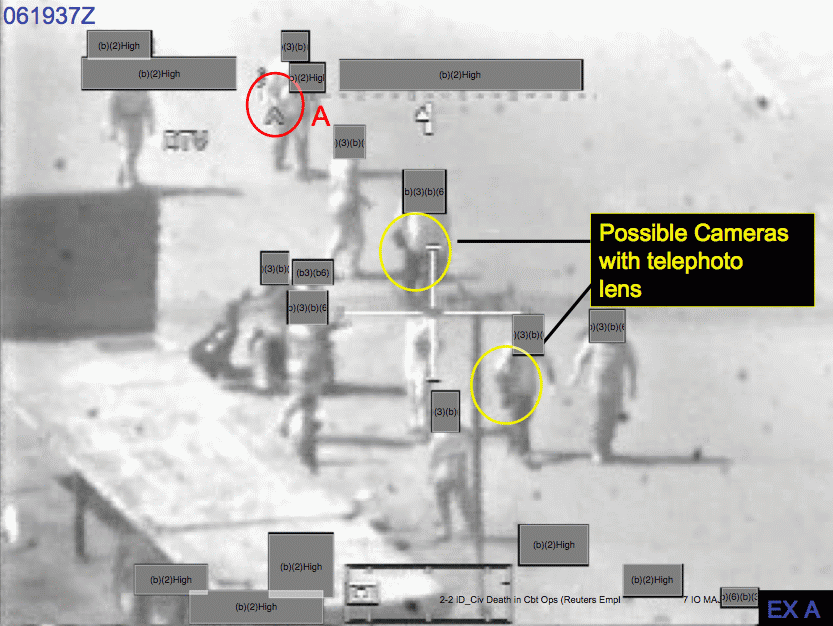 Before he killed himself in Dodge Center, Minnesota, 30-year-old Iraq veteran Danny Holmes would often sit in front of his computer screen looking at photographs in a file marked “Iraq/Graphic.” When he did this, his girlfriend relayed, his lower lip twitched. The pictures had been taken for the U.S. military’s after-action report on an Apache helicopter attack in Iraq on July 12, 2007. The attack became infamous in 2010, when Julian Assange and WikiLeaks released the helicopter video under the title “Collateral Murder.”

As Vijay Prashad wrote on CounterPunch the other day, among the crimes against the state, meaning the U.S. government, which are the real reason for Assange’s persecution, imprisonment and impending hearing in a British court, none so embarrassed war apologists as release of that video, which records in pitiless detail the attack on twelve men and two children.

Among the dead were a Reuters photographer, 22-year-old Namir Noor-Eldeen, and his driver and assistant, 40-year-old Saeed Chmagh. The Apache gunners would not have seen the children; they were in a van driven by a man, their father, who, with two other Good Samaritans, had tried to rescue the injured Chmagh. I call them Samaritans because there is no good reason to believe otherwise. They did not return fire and were not armed. The U.S. gunners speculated that they were insurgents, just as they had speculated that the cameras Noor-Eldeen and Chmagh carried were weapons. The after-action report determined that everything that led up to this scene of unspeakable carnage had been justified. So, as Vijay notes, did David Finkel, an embedded reporter for the Washington Post, whose account of the attack in his 2009 book, The Good Soldiers, reads like a war crime but concludes that 140 rounds from the Apache’s 30-millimeter cannon on a group of people who were taking no aggressive action is but one more reality of war that the rest of us, comfortable in our opinions, unthreatened, hopelessly out-of-context, can never understand and ought not question.

Except there is the problem of Danny Holmes.

We know his story, too, because of Finkel, who followed members of the battalion he was with once they got home, and wrote vividly about their tribulations in his 2013 book, Thank You for Your Service.

The battalion swept in after the attack, and at least one of the soldiers with Holmes took pictures to document what had happened. Such pictures are supposed to be classified, but soldiers took classified pictures home all the time from Iraq, sometimes making them into trophy reels. Finkel describes the after-action photos that fixated Danny Holmes thus:

The war, in other words, as it was experienced by the soldiers who were in it.

The grainy black-and-white images from “Collateral Murder,” disturbing as they were, had nothing on these photographs.

Danny showed them to his 19-year-old girlfriend, Shawnee, two years before he took his life. He told her he’d killed “quite a few” people in the war and said he wasn’t bothered by it. Yet she had seen him, twitching. He didn’t talk much about the war. The story he told most often was of being in a firefight with a man who was also holding a little girl. Danny said he shot the man and the child, too; he had no choice. The story was sometimes detailed, the girl 3 years old with long dark hair, but vague as to time and location; no one in the battalion was able to confirm it. But there was Danny, waking up from another nightmare, telling Shawnee, “I see children everywhere.”

The little girl who was carried from her father’s van after the attack was 3 or 4 years old. She had glass in her eyes and hair, and had sustained a belly wound. One of the soldiers who discovered the children in the van turned around, vomited and ran, according to former Specialist Ethan McCord, who carried the girl out and then went back for her brother, who was 7 or 8 and had a head wound. McCord told the World Socialist Web Site years later that with the little girl in his arms, he thought of his own daughter. His platoon leader shouted, “Stop worrying about these motherfucking kids.” Back at the base, after cleaning the children’s blood off his uniform, McCord went to his staff sergeant, saying he needed to see someone in mental health. “Quit being a pussy,” McCord says he was told.

Many months later, when he returned to the States, McCord considered putting a bullet in his head, “but each time I thought about that, I would look at the pictures of my children and think back on that day and how the father of those children was taken away and how horrible it must be for them.”

After WikiLeaks published the video, in 2010, McCord started having nightmares again, and “the anger, the feeling of being used, it all came back.” He and another member of the company, former Specialist Josh Stieber, who had not been at the scene that day, wrote an open Letter of Reconciliation & Responsibility to the Iraqi People. In it they acknowledged their responsibility “for bringing the battle to your neighborhood” and asked for forgiveness because “We did unto you what we would not want done to us.”

Danny Holmes had a daughter with his girlfriend. After the child’s birth, according to Shawnee, he told the hallucinated story of killing a little girl in Iraq more frequently. In his second book, David Finkel scorns the “absolutes and certainties” of those who viewed the WikiLeaks video in horrified anger, and does nothing to undercut his own certainty, from the first book, that the attack was justified. Of all the damaged veterans whose stories Finkel tells, though, Danny Holmes is the only one we see staring at images of the people whose bodies were exploded by 30-millimeter cannon blasts.

Danny was 32 when he killed himself. He had declined markedly from the time Shawnee met him at a party. He would get angry, scary. He asked her to hide his knife collection. She asked him to get help, he said he would, he never did—a familiar story. On the last day of his life she had made plans to go out with friends at night. “I need to talk,” he said that morning, but she had laundry to do, then tanning; “I want to talk”…“Will you please talk to me?”…while she cleaned the house, washed the car, showered and got ready to go. She drank too much that night, got pulled over, spent the night in jail, and came home at dawn to find her man hanged on the staircase by his military-issue parachute cord.

Shawnee figured he had tied one end of the rope to the top of the staircase, looped the other end around his neck and made a running leap. The 911 operator told her to cut him down. There was a sound, “a boing,” she told Finkel, that played over and over in her head. The coroner said it probably took Danny 10 minutes to die. When she went up to their baby’s room, she found a pillow on the floor beside the crib. She wondered whether Danny had laid their before he jumped, saying goodbye to his daughter.

Shawnee, 21 by then, might have been any American on that day full of distractions, and Danny any haunted soldier. For the country at large, the distractions have multiplied many times over since then, which only partly explains why there has been no mass outcry for Chelsea Manning, who first saw and leaked the Apache videotape, and who is in jail once again for refusing to help the U.S. government prosecute Assange; and no mass outcry for Assange; and no mass movements against the wars; and no particular concern for the dead and maimed, including the 60,000 U.S. veterans who committed suicide between 2008 and 2017, according to a report last year from the Department of Veterans Affairs.

McCord and Stieber had emphasized in their open letter “that what was shown in the WikiLeaks video only begins to depict the suffering we have created.” The enormity of suffering is what ate up Danny Holmes. It is the point Manning and Assange made in exposing secrets of the U.S. war machinery, risking their freedom and their lives. It is the point, actually, that Finkel makes in his books, only Finkel says he has no agenda other than to explain the realities of war to Americans. For that he was awarded a “genius grant.” The soldiers, on the other hand, unextolled, opposed “the destructive policies of our nation’s leaders” and made a plea for honoring “our common humanity.”

That was a decade ago. We are no closer to it. Assange is a public enemy.

Somehow, though, the soldiers’ letter did get to Ahlam Abdelhussein Tuman, the widow of the man who’d been driving the van in Iraq, and the mother of the children McCord had carried out. In 2010 she told the Times of London: “I can accept their apology, because they saved my children, and if it were not for them, maybe my two little children would be dead.”

She added: “I would like the American people and the whole world to understand what happened here in Iraq. We lost our country and our lives were destroyed.”

JoAnn Wypijewski is the author of What We Don’t Talk About When We Talk About #MeToo: Essays on Sex, Authority & the Mess of Life. This article was originally featured at Counterpunch and is republished with permission.