The 1950's Anti-Communist Hysteria: What Was All the Fuss About?

The 1950's Anti-Communist Hysteria: What Was All the Fuss About? 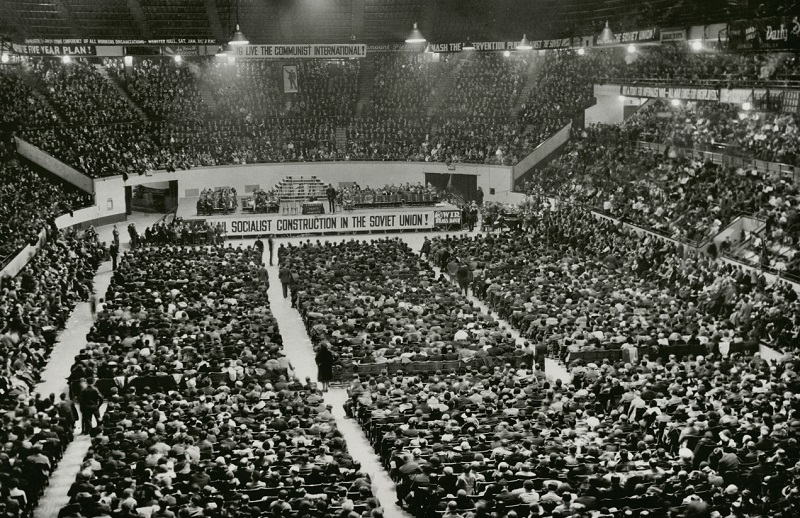 CPUSA in a happier decade for them in the 1930s

I came to political awareness in the height of the anti-Communist movement in 1956.
I was brought into the conservative movement at a lecture by the Australian anti-Communist physician Fred Schwarz. I have told my story in a collection of reminiscences by 82 libertarians, I Chose Liberty. You can read it here (pages 239ff.).
Historians usually date the rise of the conservative political movement in the United States with the 1948 hearings that were triggered by Whittaker Chambers’ accusation that former State Department official Alger Hiss was not only Communist, but a spy for the Soviet Union. At the time, Hiss was the head of the Carnegie Endowment for International Peace. I find that ironic. So did a lot of other anti-Communists at the time.
This issue divided the nation. The Left and intellectuals generally sided with Hiss. Millions of common people sided with Chambers. Richard Nixon, a first-term congressman, sided with Chambers. That made Richard Nixon’s career when Hiss was sentenced to prison for perjury on January 1950. He was elected to the U.S. Senate the following November.
Then came McCarthy’s accusations, beginning in 1950 and continuing through 1954. He created a sensation, or really a series of sensations, regarding his accusations of communist infiltration in the federal government. My friend M. Stanton Evans’ book on McCarthy, Blacklisted by History, indicates that a lot of these accusations were correct. Evans was a first-rate journalist, a first-rate historian, and one of the best writers in the conservative movement. It has been systematically forgotten that William F. Buckley and his brother-in-law, L. Brent Bozell, co-authored a book in 1955 defending McCarthy: McCarthy and His Enemies.
I also grew up in an era in which there were accusations about Communist infiltration of Hollywood. Well, there really was Communist infiltration of Hollywood. The Left-wing President of the Screen Actors Guild, Ronald Reagan, carried a pistol in a shoulder holster because of his anti-Communist statements, which had generated death threats against him. There was a series of congressional hearings on Communist infiltration in Hollywood that got a lot of attention. There was a blacklist of Communist writers, including Dalton Trumbo. They could not get jobs. This made the Left angry, because they think they are the only ones who are allowed to conduct boycotts against ideological enemies. It still angers them that, this one and only time, the Right stuck it to a tiny handful of limousine Communists. The Left really does believe that advocating violent revolution is neither here or there, and nobody should suffer a paycheck cut because of it.
It is almost impossible to find any trace of Communism in any movie that anybody still watches. That was true at the time. There are Left-wing causes in movies. In Hollywood, these been common since the 1930’s. But the great change in Hollywood came in 1960, with the release of Inherit the Wind and Elmer Gantry. These were not political movies. They were social movies. They were opposed to Protestant fundamentalism. They represented the great reversal of the enormous success of Ben Hur in 1959. That was when the second-generation of humanist activists in Hollywood took over. The founders of Hollywood’s movie empire were non-Orthodox Jews, but most of them were socially conservative in public and pro-American. Beginning in 1960, this began to change. The best book on this was written by an Orthodox Jew, Michael Medved, Hollywood vs. America.
Read more at GaryNorth.com