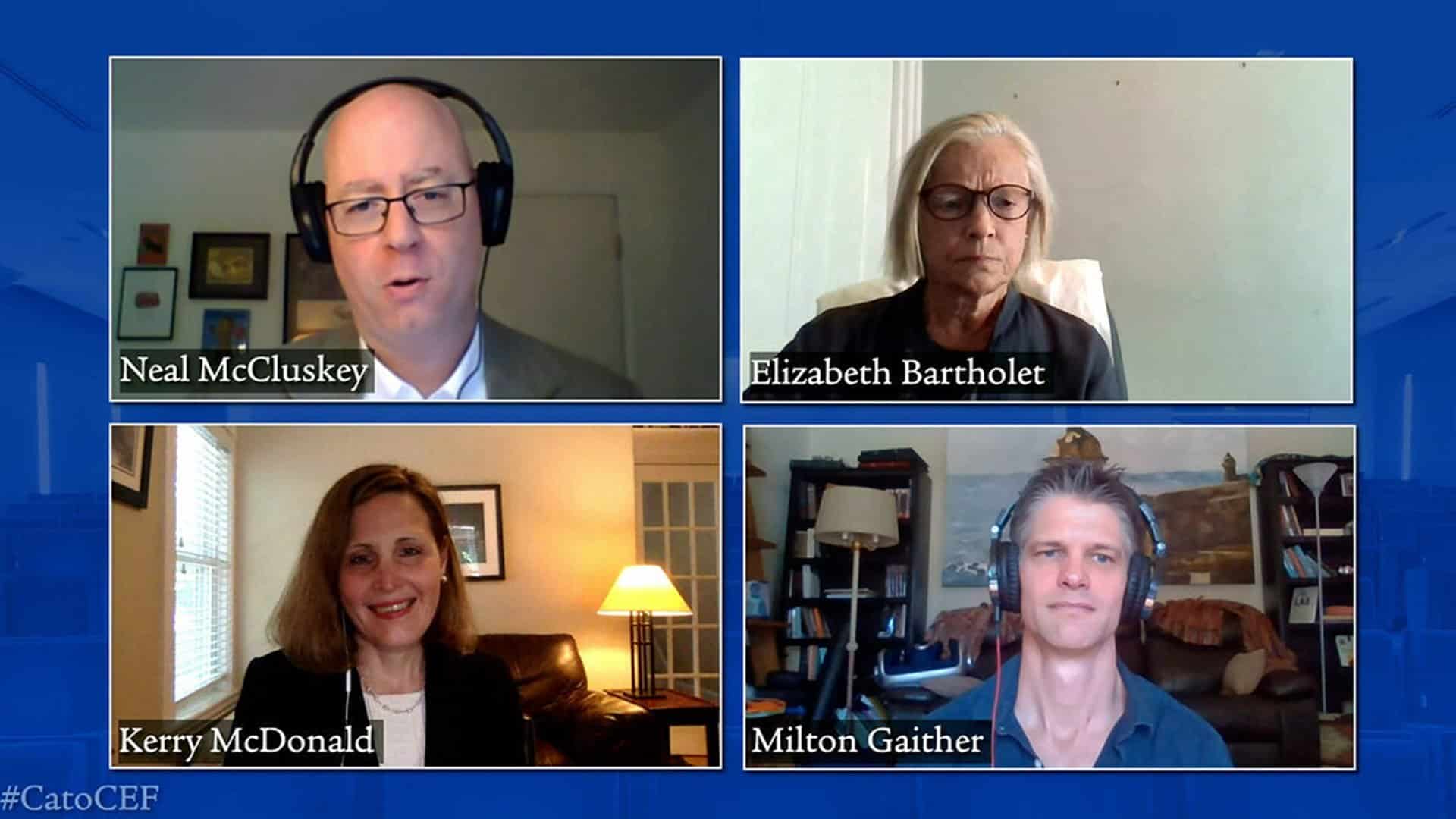 It’s not just about homeschooling.

On Monday, I debated the Harvard professor who proposes a “presumptive ban” on homeschooling. Thousands of viewers tuned in to watch the live, online discussion hosted by the Cato Institute. With 1,000 submitted audience questions, the 90-minute webinar only scratched the surface of the issue about who is presumed to know what is best for children: parents or the state. Here is the replay link in case you missed it.

Last week, I outlined much of my argument against Harvard Law School professor Elizabeth Bartholet that I incorporated into our debate, but here are five takeaways from Monday’s discussion:

1. There Are People Who Believe the State Should Be Your Co-Parent

While this event was framed as a discussion about homeschooling, including whether and how to regulate the practice, it is clear that homeschooling is just a strawman. The real issue focuses on the role of government in people’s lives, and in particular in the lives of families and children. In her 80-page Arizona Law Review article that sparked this controversy, Professor Bartholet makes it clear that she is seeking a reinterpretation of the US Constitution, which she calls “outdated and inadequate,” to move from its existing focus on negative rights, or individuals being free from state intervention, to positive rights where the state takes a much more active role in citizens’ lives.

During Monday’s discussion, Professor Bartholet explained that “some parents can’t be trusted to not abuse and neglect their children,” and that is why “kids are going to be way better off if both parent and state are involved.” She said her argument focuses on “the state having the right to assert the rights of the child to both education and protection.” Finally, Professor Bartholet said that it’s important to “have the state have some say in protecting children and in trying to raise them so that the children have a decent chance at a future and also are likely to participate in some positive, meaningful ways in the larger society.”

It’s true that the state has a role in protecting children from harm, but does it really have a role in “trying to raise them”? And if the state does have a role in raising children to be competent adults, then the fact that two-thirds of US schoolchildren are not reading proficiently, and more than three-quarters are not proficient in civics, should cause us to be skeptical about the state’s ability to ensure competence.

I made the point on Monday that we already have an established government system to protect children from abuse and neglect. The mission of Child Protective Services (CPS) is to investigate suspected child abuse and punish perpetrators. CPS is plagued with problems and must be dramatically reformed, but the key is to improve the current government system meant to protect children rather than singling out homeschoolers for additional regulation and government oversight. This is particularly true when there is no compelling evidence that homeschooling parents are more likely to abuse their children than non-homeschooling parents, and some research to suggest that homeschooling parents are actually less likely to abuse their children.

Additionally, and perhaps most disturbingly, this argument for more state involvement in the lives of homeschoolers ignores the fact that children are routinely abused in government schools by government educators, as well as by school peers. If the government can’t even protect children enrolled in its own heavily regulated and surveilled schools, then how can it possibly argue for the right to regulate and monitor those families who opt out?

2. Random Home Visits Will Be a Weapon of the State

Of all the recommendations included in the Harvard professor’s proposed presumptive ban on homeschooling, the one that caused the most uproar among both homeschoolers and libertarians was the call for regular home visits of homeschooling families, with no evidence of wrongdoing.

In my remarks during Monday’s debate, I included a quote from a Hispanic homeschooling mother in Connecticut who was particularly angry and concerned about imposing home visits on homeschooling families. (According to federal data, Hispanics make up about one-quarter of the overall US homeschooling population, mirroring their representation in the general US K-12 school-age population.) She made the important point that minority families are increasingly choosing homeschooling to escape discrimination and an inadequate academic environment in local schools. She also pointed out that, tragically, it is often minorities who are most seriously impacted by these seemingly well-meaning government regulations. Writing to me about Professor Bartholet’s recommendation, she said:

“To state that they want to have surveillance into our homes by having government officials visit, and have parents show proof of their qualified experience to be a parent to their own child is yet another way for local and federal government to do what they have done to native Americans, blacks, the Japanese, Hispanics, etc in the past. Her proposal would once again interfere and hinder a certain population from progressing forward.”

Anyone who cares about liberty and a restrained government should be deeply troubled by the idea of periodic home visits by government agents on law-abiding citizens.

3. Private Education Is in Danger

Despite the landmark 1925 US Supreme Court decision that ruled it unconstitutional to ban private schools, there remains lingering support for limiting or abolishing private education and forcing all children to attend government schools. Homeschooling is just one form of private education.

In her law review article, Professor Bartholet recommends “private school reform,” suggesting that private schools may have similar issues to homeschooling but saying that this topic is “beyond the scope” of her article. Still, she concludes her article by stating that “to the degree public schools are seriously deficient, our society should work on improving them, rather than simply allowing some parents to escape.”

The government should work to improve its own schools, where academic deficiencies and abuse are pervasive. But it should have no role in deciding whether or not parents are allowed to escape.

Some advocates of homeschooling regulation suggest that requiring regular standardized testing of homeschoolers would be a reasonable compromise. In her law review article, Professor Bartholet recommends: “Testing of homeschoolers on a regular basis, at least annually, to assess educational progress, with tests selected and administered by public school authorities; permission to continue homeschooling conditioned on adequate performance, with low scores triggering an order to enroll in school.”

During Monday’s debate, I asked the question: By whose standard are we judging homeschoolers’ academic performance? Is it by the standard of the government schools, where so many children are failing to meet the very academic standards the government has created? I pointed out that many parents choose homeschooling because they disapprove of the standards set by government schools. For example, in recent years schools have pushed literacy expectations to younger and younger children, with kindergarteners now being required to read. If they fail to meet this arbitrary standard, many children are labeled with a reading deficiency when it could just be that they are not yet developmentally ready to read.

Indeed, as The New York Times reported in 2015: “Once mainly concentrated among religious families as well as parents who wanted to release their children from the strictures of traditional classrooms, home schooling is now attracting parents who want to escape the testing and curriculums that have come along with the Common Core, new academic standards that have been adopted by more than 40 states.”

A key benefit of homeschooling is avoiding standardization in learning and allowing for a much more individualized education. And it seems to be working. Most of the research on homeschooling families conducted over the past several decades, including a recent literature review by Dr. Lindsey Burke of the Heritage Foundation, finds positive academic outcomes of homeschooling children.

There are very few movements today that bring together such a diverse group of people as homeschooling does. Families of all political persuasions, from all corners of the country, reflecting many different races, ethnicities, classes, cultures, values, and ideologies, and representing a multitude of different learning philosophies and approaches choose homeschooling for the educational freedom and flexibility it provides. Homeschoolers may not agree on much, but preserving the freedom to raise and educate their children as they choose is a unifying priority. In times of division, homeschoolers offer hope and optimism that liberty will prevail.

Kerry McDonald is a Senior Education Fellow at FEE and author of Unschooled: Raising Curious, Well-Educated Children Outside the Conventional Classroom (Chicago Review Press, 2019). She is also an adjunct scholar at The Cato Institute and a regular Forbes contributor. Kerry has a B.A. in economics from Bowdoin College and an M.Ed. in education policy from Harvard University. She lives in Cambridge, Massachusetts with her husband and four children.