A Farewell to Mars

A Farewell to Mars 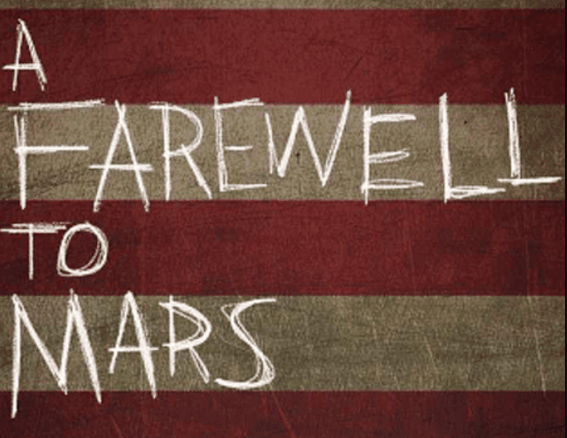 I hate to admit that my amazing title for this article was shamelessly stolen from one of my favorite books of the same title. The aforementioned book is by Evangelical Pastor, Brian Zahnd. He seems to be proposing a way to view violence and militarism that differs from the typical American Evangelical.

I do not believe that Zahnd is a libertarian, but he seems to be sympathetic to many of our positions, and his book came as a welcome relief as it helped to sharpen my political stance when it comes to matters of war and peace.

When I began my journey into the blackhole of libertarianism, I found that my instincts seemed to push back the hardest against antiwar rhetoric. I would even go so far as to say that I was offended. This led to some soul searching on my part to see if my offense was warranted.

Another huge piece of my puzzle involved my knowledge of the New Testament. While it can hardly be described as vast, I can sound reasonably informed if a conversation was to touch on the topic. After further thought and some reading it was soon apparent that it was my pro war stance that was incompatible with the teachings of Jesus and my libertarian instincts.

How can one justify war when the sermon on the mount as taught by Jesus, The Prince of Peace, clearly outlines that we should love our enemies, turn the other cheek, and blessed are the peacemakers?

I was reminded of my evolution recently when there was a photo of the famous televangelist, Pat Robertson, on the front page of Drudge Report along with a link to an article stating that Trump was going to “lose the mandate of heaven” for pulling troops from Northern Syria.

“Wow” I thought. I knew that my religious upbringing had something to do with my reluctance to embrace a staunch antiwar position, but I do not recall ever hearing anything so blatant. However anyone feels about Robertson, I am sure that he has forgotten more about the life of Jesus and church history than I will ever know, and the position is even well past the “Just War” position made famous by St. Thomas Aquinas and Augustine.

Many church leaders, including Aquinas, did not go far enough in outlining what constitutes as a “just war.” However, in their defense, I don’t think they had any idea of the total costs of the total wars that were waged in the 20th and 21st centuries.

Historically, pacifism was common in early Christian thought. It seems that when Christianity became the official religion of the Roman Empire that the majority of opinion shifted from pacifism to “Just War”.

Throughout church history, church leaders debated the biblical understanding of pacifism to see if they could get the Bible to accommodate a Just War position, but there are still many more people in modern Christianity that maintain the pacifism position.

I wish that Christian men would insist more and more on the unrighteousness of war, believing that Christianity means no sword, no cannon, no bloodshed, and that, if a nation is driven to fight in its own defence, Christianity stands by to weep and to intervene as soon as possible, and not to join in the cruel shouts which celebrate an enemy’s slaughter.

Yahweh is often portrayed as prohibiting soldiers from using war as an occasion to advance their own self-interests (e.g. pillaging) or satisfying personal decadent desires (e.g. raping). Similarly, Yahweh forbade those who served as temple priests to engage in violence. When the New Testament later refers to the body of Christ as a royal priesthood, this is at least part of what it has in mind. While non-followers of Jesus may consider the use of violence in certain “justified” circumstances to be necessary, if not praiseworthy, the royal priesthood of Jesus followers are called and empowered to bear witness to God’s non-violent ideal by altogether abstaining from it.

My point is that, regardless of whether or not we can adequately explain the apparent contradiction between the violent strand of the OT with Jesus’ radical example and teachings about loving our enemies, this shouldn’t qualify our commitment to follow Jesus’ example and obey his teachings in the least. Our call is to mimic the crucified savior, not the “warrior” portrait of Yahweh we sometimes find in the OT (Ex. 15:3).

Finally, from Brian Zahnd whose work motivated this article in part:

We forget that when we see Christ dead upon the cross, we discover a God who would rather die than kill his enemies. We forget all of this because the disturbing truth is this—it’s hard to believe in Jesus. (Taken from A Farewell to Mars).

The problem with our “change the world” rhetoric is that it is too often a thinly veiled grasp for power and a quest for dominance—things that are antithetical to the way Jesus calls his disciples to live. (Taken From Beauty Will Save the World: Rediscovering the Allure and Mystery of Christianity)

I would assume that the American Evangelical has a unique and therefore a harder time making the adjustment to an antiwar stance. As they are experiencing a smattering of propaganda from an array of sources. As a thought experiment, try to picture an early church follower reciting the Pledge of Allegiance. Many were martyred for refusing to make similar assertions. Also, here is a job for the more theologically literate, but do a line by line critique of the Battle Hymn of the Republic. I have heard one here, and it is pretty interesting.

Although I do not believe policy will ultimately be affected; it is no secret that at minimum the Evangelical is pandered to during election season by so called mainstream conservatives, and if nothing else, a conversation could be started, and a viable antiwar stance could come from the American right. Also, if the late Andrew Breitbart was correct about politics being downstream from culture, there might be hope for US foreign policy in the future and a weakening of the American Civil Religion.

Phillip Pittman is an accountant, consultant, and serial entrepreneur. He is the Father of three kids and has a beautiful wife. They all live in the Metro-Atlanta Area.

Phillip can be reached at phillip@theupsizedown.com. You will soon be able to find more of his thoughts at withdrawfromthesystem.com