After Calling Out Obama for Starting War with Iran to Get Re-Elected, Trump Doing Same Thing

After Calling Out Obama for Starting War with Iran to Get Re-Elected, Trump Doing Same Thing 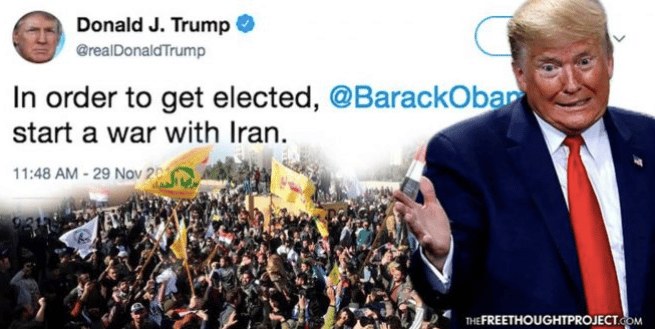 Thousands of angry protesters stormed the US Embassy in Iraq this week after US airstrikes killed dozens of Iraqi militia men who were actually fighting terrorists. As they shouted “Down USA!” many of the protesters broke through the gate after hurling water bottles, setting fires and smashing security cameras outside the embassy. When news of the protest broke, Donald Trump, without proof, took to Twitter and immediately blamed Iran—for the thousand of Iraqis protesting in Iraq.

“Iran killed an American contractor, wounding many,” Trump tweeted. “We strongly responded, and always will. Now Iran is orchestrating an attack on the U.S. Embassy in Iraq. They will be held fully responsible. In addition, we expect Iraq to use its forces to protect the Embassy, and so notified!”

The American contractor, to whom Trump is referring was reportedly killed during an alleged attack on an Iraqi military base. After the alleged attack, Trump immediately blamed Iran via the Iraqi Shi’a militia. US officials offered zero proof that Ketaib Hezbollah was behind the alleged attack, but did say the group has links to Iran’s Quds Forces. Iran immediately denied any involvement and called the US response a “clear example of terrorism.”

Knowing America’s propensity toward raining down hellfire from above in dramatic over reactions, after the alleged attack on the military base, Iraqi officials pleaded with the U.S. to stave off bombing their country. These requests fell on deaf ears and U.S. airstrikes on targets in Iraq and Syria on Sunday killed at least 25 fighters and injured dozens more.

Iraqi Prime Minister Adel Abdul-Mahdi on Sunday called the U.S. strikes “a violation of Iraqi sovereignty and a dangerous escalation that threatens the security of Iraq and the region.”

Prior to the strikes on Sunday, Iraqi officials also warned that any strikes inside their sovereign borders would have dangerous consequences. They say that it has forced the Iraqi government to “review” its relations with the US, according to Antiwar.com.

Despite the US referring to Ketaib Hezbollah and other Iraqi Popular Mobilization Units (PMU) forces as “Iranian forces,” the groups function to fight ISIS in Iraq and are part of the Iraqi government’s security forces. As Jason Ditz points out, the Trump Administration has at times spoken ill of the PMU, but must also have known that attacking them on Iraqi soil would be a bridge too far for Iraq’s government to cross.

Indeed, that appears to be the case. Now, we are watching Donald Trump saber rattle with Iran in an attempt to start a war that he was so hell bent on exposing a decade ago. When his predecessor Barack Obama was attempting to start a war with Iran, Trump accused him of doing so to boost his poll numbers and to get reelected. Now Trump is taking a page out of the previous warmonger and chief’s manual and appears to be doing the same thing. For those who may be unaware, the plan to overthrow Iran has long been in the works but their military and status makes them a harder target than Iraq or Afghanistan. In fact, in April 2012, Pulitzer Prize-winning journalist, Seymour Hersh reported that the U.S. Joint Special Operations Command had trained (Mojahedin-e Khalq) MEK operatives at a secret site in Nevada from 2005 to 2009. MEK is the Iranian political-militant organization that advocates for the violent overthrow of the current Iranian regime. They are hardly quiet about it.

Coincidentally, MEK was classified as a terrorist organization by the United States and its allies—during this training period—until they suddenly removed them from the list in 2012.

While the current Iranian regime is certainly no bastion of freedom, the idea that US intervention or a violent revolution would be beneficial for the people of Iran is outright insane. To see what US intervention—through military support and the support of ‘protesters’—does to countries, one need only look at Syria, Iraq, Afghanistan, and Libya to see the horrific death tolls and war-ravaged dystopias left in America’s wake. Libya went from being a growing wealthy country to the hellish war ravaged state that it is today in which humans are being openly bought and sold in public spaces.

To those paying attention over the years, Trump’s desire to intervene in Iran, and his subsequent support in the media should come as no surprise as it has been the plan since Bill Clinton was in office and was documented in the neoconservative PNAC report. This was even admitted by General Wesley Clark, former Supreme Allied Commander of NATO, that the U.S. planned on going to war with Iran, according to a 2001 memo from the U.S. Secretary of Defense.

“This is a memo that describes how we’re going to take out seven countries in five years,” Clark said. “Starting with Iraq, and then Syria, Lebanon, Libya, Somalia, Sudan, and finishing off with Iran.”

All presidential regimes since Clinton have crossed countries off this list. Now, Trump will likely get four more years to try. Remember that when US troops are being used as cannon fodder and come home limbless and in boxes, and innocent children are being turned into a fine red mist by drone strikes in a country who is not attacking the United States — that this is your government — “fighting for your freedom.”