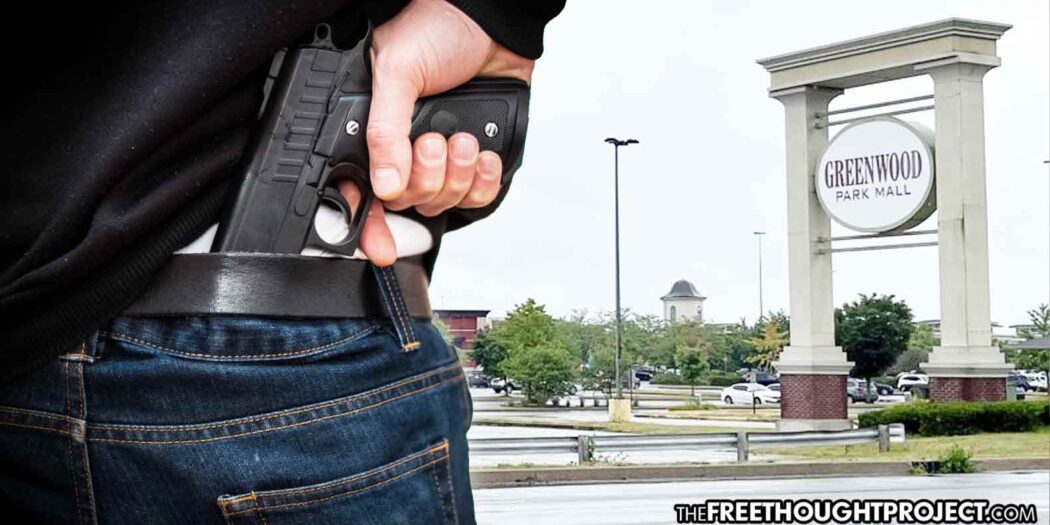 In Greenwood, Indiana, residents who visit the Greenwood Park Mall are not allowed to carry guns. This policy makes the mall an easy target for deranged psychopaths who wish to cause harm to others as they know their victims won’t be able to defend themselves. This is likely why a deranged psychopath chose the mall on Sunday and began murdering innocent people.

Three people were fatally shot and two were injured when a mass shooter opened fire inside the Greenwood Park Mall and while this is certainly tragic—it could’ve been far worse.

As FOX 59 reports, last updated in April 2020, Simon Property Group states in its code of conduct that no weapons are allowed at their shopping centers. The group is the owner of the Greenwood Park Mall.

Fortunately for the folks inside the mall, a 22-year-old man from Bartholomew County decided not to obey the order to disarm himself before entering the mall. When the mass murdering psychopath began killing people inside, this 22-year-old hero pulled out his handgun and stopped the threat.

The Good Samaritan, as police called him, was a licensed concealed carry permit holder. Despite the man disobeying the order, the police chief and the mayor are offering up their praises as his heroism and defiance likely saved countless innocent lives.

“The real hero of the day was the citizen that was lawfully carrying a firearm in the food court and was able to stop the shooter almost as soon as he began,” Greenwood Police Chief James Iso said.

“Someone we are calling the ‘Good Samaritan’ was able to shoot the assailant and stop further bloodshed. This person saved lives tonight. On behalf of the City of Greenwood, I am grateful for his quick action and heroism in this situation,” Greenwood Mayor Mark Myers said.

This mass shooting is just one of many mass shootings that have rocked the country in recent months and had this good Samaritan not been there, it could have been one of the worst.

“We are sickened by yet another type of incident like this in our country,” Indianapolis Assistant Chief of Police Chris Bailey said of the shooting.

Luckily for this hero, police didn’t arrive on the scene until after the threat was eliminated. Had they been there at the same time, the hero could have been shot and killed. Such was the case with Johnny Hurley who stopped a mass shooting in its tracks only to be gunned down by a responding officer—who stalked him for 11 seconds before shooting him in the back.

According to the FBI, good guys with guns—who are not police officers—have stopped multiple mass killings, and they do so routinely. According to the FBI report, citizens successfully intervened in 6 active shooter events in 2020 and 2021.

In one incident, according to the FBI, seven employees exchanged multiple volleys of gunfire with the shooter, four of them during the final encounter resulting in the death of the shooter. This incident unfolded at Jefferson Gun Outlet, Metairie, LA.

In another, a teacher disarmed and detained a student who began a mass shooting at Rigby Middle School in Idaho.

As the report notes, citizens “successfully” ended the shooting by confronting the shooter—not police.

“Their selfless actions likely saved many lives,” the report stated.