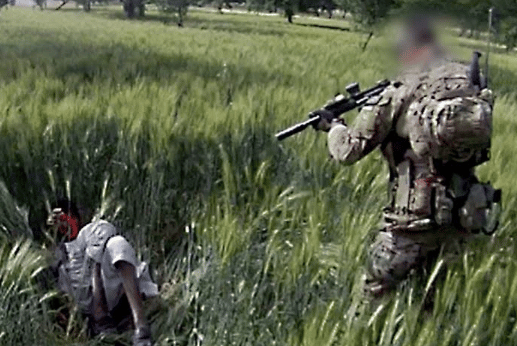 Australia has a proud military history, even before it was a federation in 1901 it had sent men abroad in service of Empire. Still a new nation while the British fought bitterly against the Boers in South Africa, the Australian military identity was slowly forged in incidents of undeniable heroism and controversy. Famously, the Australian soldier Breaker Morant became an Australian hero, elsewhere he was a revenge minded man who executed unarmed Boer prisoners and likely civilians. He was tried and executed, perhaps as an example by the British as such conduct was not rare in an ugly war. Morant’s legacy however would run on in most theatres for over one hundred years of Australian military service.

In the World Wars the Australians were notorious for heroic conduct and fighting with a respected ferocity. They were not above executing prisoners. This was not unique to the Australian soldier, they were not above it either. Intimate savagery was not unlawful it was expected to be found inside the heat of battle and soon after as the fog of war lingered. It is not a statement of good and evil, merely one of fact. Most if not all sides in war have had soldiers that do this to others. It is the disregard and acceptance of such actions that brings into question the society and culture that not only continues to conduct war abroad but condones all its horrible outcomes with pride. That is the Australian character regarding its wars and war fighters.

The recent emergence of footage of an Australian SASR troops murdering an unarmed man as he prayed in a field somewhere in Afghanistan has not raised much controversy inside of Australia. It has mildly been reported but mostly buried beneath the concerns about COVID-19 and the potential shortages on toilet paper for most Australian voters. The military however, still abroad, still killing are always above reproach. As with most released footage incidents it beckons just how common such events are, given the confidence of those who are being recorded. To kill an unarmed man as shown in the clip is almost routine.

In June 2019 the Australian Federal Police raided the homes of journalists, most of those raided worked for the state-run ABC network. The raids were a response to a 2018 report about the Australian intelligence agencies using their powers to spy on Australian citizens. For most Australians such a revelation and the frightening response on journalists was met with apathy and an eager trust in the governments wisdom when it comes to their defense. It was assumed by some that such measures taken by the AFP would not only keep Australians alive, the terrorists at bay but most of all save Australian soldiers lives. Australian soldiers still fighting an unwinnable war inside Afghanistan.

Australians love war. They always have. Every year in April the nation indulges in a ritual to celebrate the lives of martyrs that served the British empire in a brutal war, the date commemorates the invasion of mainland Turkey in 1915. The heroism is never in doubt, the rationale reason for the war is however never truly sought. It assumed as a righteous destiny of the Australian soldier to be overseas in the service of a larger imperial partner. Korea, Vietnam, Iraq or Afghanistan it does not matter, it is the right of the Australian soldier to be there. That is the imbedded belief of the citizen as they stand for dawn service each April 25.

So as news reports and whistle-blowing soldiers from both Australia and New Zealand share their experiences in Afghanistan with shaky voices they are met with wary ears and sometimes distain. When former defense lawyer David McBride revealed what became known as the “Afghan Papers” much of it revealing unlawful killings by Australian SAS members he was charged for leaking classified materials, though the content was never disputed or denied. The Australian government simply did not want the truth of bloodshed to become exposed to the public but more importantly to foreigners that have a glowing opinion of the Australian nation.

Now with such graphic footage of an Australian special forces member murdering an unarmed man it is hard to deny the claims of the whistle-blowers. Even if the executed man was a horrible mass murdering terrorist, he was unarmed and vulnerable. His capture could have provided intelligence and many hours of painful debriefing at the hands of coalition interrogators. Instead it is likely this man had nothing to offer alive, so he was executed by the elites of the Australian military.

What the outcome is, remains uncertain. Perhaps a tighter grip on the release of such footage. It is alleged that the SAS soldier in the clip was stood down, how would we know given the secrecy of the SAS and how precious trained and experienced soldiers at his level are.  With the COVID-19 pandemic it is likely that the Australian government will use the fear and concerns to help widen its already immense powers over the citizenry’s lives. No matter how incompetent it reveals itself in either health or security it is without competition.

It would take an elite level of mercenary and psychotic mentality to visit upon a land thousands of kilometres away from home and to then execute a man already on his knees as he prays to his God close to his own house. A stranger In shock, frightened and pleading for his life is then killed. This is the war that continues to be waged in many of our names, and this is the horrors that distant strangers face because it is our foreign policy to kill out of our own insecurities and our governments need to rule in any capacity.

The Australian Police are investigating the allegations in a recent incident of an SAS soldier Ben Robert-Smith who kicked a handcuffed prisoner off a cliff and ordered his killing. Smith is a highly decorated hero of the war. The outcome of such an investigation and trial will be telling. But what it does reveal is the harshness of those elites pressed into long periods of service in a war that few understand other than it must somehow go on.

So, for the time being, hidden among the news of pandemic the crimes of war will trickle to the screens of those who care. The few watchdogs that exist will limply bark into a mob desperate for their own creature comforts as they face quarantine. The war, those endless epidemics of government cruelty will go on. The futility of Australia’s mission in Afghanistan will most likely continue, even if in secret. And the recent incident so graphically captured on film is just another contact.