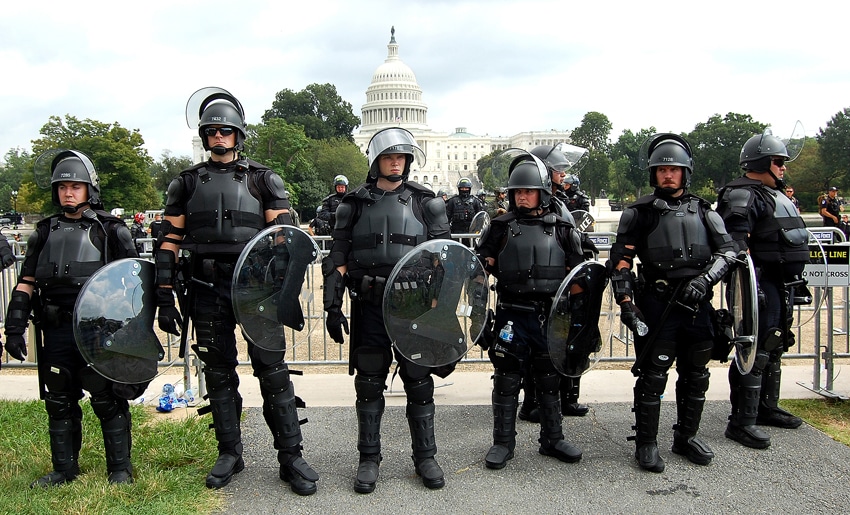 Many Americans would be happy to never hear about January 6 again. No such luck. Vice President Kamala Harris equated January 6 with 9/11 and threw in Pearl Harbor to score a trifecta. Biden endlessly invoked January 6 in his speeches supporting Democrats in the mid-term congressional elections. In August, Biden denounced Republicans for “semi-fascism.” In September, he claimed that MAGA Republicans (which effortlessly became all Republicans) “embrace political violence.” In a preview of Biden’s speech last week, Politico accurately forecast that Biden will “again put center stage the danger and chaos posed by election deniers…He will link Republicans to the extremists who attempted to forcibly overturn the results of Donald Trump’s defeat.”

Since Biden is running for re-election, he will likely be perpetually flogging January 6 in his speeches between now and November 2024. Thus, it is worthwhile to have a closer analysis of Biden’s speech and the continuing effort to exploit January 6 to vilify political dissent.

In his White House speech last week, Biden repeated his efforts to portray January 6 as a conspiracy to destroy American democracy. Biden declared that “a violent mob of insurrectionists…vandalized sacred halls,” seeking to “overthrow the will of the people and usurp the peaceful transfer of power.” Biden repeatedly slurred his pronunciation of “insurrectionists” and referred to the attacks on “July the sixth” (instead of January the sixth).

Exploiting the boundless historical illiteracy of his audience, Biden declared, “The U.S. Capitol was breached, which had never happened before in the history of the United States of America, even during the Civil War.” Actually, the British Army burned the Capitol down in 1814. But since none of the British were wearing furry horned hats, it would be unfair to compare their soldiers to the January 6 protestors.

Seeking to vivify the viciousness of the protestors, Biden lamented that a police officer he gave an award to “was tased.” Unfortunately, tasing only counts as a human rights abuse when law enforcement is on the voltage receiving end. Biden listed five police who had died (several by suicide) in the wake of January 6 but did not mention Ashli Babbitt, the only person who was gunned down and killed that day. The Capitol policeman who shot Babbitt (who was unarmed) was hailed as a hero.

Biden, staying on script, repeated his claim that the January 6 clash “was fueled by lies about the 2020 election.” And since the protestors were spurred by false claims, Biden was automatically exempted from any obligation for candor. The January 6 protestors magically become collectively guilty for anything bad that happened inside the District of Columbia for the rest of 2021.

“Today is a ceremony to honor heroes of January 6th, but we also recognize the late U.S. Capitol Police Officer, Billy Evans. Three months after January 6th, while they were still cordoning off the Capitol because threats these—by these sick insurrectionists continued to be profligated on the Internet, again, all of America saw what happened, what Officer Evans was killed defending a checkpoint you had to go through to get up to the Capitol, because of these God-awful, sick threats that continue to move forth. And the whole world saw it.”

The whole world saw what? If someone relied on Biden’s spiel, they would assume some wacko wearing a MAGA hat brutally killed a cop on Capitol Hill. Actually, Evans was killed by Noah Green, a black 25-year-old Nation of Islam zealot who struggled with hallucinations and drug addiction. After Green smashed his car into a checkpoint, he leaped out with a knife and lunged at officers before he was shot and killed. The effort to blame Evans’ death on the January 6 protestors epitomized Biden’s “close enough for government work” demonology.

Biden claimed that the checkpoint was necessary “because of these God-awful, sick threats that continue to move forth.” The media has memory-holed the militarization of Washington that Biden and congressional allies ordered in 2021. More than 10,000 National Guard troops occupied much of Washington the following months and Capitol Hill was surrounded by fences topped with barbed wire. Some skeptics believed that the ominous trappings sought to frighten members of Congress to support sweeping new anti-terrorism legislation to vilify any American who distrusted Washington.

The so-called “Temple of Democracy” looked like a Beirut bunker. Some members of Congress favored permanently turning Capitol Hill into the equivalent of a supermax prison. The American Civil Liberties Union recognized that Congress hiding behind a fence projects “the kind of message that heads of autocratic regimes send by cloistering themselves away from their populaces in armored fortresses.” The closing off of the Capitol illustrated how far politicians would go to exploit one day’s violence for an extended shutdown of the trappings of democracy.

Some January 6 protestors were violent and destructive and deserve to be sent up the river. But the Biden January 6 narrative is bolstered by endless prosecutions of folks who were little more than hapless bystanders to the violence that day. Attorney General Merrick Garland boasted last Wednesday that the January 6 “investigation has resulted in the arrest of more than 950 defendants for their alleged roles in the attack.” The total arrests far exceed the number of violent private citizens at the Capitol that day. A Justice Department press release noted, “860 defendants have been charged with entering or remaining in a restricted federal building or grounds.” Shades of Lee Harvey Oswald!

“Trespassing plus thought crimes equals terrorism” is the Biden standard for prosecuting January 6 defendants. The FBI treats every individual charged with a January 6 offense “as domestic terrorists.” Prosecutors are not formally charging January 6 defendants with terrorism because that unsubstantiated charge would be laughed out of federal courtrooms. But for Biden scoring of January 6 federal triumphs, “parading without a permit” is close enough to terrorism.

While Biden paints all the January 6 arrestees as deadly perils to democracy, federal judges are scoffing at histrionic Justice Department claims. The Washington Post reported last week that “judges in U.S. District Court in Washington…have gone below federal prosecutors’ sentencing recommendations in more than three-quarters of the cases so far.” While the Justice Department boasts of the total number of arrests, “only 69 have been convicted and sentenced so far [for felonies], mostly for assaulting police or obstructing Congress.”

The House Select Committee to Investigate the January 6 Attack conducted many hearings and issued an 845-page report on their findings. At the behest of Rep. Liz Cheney (R-WY), the committee’s final report expunged criticism of the failure of law enforcement, enraging Democratic committee staffers. This was a bizarre omission—considering that even The Washington Post condemned “one of the biggest security failures in the nation’s history.” The U.S. Capitol Police have almost 2,000 officers and a budget larger than that of Detroit and St. Louis. However, fewer than 200 Capitol police “were deployed to interior or exterior posts at the US Capitol” January 6—as if the cops were prepping for the annual visit from the Future Farmers of America.

Nor did the House Select Committee show any interest in the role of federal informants or undercover agents in the Capitol clash. A year ago at a congressional hearing, Sen. Ted Cruz (R-TX) asked senior FBI official Jill Sanborn: “How many FBI agents or confidential informants actively participated in the events of Jan. 6?” She refused to answer.

Two months ago, it was revealed that the FBI had as many as eight informants inside the Proud Boys, a far right group that has been charged with seditious conspiracy for their January 6 violence. Suspicions have also been spurred by Ray Epps, an Arizona activist who urged people to go inside the Capitol building and boasted that he “orchestrated” January 6 has faced no criminal charges. Epps, a darling witness of the House Select Committee, has been accused of being an informant (which he denies). Nor did the Select Committee push to disclose the thousands of hours of videotape from the Capitol’s cameras that could resolve many of the J6 controversies. According to Darren Beatty, the founder of Revolver News, “Without federal involvement, that rally could not have turned into the riot that it did.” But we have not seen the evidence to confirm or rebut Beatty’s conclusion.

The January 6 prosecutions are part of a growing FBI onslaught against dissent. The FBI crackdown is skewed because “Washington is obsessed with threats to Washington itself,” as a senior government official recently told Newsweek’s William Arkin, one of the best investigative journalists in DC. “We’ve become too prone to labeling anything we don’t like as extremism, and then any extremist as a terrorist,” the official observed. The FBI is expanding its targeting of “Anti-Government or Anti-Authority Violent Extremists (AGAAVEs),” groups or individuals the feds claim “intend to commit violence or criminal activity.” And how will the FBI know their intentions? Trust thousands of FBI informants to gin up the evidence to keep propelling the prosecution juggernaut. And every anti-government “extremist” who is indicted can be portrayed by politicians as a co-conspirator with the January 6 traitors.

Biden will continue to invoke January 6 (or July 6, depending on how he is doing that day) to portray himself as the only thing standing between America and utter chaos. But the Biden storyline hinges on keeping Americans blindfolded on many details that occurred at the Capitol before, during, and after that day. Biden’s pitch also hinges on Americans acquiescing to federal agencies and prosecutor vilifying ever more dissenters. Unfortunately, there is no reason to presume that the coverups and the demagoguery will cease working any time soon.