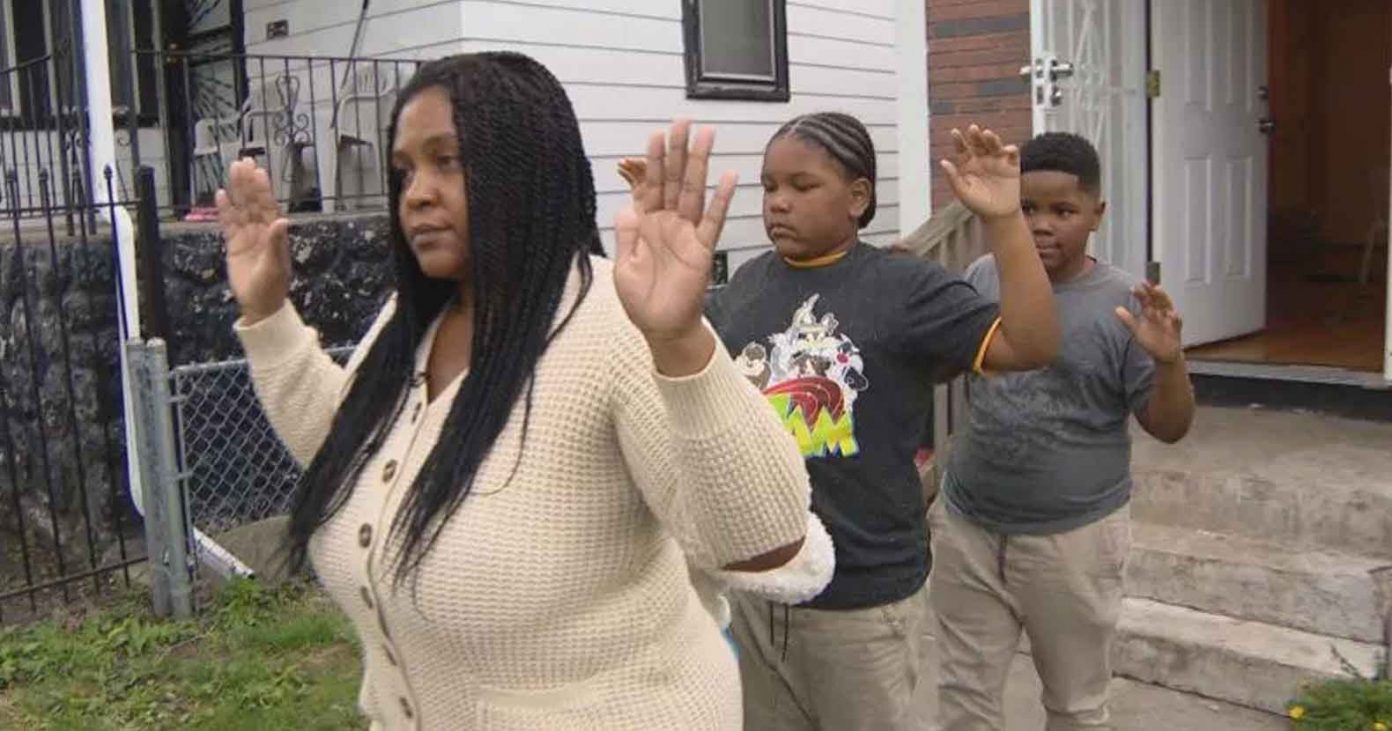 Chicago, IL — In only a matter of months, the city of Chicago is now facing its fifth lawsuit for raiding the homes of innocent people — allegedly by mistake. TFTP has reported on several of these lawsuits in which cops raided a four-year-old’s birthday party and held other children at gunpoint. In the most recent lawsuit stemming from violent police negligence, an innocent family was terrorized, a small child handcuffed, and police used explosives to literally blow holes in their home to search it.

On March 15, Alberta Wilson says Chicago police woke her up, along with her four children as cops forced their way into her home. It was below freezing outside with ice on the ground and despite this fact, the entire family was forced from the home and made to stand in the freezing rain.

Thinking he was a threat, the cops even handcuffed Wilson’s 8-year-old son Royal, who was also forced to stand in the freezing cold.

According to ABC 7, “Wilson and her family were awakened by police at 6 a.m. on March 15, executing a search warrant with information that said an assault rifle that may have belonged to one of Wilson’s older sons was in the home. Police ordered the mother and her family outside. She said they pointed assault weapons at all of them, including her three younger children who are 6, 8 and 9 years old. The adults were handcuffed, and so was Royal, who remained that way in the freezing rain while Wilson begged officers to release him.”

“He was crying and complaining the handcuffs were too tight, he felt like he was about to fall, I had to reassure him God was not going to let anything happen to us,” she said.

Despite claiming there was a weapon in the home, no weapon was found. Also, despite claiming Wilson’s oldest son was in possession of said weapon, no arrests were made. Everyone was innocent and the cops destroyed their home and terrorized the family anyway.

As the family sat outside in handcuffs in the freezing rain, police ransacked their home, tearing mattresses apart, and even using explosive devices to blow holes in their ceiling to look for a non-existent assault rifle.

Not until after a sergeant arrived on scene did any of the cops worry about removing the handcuffs from the tiny child.

“Even after they released him out the handcuffs, they showed no remorse. He’s a baby. Where’s your leadership? ‘Sorry young man. We sorry for placing you in handcuffs, are you ok?’ None of that was shown,” Wilson said.

After cops destroyed the family’s home, they simply left it like it was and didn’t even give them the courtesy of an apology.

As this is happening so often, one attorney in town has begun referring to family’s like Wilson’s as collateral damage in the relentless war cops appear to be waging on innocent people.

“Chicago police officers behave as if our children of color and their trauma is collateral damage in Chicago,” said Al Holfield, Jr., attorney.

And he’s right. As TFTP reported earlier this month, when Samari Broswell, 7, was celebrating her younger brother, TJ Broswell’s 4th birthday earlier this year, she never expected to see 17 heavily armed cops come smashing through her door. However, thanks to a severe case of police incompetence, that is exactly what happened.

Now, just like Wilson’s family, this family is left traumatized while people who claim to ‘protect’ them instead ignore them and continue the same practice. In the Broswell’s case, police claim video from officer-worn body cameras showing the horrifying raid simply went “missing.”

But that is not all.

Just last August, two little boys who used to look up to police were traumatized and their view of police tarnished after a SWAT team burst into their home at night and held the entire family at gunpoint, including the children. The family was innocent and just like the above case, the raid was on the wrong home.

Those two children now suffer from PTSD and have to attend counseling.

It’s not just children either, Chicago cops have raided the wrong homes of elderly women too.

Elizabeth Harrison, 82, used to tell kids to “respect the law.” Then on March 17, 2016, a gang of Chicago cops raided her home, busting down the door and holding her at gunpoint. Because of this trauma, Harrison had to be rushed to the hospital.

The great-grandmother said police must have had the wrong house, but they insisted it was the correct address based on their “intelligence.” No one believed her when she said she was a widow and lived alone. Harrison was made to sit in a chair, overwhelmed with anxiety, while they searched her home for non-existent drugs. The stress was so overwhelming, Harrison was hospitalized.

Despite this history of dangerous terrorism from raiding wrong homes, it appears Chicago cops aren’t trying to get any better at their jobs and remain entirely unapologetic.