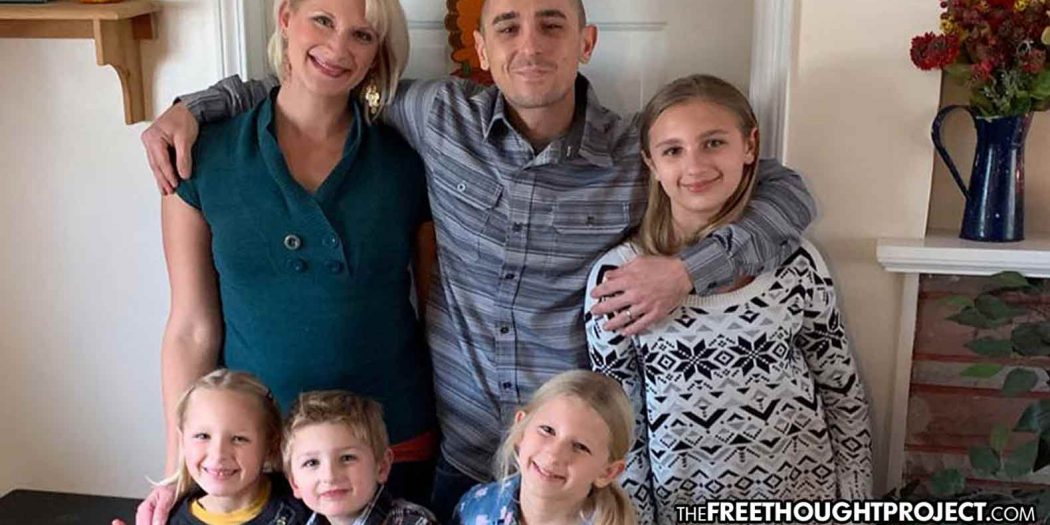 As frequent readers of the Free Thought Project understand, police officers mistake innocent individuals for criminals all the time. Often times, their fear gets the best of them and these folks who have committed no crime and harmed no one, are beaten or arrested only to be exonerated down the road. One man in Idaho Falls, however, will not have a chance to be exonerated because the police who mistook him for a suspect—executed him.

On February 8, 2021, Elias Aurelio Cerdas, a 26-year-old officer who graduated from training less than a year before the shooting, entered the backyard of Joseph “Joe” Johnson, a father of four, mistook him for a criminal, and executed him.

For nearly six month, Cerdas remained on paid vacation without charges but all that changed this week and he has been indicted for manslaughter.

According to East Idaho News, Cerdas was not arrested after being charged but issued a summons for his arraignment at the Bonneville County Courthouse on Aug. 23.

According to police, shortly after midnight early that morning, a Bonneville County Sheriff’s Deputy attempted to make a traffic stop at which point the vehicle came to a stop and the driver of the vehicle fled into a residential neighborhood. The deputy involved in the pursuit told fellow officers they were looking for a man in a black shirt.

During the search, police identified the man and found that he had multiple warrants for his arrest including Felony Battery on an Officer, and two Failure to Appear Warrants with original charges of Resisting/Obstructing Arrest, and Providing False Information to Law Enforcement.

Police claim the suspect, Tanner Shoesmith, 22, had a history of violent altercations with law enforcement which appears to be a cover for the way they acted when they found and then killed Johnson.

According to police, the passenger in the vehicle that was originally pulled over never fled and stayed behind to talk to police. Police claim this passenger had received a message from the suspect, who—while on the run from the cops — took the time to message the passenger and send him his GPS coordinates.

According to police, these GPS coordinates—sent by the suspect who was running from cops, to the passenger he knew was still with the cops—showed him in the backyard of a residence on the corner of Tendoy Drive and Syringa Drive—Johnson’s backyard.

Police then surrounded this house and killed the father of four in his backyard after claiming he had on a black t-shirt and was holding a gun.

“Sometimes everyone does what they think is right and tragedies happen,” the chief said at the time.

After killing the innocent man, a brief investigation revealed that he was not the suspect and, in fact, lived in the home and had committed no crime. Moments later, down the road, a deputy reported seeing a man running and the suspect was located in the back yard of a house, hiding in a shed. The suspect, who police claim has a history of violent interactions with police, was taken into custody without incident.

Since that day, police have failed to release any more information in regard to the shooting.

The Idaho Falls Police Department issued the following statement following news of the indictment, they stopped just short of claiming Cerdas was framed:

“The Idaho Falls Police Department has always and continues to recognize the human tragedy in this incident, especially for the Johnson family. Along with the rest of our community, all of us at IFPD hope and pray for them and wish this had never happened. The Idaho Falls Police Department thanks the Idaho State Police and other law enforcement agencies that conducted the investigation as part of the Critical Incident Task Force. It is a professional, thorough, and unbiased investigation which followed established and proven protocols and procedures and reports the facts. While the Attorney Generals Office’s review of the investigation has been irregular and seemingly arbitrary, we have full faith in the criminal justice system and the great people of Idaho Falls who will ultimately decide the outcome of this case. We will continue to support and participate in this process as all of the facts surrounding this investigation are put before the people of Idaho Falls for review. Until the process is completed, Officer Cerdas will remain with the Idaho Falls Police Department. He will be on limited duties which do not include public contact or the use of police authority.”

If convicted, Cerdas faces a maximum of 10 years in prison though it is incredibly unlikely he will spend any time in jail at all.

In a post on a GoFundMe page set up for Johnson, his wife Bree expressed how devastated the death of their husband and father has left them.

Joe was the sole income earner for our family. He worked hard every day as a mechanic to support our family while I took care of the kids and our home. He was so proud to buy us this house a few years ago and make a nice life for us. Everything he did was for his family. Not only have our lives been destroyed by the unimaginable grief of his life being taken from us, but our safe space and family home was violated in the most traumatic way possible.