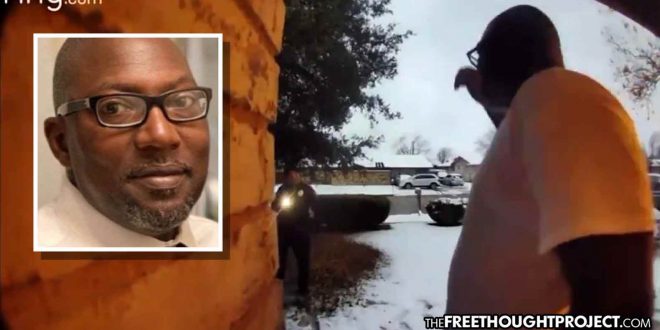 Patrick Warren Sr. was a loving father, husband, and pastor in his community whose life was taken from him on Sunday after his family called police for help. The family asked for a mental health expert, but according to their attorney, one was not available, so a Killeen cop showed up instead. Less than two minutes after showing up, the officer would kill Warren in his own front yard as Warren was unarmed.

The shooting was captured on the family’s Ring doorbell camera as well as cellphone footage and it is causing quite the uproar online.

Lee Merritt, a national civil rights attorney who represents victims of police brutality across the country said that Warren’s family called police to ask for a mental health professional when they noticed changes in Warren’s behavior.

Merritt said the family was told a mental health deputy was not available, so a police officer was sent.

#PatrickWarrenSr was murdered by @KilleenPD. He was on his own property. He was unarmed.

He was suffering a mental health crisis and simply needed help. Instead he was shot three times in his chest and tased.

We demand the immediate arrest of this officer. pic.twitter.com/tNdNBfC5b3

As the video shows, the officer rings the doorbell, then enters the home. Merritt explained that Warren then asked the officer to leave his home, which he does.

After the officer backs up into the yard, Warren walks outside as the officer pulls his taser. Remember, Warren had not committed a crime and his family had only called police for help. Nevertheless, the officer escalates the situation when he could have simply gotten back in his car, walked away, or left.

When the officer tells Warren to get on the ground, Warren refuses and the officer tasers him. Warren then keeps walking as the video changes to a cellphone. Warren’s children and wife are on the porch begging Warren to “sit down” but he does not.

Just as the family asks the officer not to shoot him, the cop fires multiple rounds into the unarmed man — killing him in his own front yard.

According to Merritt, the officer shot Warren once, then pointed the gun at Warren’s wife, telling her to get back. Merritt said the officer then fired his weapon at Warren again.

“The family of Patrick Warren Sr. demands the immediate firing and arrest of the officer responsible for his death,” Merritt said in a press release. “Bell County District Attorney Henry Garza must be prepared to conduct an independent investigation and prosecution of this officer.”

According to the Killeen police department, the officer has been placed on administrative leave — which is standard procedure — as the Texas Rangers investigate.

Warren’s son, Patrick Jr., created a GoFundMe account to pay for his father’s funeral expenses and as of the writing of this article, it has far exceeded its original goal of $20,000, showing the support from the community.

It is entirely possible that this officer will not face charges as Killeen cops are notoriously corrupt. Disturbing video of from Killeen was published in 2017 by the Free Thought Project of a man being murdered in broad daylight. The Free Thought Project reported on this video to help seek justice for Curtis E. Shelley after police refused to arrest his killer.

After two years of doing nothing, the killer — who is the son of a Killeen police officer — found out that he would face no charges for the murder of an unarmed man that was captured on video.