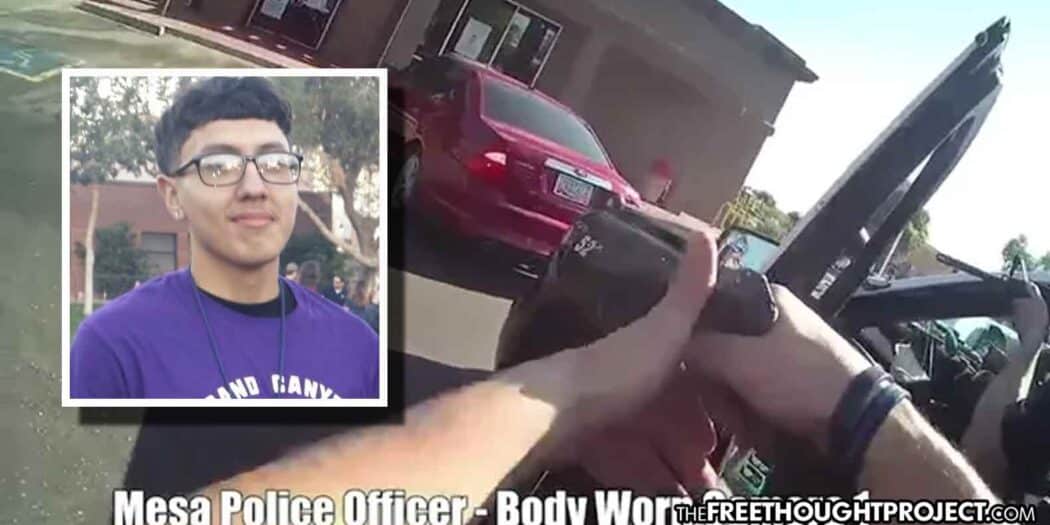 The city of Mesa, Arizona settled a lawsuit with the family of a young man who was killed by police in September of 2020. As TFTP previously reported, Angel Benitez was found asleep in a car which was reported stolen.

Benitez, for whatever reason, drove away from officers and stopped at an apartment complex in Mesa near the cross streets of University and Evergreen. Upon exiting the vehicle, bystanders reported Benitez had his hands raised when cops opened fire, killing the 21-year-old. The City of Mesa recently settled a civil lawsuit with the family for $250,000.

Benjamin Taylor, the attorney representing the family, told reporters, “No amount of money will bring back the life of Angel Benitez…However, we are glad this settlement brings a sense of justice to his family who have suffered tremendously since Angel’s tragic death.”

The settlement comes on the heels of another settlement in 2021, with the City of Mesa, for the unjustified killing of Matthew Shaver. As TFTP reported, Shaver, a contracted exterminator working with Walmart was gunned down inside Mesa’s La Quinta Inn as he was begging for his life, and crawling on his hands and his knees like a submissive puppy dog. The killer cop in Shaver’s case is now former Mesa PD officer Philip “Mitch” Brailsford.

Brailsford was arrested and charged in Shaver’s murder but a jury of his peers found him not guilty. The unfortunate “not guilty” verdict was rendered, even though the body camera footage proved beyond a shadow of a doubt Shaver was unarmed, compliant, and obeying all of the officer’s commands. Brailsford took the opportunity to kill Shaver as the married father of two reached back to pull up his shorts which were falling down. The whole incident was disturbing for many, to say the least, and led to an International outcry amid calls for justice.

Brailsford never had to spend one day behind bars as a convicted killer cop and later went on to retire with full benefits from the police department. In fact, he is eligible to be rehired as a cop almost anywhere in the country. Rumors are he left police work and was working security at a local golf driving range but those cannot be confirmed.

Shaver’s widow and his family combined their lawsuits into one seeking in excess of $75 million dollars. Certainly there are non-disclosure agreements in place which are keeping the families from reporting precisely how much the City of Mesa had to pay out for one more of its rogue cops killing innocent citizens.

Unlike Benitez, Shaver did have a weapon in his room, an air rifle, the same one he used to kill birds, rats and other pests in his work with Walmart stores. But Shaver was nowhere near his rifle when his life was taken from him. A resident at the La Quinta where Shaver was murdered reportedly called police to say there was a man in the hotel with a gun. If that call had not been placed, Shaver would likely still be alive, providing for his family as an exterminator.

Unfortunately, incidents such as Benitez’ and Shaver’s are not uncommon, cross all racial lines, and often end up with grieving families left to pick up the pieces.