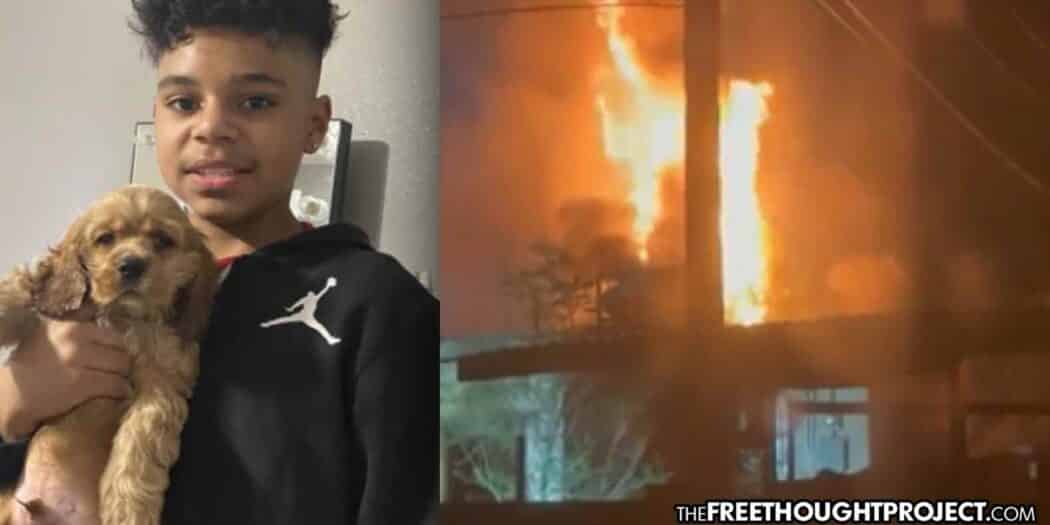 An innocent family is homeless and a 15-year-old boy is dead after a SWAT team engaged in a standoff to arrest a suspect for a parole violation. Police are now conducting damage control to avoid taking the blame.

SWAT team raids house for a robbery suspect. Flashbangs ignite the house, which is then engulfed in flames. After the fire, police find the body of a 14-year-old boy. He was not the suspect. Nor was the family who live in the house.

Last week, police said they were pursuing a suspect, Qiaunt Kelley, for a federal felony warrant for robbery. They later changed their story to say that Kelley was wanted for violation of parole. While on the run, Kelley ran into the home of an innocent family and barricaded himself inside the home, according to police.

A standoff ensued for hours as police demanded Kelley exit the home. As Kelley held up in the home, a 15-year-old boy, identified as Brett Rosenau, also entered the home and police knew he was inside. He was not a suspect and was not wanted but it is unclear as to why he did not exit the home.

The teenager somehow “followed Kelley into the home,” the Albuquerque department said.

At some point during the standoff, smoke began emerging from the windows as half the house became engulfed in flames. As fire-fighters arrived on the scene, Kelley escaped the fire and was taken into custody before being transported to a local hospital to be treated for burn injuries. He is currently in jail.

The boy who was holed up in the home with Kelley was not so lucky. After the fire-fighters extinguished the fire, they found the boy’s body. Officials have not yet released the cause of the boy’s death.

After news of the boy’s death was reported, Albuquerque police quickly took to Twitter to dispel rumors that they shot him. However, they admitted that their actions could have ignited the fire.

“There is false information being spread on social media about the overnight SWAT incident. No officers fired their weapons. Arson investigators are trying to determine the cause of the fire. Both individuals were given opportunities to safely exit the house,” the department tweeted.

Adding that “We disclosed the devices used to get the occupants to exit the home. We have used them hundreds of times w/out incident. We acknowledge the possibility that one of these devices may have contributed to the fire. AFR’s arson investigation will determine the cause of the fire.”

We disclosed the devices used to get the occupants to exit the home. We have used them hundreds of times w/out incident. We acknowledge the possibility that one of these devices may have contributed to the fire. AFR’s arson investigation will determine the cause of the fire.

Residents of the home told KOB4 that the flashbangs were the cause of the fire.

The City of Albuquerque confirmed the use of flashbangs and released a statement noting that “A drone and robots were used to determine who was inside the house and to activate powder irritants inside the home to get the individuals to exit. At one point, a man believed to be Kelley, opened the back door of the home and lay on his back as officers monitored his actions. He ignored officers’ commands to stand up. He eventually sat in place. Officers used a noise flash diversionary device to get Kelley to follow commands. But he retreated back into the home, shutting the door.”

After seeing police fire flashbangs as Kelley tried to exit the house, perhaps the child became too scared to leave and died as a result. We will never know. However, the fact that no one was armed and police knew there was a child inside makes this a severe case of overkill and regardless of who is ultimately at fault, the police certainly played a role in Brett Rosenau’s death.

“This is one of the most egregious situations of state violence, and that is saying a lot for someone who has been on this work for decades,” Selinda Guerrero, New Mexico field organizer for the nonprofit Forward Together told local media. Indeed.

Because the Albuquerque department is under a federal consent decree agreed upon in 2014 after the U.S. government determined it had a pattern of excessive force, results of all the investigations into the standoff have to be reported to its federal independent monitor, and an independent investigation is underway.