Gun Control, By the Numbers

Gun Control, By the Numbers 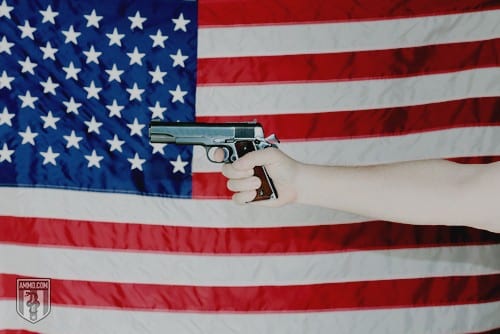 For many decades, people have been pushing for gun control as a way to decrease crime. The main purpose of a gun, after all, is to kill and injure people. Therefore, if fewer people have guns, then less crime will occur, as the common logic goes. However, as with most things, the reality of the situation is often more complicated and contradictory to what one might believe at first glance.

In reality, gun control has little impact on the actual number of homicides. The following graph shows the murder rate of various U.S. states on the vertical axis and the percentage of gun control regulations they adopted on the horizontal axis: 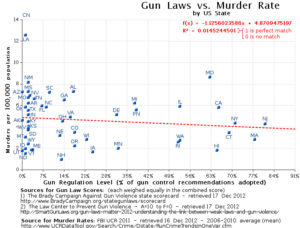 If gun control was as blatantly effective as many would suggest, this graph should show it. However, as one can see, there is no substantial correlation between the two factors. A similar lack of correlation is seen between all violent crime and gun control: 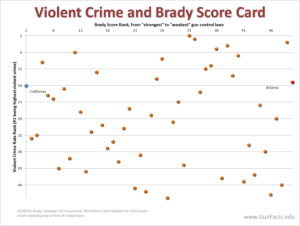 While one could argue that states with higher murder rates are more likely to pass gun control laws, which would explain this lack of correlation, this is not what ends up being seen either. If this were true, one would expect homicide rates to decrease whenever gun control laws are passed. Here is a chart of homicide rates for Australia, often touted by leftists as a model for gun control, given their extreme gun seizure program following the Port Arthur shooting of 1996: 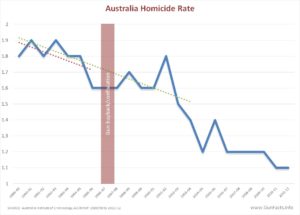 As you can see, the homicide rate continued its overall rate of decline, even after the gun buyback was enacted. A similar lack of change is seen in other places where gun control laws are passed.

Given this data, it should be obvious that gun control laws do not work. At the same time, the majority of Americans should want little to no gun control. However, there is quite a bit of confusion among the American public over the ways in which the effectiveness of gun control laws should be measured.

A very common source of confusion is conflating all homicide deaths with gun homicide deaths. Data suggests that gun control laws actually do have an impact on gun homicide rates. However, as has already been demonstrated, these laws do not have any effect on total homicide rates. As anyone who has every taken an economics class will know, substitutes are alternative goods and services which can be used to accomplish the same task. Clearly, if fewer people have guns, then fewer crimes will be committed with them. However, if someone who would have killed with a gun does so with a knife instead, then nothing has really been accomplished. Furthermore, over 95% of murders are committed by someone who only kills one person. Given that it is not substantially harder to kill someone with a knife than it is with a gun, one can essentially conclude a priori that at least 90% of the murders which currently occur would still happen, even if hardly any civilians possessed guns.

Furthermore, a decrease in possession of guns would also lead to less deterrence of crime among the general public. A gun, given its range and ability to kill quickly, is a much more effective tool for the deterrence and prevention of crime than a knife, pepper spray, or other weapon is. Guns are used in self-defense over two million times a year in America alone, with the defender never having to fire their weapon in the substantial majority of these instances. Furthermore, while most murder victims are unarmed when they are killed, almost all murderers commit their crime using a weapon. Thus, while limiting access to guns won’t substantially reduce murder rates, they will substantially affect the ability of people to defend themselves against murderers who have weapons when they do not.

Mass shootings are another example of crimes which gun controllers use to justify their agenda. As with gun deaths, gun control actually does have some impact on the number of mass shooting deaths which occur. Again though, this is an inaccurate way of evaluating the effectiveness of gun control laws. Firstly, mass shootings make up less than 1% of annual homicides in the United States, despite getting disproportionate media attention. Secondly, if someone who would have committed a mass shooting instead perpetrates a bombing or becomes a serial killer as a result of lack of access to guns, then again, nothing has been accomplished. Furthermore, a substantial percentage of firearms used in self-defense are semi-automatic weapons, seeing as how these weapons currently make up about 25% of civilian-owned guns in America. Thus, implementing even “common sense” gun control laws, such as bans on “assault weapons” and universal background checks will not reduce total homicide rates, as they will decrease the ability of the public to defend themselves against non-mass murderers.

Private gun ownership provides countless benefits to the civilian population of any country. Besides the aforementioned personal self-defense benefits, over 300,000 jobs in the United States exist because of the private gun industry. Furthermore, private gun ownership provides a deterrent to governments becoming tyrannical, as an armed populace is harder to oppress. Lastly, high rates of gun ownership allow for militias to be easily formed in the event of a foreign invasion, thus providing national security benefits. All of this is harmed or eliminated by the implementation of ineffective and useless gun control laws, which is why it should be as easy to buy a firearm as possible.

Starté Butone is a libertarian writer and contributor to Antiwar.com.