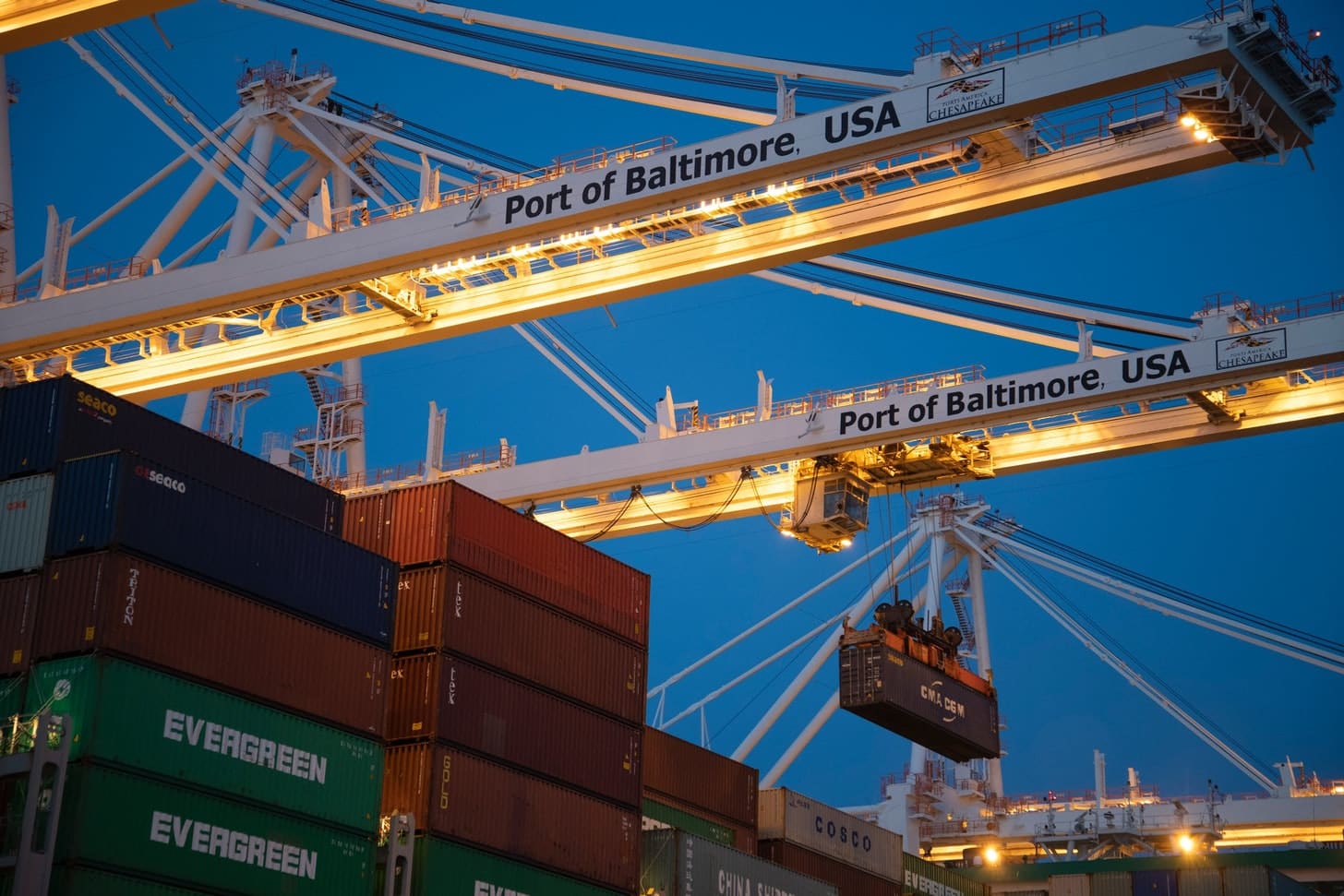 There’s a 101-year-old law most Americans have never heard of, one that shaves tens of billions of dollars out of the U.S. economy every year for the narrow benefit of politically-influential shipbuilders, shipyard unions and shipping lines.

The Jones Act does that by essentially barring foreign vessels from transporting freight or people between two U.S. ports. Among many other ill effects, the elimination of competition drives shipping prices far above what a free market would dictate.

Only 46 countries have such laws, and, according to the World Economic Forum, the United States imposes the most stringent ones of all. The Jones Act not only requires that commercial vessels traveling between American coastal ports or along inland waterways be American-flagged, but also American-owned, American-built, American-maintained, American-repaired and American-crewed.

In addition to covering transport from, say, Baltimore to Houston or river transport from New Orleans to St. Louis, the Jones Act even applies its anticompetitive muscle to non-contiguous parts of the country such as Alaska, Hawaii, Puerto Rico and Guam.

A bow-to-stern assessment of the Jones Act’s impact will lead rational observers across the political spectrum to conclude it should have been torpedoed long ago.

National security is a claimed rationale for many a destructive policy, and that’s the case with the Jones Act as well. In the words of one of its defenders, the Jones Act is “crucial (for) the U.S. to maintain an independent shipbuilding and marine cargo capability to serve our nation in wartime.”

If the Jones Act is supposed to guarantee the country can tap a vast U.S. merchant marine fleet during major wars, it’s been a spectacular failure: Between 1960 and 2016 alone, the number of private, U.S.-flagged, oceangoing ships plummeted from 2,926 to just 169.

Officially titled the Merchant Marine Act of 1920, the Jones Act was enacted just after World War I, and the reasoning espoused by its defenders is correspondingly out of step with modern warfare and logistics.

Long gone are the days when soldiers piled into troopships for voyages across the sea. In today’s conflicts, they and much of their heavy equipment are whisked to foreign theaters on cargo jets.

That’s not to say ships are irrelevant to large-scale military deployments. However, in practice, the Pentagon places limited reliance on U.S. commercial ships. For Operations Desert Shield and Desert Storm, 26.6% of equipment was delivered by foreign-flagged ships and only 12.7% by U.S.-flagged commercial vessels. Notably, only one of them was a Jones Act-compliant craft.

The protectionist shelter provided by the Jones Act has undermined the competitiveness of the U.S. shipbuilding industry by shielding it from market forces that would otherwise guide it to developing specialized expertise.

“Rather than specializing in the production of one, two, or several types of ships and purchasing other vessels from foreigner builders more adept at their production…U.S. shipbuilders complacently settle for mediocrity across a range of commercial ship classes,” wrote Colin Grabow, Inu Manak and Daniel J. Ikenson in a 2018 Cato Institute study.

High-cost mediocrity positions the U.S. shipbuilding industry to cater only to the domestic market forcibly made its captive by the Jones Act—little surprise, then, that exports only account for about 5% of the industry’s revenue.

The Jones Act is supposed to ensure a thriving American shipbuilding industry, yet the industry has withered. While Japan has more than 1,000 shipyards, there are now only around 124 of them left in the United States, just 22 of which are capable of building ocean-going cargo ships and other substantial vessels.

Meanwhile, there’s reason to question the premise that it’s risky for intra-country shipping to benefit from the efficiency and prowess of foreign shipbuilders—who could theoretically turn their backs during future hostilities.

When the Jones Act was enacted in 1920, shipbuilding was heavily concentrated in Europe. Today, however, the world’s top eight shipbuilding countries are South Korea, China, Japan, the Philippines, Taiwan, Romania, Vietnam and Germany. That’s a globally-diversified list dominated by treaty allies and countries with whom relations are friendly—to say nothing of the fact that trade helps discourage conflicts.

Artificially Raising the Cost of Shipping

Thanks to the requirement that Jones Act vessels be American-made using American steel, the ships used in domestic transport are far more expensive than they should be. According to a 2017 Congressional Research Service study, U.S.-built coastal ships cost $190 to $250 million—compared to just $30 million for a similar ship built abroad.

The higher cost of building, maintaining, repairing and manning Jones Act ships makes the cost of operating such a vessel more than double what it takes to sail a foreign ship.

Higher prices for waterborne transport between U.S. ports is just the beginning of the Jones Act’s effect on America—by their nature, shipping prices have a powerful ripple effect on the cost of a vast range of raw materials and finished consumer products across the U.S. economy.

The Jones Act is especially harsh for American island territories: After all, Hawaii, Guam and Puerto Rico can’t consider alternatives like rails and roads. According to a report commissioned by the Puerto Rico Chamber of Commerce, the cost of importing goods from U.S. ports was 151% higher than from non-U.S. ports.

It’s worth emphasizing that Puerto Rico has a 44% poverty rate, and every dollar Puerto Ricans waste on artificially high shipping prices is a dollar that can’t be put to use for something else that’s dearly needed.

Thanks to the high replacement cost of Jones Act-compliant ships, domestic maritime operators put off buying new vessels longer than they should.

Sixty-five percent of Jones Act container ships are more than 30 years old—11 years older than comparable ships in the fleets of other developed countries. Lacking the benefits of recent design and construction innovations, these vessels are necessarily less fuel-efficient and more accident-prone.

Meanwhile, higher prices for water-borne shipping pushes businesses to alternatives. The impact is apparent: In the United States, just 2% of freight travels by sea, compared to 40% within the European Union.

Sea freight is easily the most carbon-efficient mode of shipping. Given that, when the Jones Act pushes businesses to substitute trucks, railways or aircraft, that exacts a needless toll on the environment. Pound for pound and mile for mile, a truck emits 3.8 to 6 times as much carbon dioxide as a sea freighter.

The substitutions create other costs to society, including heavier road traffic and greater wear and tear on bridges and highways. While trucks represent just 10% of miles traveled in America, they drive over 75% of road maintenance needs.

Higher costs and ecological impacts aren’t the only poison fruit of the Jones Act: By limiting the number of available vessels, the Jones Act also distorts also the decisions of market actors to the detriment of American buyers and sellers alike.

For example, given a paucity of Jones Act-compliant vessels that can transport liquefied natural gas (LNG), Massachusetts is compelled to import much of its required LNG from Russia, despite America’s status as the world’s third-largest producer of that commodity.

A Failure in Times of Crisis

The Jones Act is said to better position the United States to persevere through natural disasters and other crises, but time and again, crises demonstrate the law has the opposite effect. With too few Jones Act-compliant vessels to meet sudden, urgent needs, the government is repeatedly compelled to issue waivers that allow foreign-flagged vessels to bring supplies to disaster areas.

For example, waivers were issued in the wake of Hurricane Katrina’s devastation of the Gulf Coast—over the callously self-serving objections of Jones Act-protected shippers, shipbuilders and unions, and Republican and Democratic legislators doing their bidding.

Waivers were also issued after Hurricanes Rita, Sandy, Irma and Maria, and earlier this year when the Colonial Pipeline shutdown created fuel shortages in the eastern part of the country.

According to a comprehensive 2018 Cato Institute study, “Accounting for the actual inflated costs of transportation and infrastructure, the forgone wages and output, the lost domestic and foreign business revenue, and the monetized environmental toll puts the annual cost of the Jones Act in the tens of billions of dollars.”

Cato is not alone; others have also concluded the Jones Act is a net negative for the American economy, including the U.S. International Trade Commission, the Federal Reserve Bank of New York, the Mercatus Center at George Mason University and various economists and researchers.

Other countries have realized the benefit of easing similar restrictions: After New Zealand did so in 1994, it saw rates for coastal shipping fall by 20 to 25% over the next six years.

Despite the overwhelming case against the Jones Act, it has now commenced its second century of harming U.S. producers and consumers for the benefit of certain shipbuilders, shipyard employees and domestic maritime operators.

Short of total repeal, much good could be accomplished by easing any of the Jones Act’s restrictions. For example, Congress could exempt Puerto Rico, Alaska and other non-contiguous territories, or end the requirement to use ships built in the United States.

In a stark demonstration of “the tyranny of the status quo,” neither has attracted even a single cosponsor.