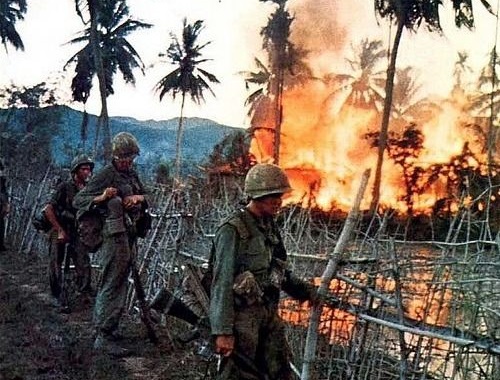 “I think that when Americans talk about the Vietnam War … we tend to talk only about ourselves. But if we really want to understand it … or try to answer the fundamental question, ‘What happened?’ You’ve got to triangulate,” says filmmaker Ken Burns of his celebrated PBS documentary series “The Vietnam War.” “You’ve got to know what’s going on. And we have many battles in which you’ve got South Vietnamese soldiers and American advisors or … their counterparts and Vietcong or North Vietnamese. You have to get in there and understand what they’re thinking.”

Burns and his co-director Lynn Novick spent 10 years on “The Vietnam War,” assisted by their producer Sarah Botstein, writer Geoffrey Ward, 24 advisors, and others. They assembled 25,000 photographs, feature close to 80 interviews of Americans and Vietnamese, and spent $30 million on the project. The resulting 18-hour series is a marvel of storytelling, something in which Burns and Novick take obvious pride. “The Vietnam War” provides lots of great vintage film footage, stunning photos, a solid Age of Aquarius soundtrack, and plenty of striking soundbites. Maybe this is what Burns means by triangulation. The series seems expertly crafted to appeal to the widest possible American audience. But as far as telling us “what happened,” I don’t see much evidence of that.

War is not combat, though combat is a part of war. Combatants are not the main participants in modern war. Modern war affects civilians far more and far longer than combatants. Most American soldiers and Marines spent 12 or 13 months, respectively, serving in Vietnam. Vietnamese from what was once South Vietnam, in provinces like Quang Nam, Quang Ngai, Binh Dinh, as well as those of the Mekong Delta – rural population centers that were also hotbeds of the revolution — lived the war week after week, month after month, year after year, from one decade into the next. Burns and Novick seem to have mostly missed these people, missed their stories, and, consequently, missed the dark heart of the conflict.

To deprive their Vietnamese enemies of food, recruits, intelligence, and other support, American command policy turned large swathes of those provinces into “free fire zones,” subject to intense bombing and artillery shelling, that was expressly designed to “generate” refugees, driving people from their homes in the name of “pacification.” Houses were set ablaze, whole villages were bulldozed, and people were forced into squalid refugee camps and filthy urban slums short of water, food, and shelter.

Read more at The Intercept.