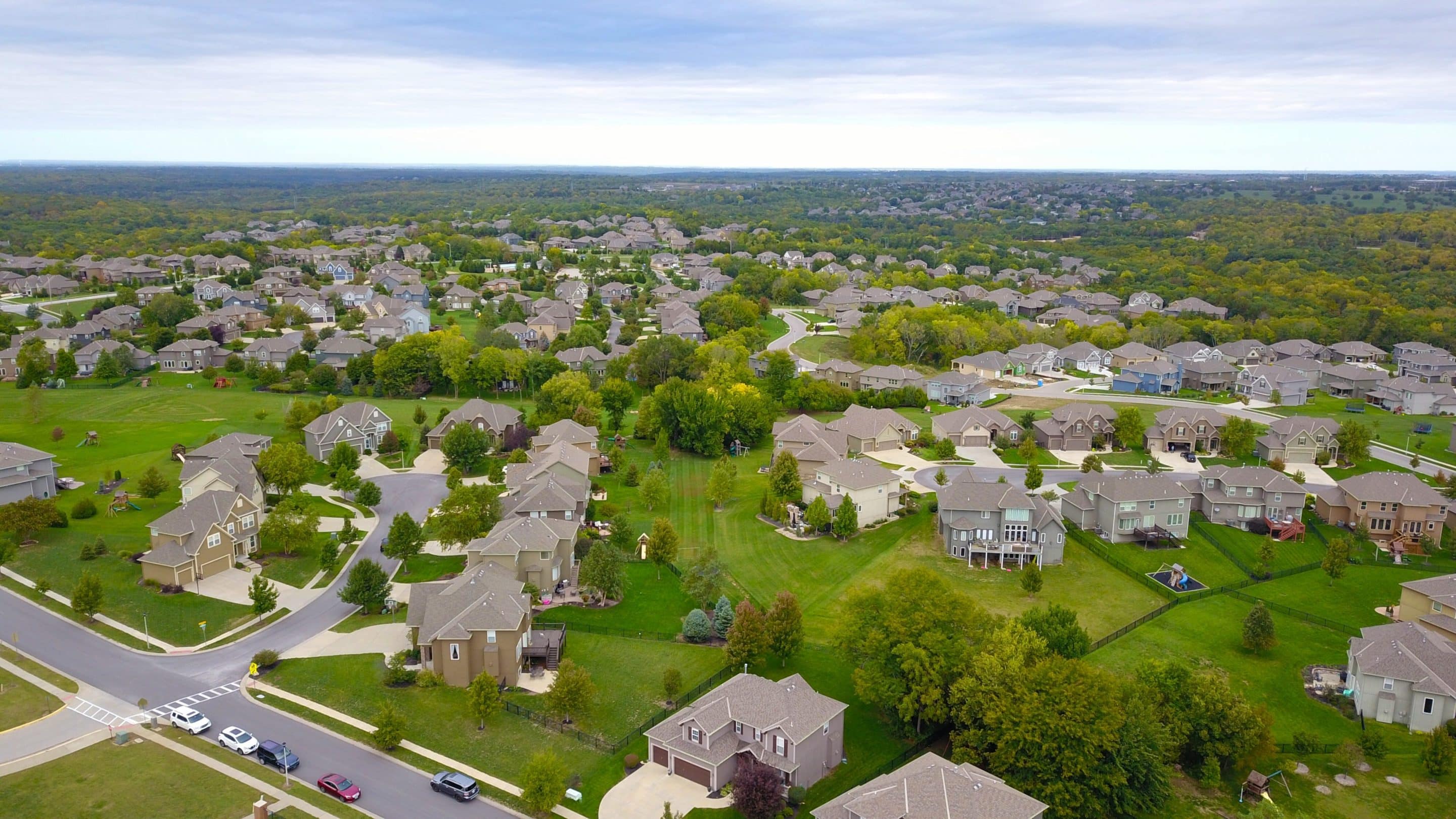 The crash landing of the housing market continued in November. Existing home sales of just 4.09 million units at an annualized rate represented at staggering 37% drop from the 6.49 million rate posted in January. There has never been a drop this severe within a single calendar year in the history of the series.

Needless to say, existing home sales are not merely a secondary economic indicator. To the contrary, they arise from ground zero of household economics. That is to say, the doubling of mortgage rates to nearly 7%, the soaring inflationary bite out of paychecks and the growing public recognition that a doozy of a recession is just around the corner have taken their toll. Big time.

Accordingly, the folks on main street are no longer frantically chasing housing purchases and soaring prices. Instead, they are hunkering down for the economic storm ahead, even if the reckless gamblers on Wall Street still don’t get the picture. Today’s existing housing report, in fact, was about a close to warning bell that the party’s over as you can get.

But the stock market is being run by chart monkeys who assume the Fed will never let the averages correct and stay that way, and that chasing moving averages on the stock charts is a splendid way to make easy money.

Actually, today’s existing home sales report showed that this core indicator has plummeted to nearly the 2008-2010 housing bottom. So the question recurs. Is now a good time to be chasing stocks?

We’d say, only at your peril! 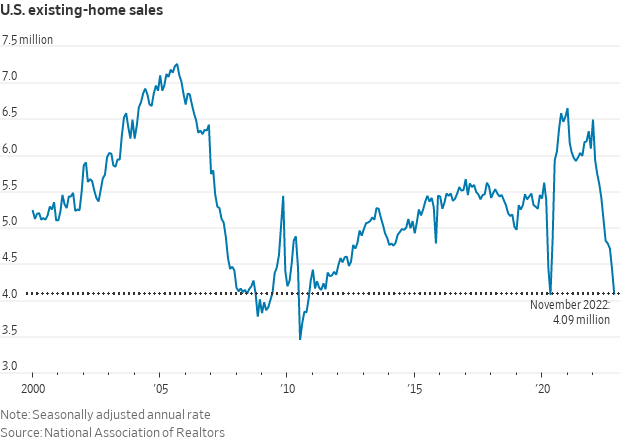 Within the internals of today’s report there was another, perhaps even more important, straw in the wind. The most speculative precinct of the housing market—residences priced above $1.0 million—has taken it on the chin the hardest. Whereas overall existing home sales were down 35% from last November, activity in the priciest end of the market was lower by more than 41%.

The significance of that should not be minimized. What has passed for prosperity since the Great Recession has been heavily dependent on the bubble-based spending spree of the top 20% of households. But with inflation hitting pocketbooks at all levels and financial asset values having peaked months ago, even the wealthiest portion of the public is beginning to pull in its horns.

As it happens, the top tier of spenders is exactly whom the Fed is targeting. Alan Greenspan famously targeted the “wealth effect” in the 1990s on the misguided theory that if people felt richer they would spend more, causing a virtuous Keynesian cycle of rising spending, production, incomes and still more spending. And then rinse and repeat again.

We’d venture now to say, however, that what lies ahead is a reverse wealth effect. As the Great Money Bubble deflates, the most prosperous segment of households will be hit the hardest by falling financial asset prices. And they will respond to these drastically changed circumstances by spending, speculating and investing less than before.

That is to say, there never was a true, sustainable “wealth effect.” So now the Fed is being forced to put the kibosh on its own errant theory. 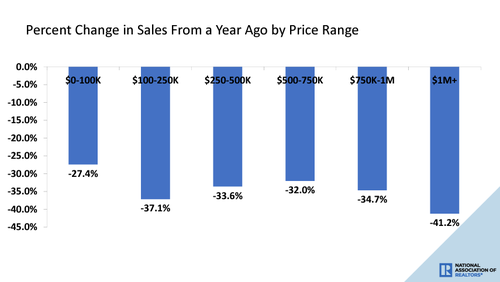 Indeed, the Fed’s own data on household wealth provide the smoking gun. Since it got into the money-printing business big time after the dotcom bust, the net worth of the top 1% of households has soared from $11.4 trillion (2000) to $45.6 trillion (2021). That’s a staggering gain of $34.2 trillion and reflects nearly a 7% per annum growth rate during a 21-year period when the nominal GDP rose by only 4.1% per annum.

By contrast, the net worth of the bottom 50% of households barely doubled from $1.4 trillion to $3.8 trillion. The resulting gain of $2.4 trillion was just 7% of the windfall which accrued to the top 1%.

So let’s go back to the basics. To bring inflation to heel, the Fed will need to push interest rates high enough to generate strongly positive real rates, as Volcker did back in the early 1980s. But meaningful real rates on the 10-Year UST in the context of a sticky inflation rate of 5-6% or better would compute to a nominal yield of 8% or higher.

It goes without saying that 8% on the benchmark UST would bring the Wall Street house of cards tumbling down. Stocks, bonds, real estate, Tech, and cyptos alike would plunge from today’s levels.

So, yes, there is a reverse wealth effect coming down the pike. The chart below should remove all doubt. In the meantime, the politicians of Washington are doing their level best to make the mess caused by the Fed just that much worse. That is, just as the Fed is being forced to push interest rates sharply higher, these cats are launching a new “spend and borrow” spree.

As we will elaborate further in Part 2, the powers that be unveiled in the dead of night Tuesday a $1.7 trillion appropriations bill for fiscal year 2023. This so-called bipartisan measure contains $858 billion in military spending, which is up by 10% or $76 billion from the already bloated levels of FY 2022; and also $773 billion in nondefense discretionary spending, which represents a $43 billion rise from the pork-barrel stuffed levels of last year.

There is also an additional $45 billion to support Washington’s godforsaken proxy war on Russia in Ukraine. That brings the total to more than $100 billion in behalf of a mindless neocon adventure that has no bearing whatsoever on homeland security, and which is so badly dislocating global energy and food markets as to push main street inflation to the highest levels in 40-years.

As we will further elaborate, this 4,155 page so-called “Omnibus” bill represents pure betrayal by the Senate GOP RINOs (Republicans in Name Only). Led by the despicable pol who has spent 54 years on the public teat, Mitch McConnell, they have neutered and undermined the incoming GOP House majority by ceding the upcoming budget to Democrats.

Indeed, agreeing to a FY 2023 spending bill in a lame duck session is unprecedented when one chamber is about to change control. This speaks volumes about the treacherous McConnell, as well as the interest rate disaster which lies ahead.

This article was originally featured at David Stockman’s Contra Corner and is republished with permission.

David Stockman was a two-term Congressman from Michigan. He was also the Director of the Office of Management and Budget under President Ronald Reagan. After leaving the White House, Stockman had a 20-year career on Wall Street. He’s the author of three books, The Triumph of Politics: Why the Reagan Revolution Failed, The Great Deformation: The Corruption of Capitalism in America and TRUMPED! A Nation on the Brink of Ruin… And How to Bring It Back. He also is founder of David Stockman’s Contra Corner and David Stockman’s Bubble Finance Trader.