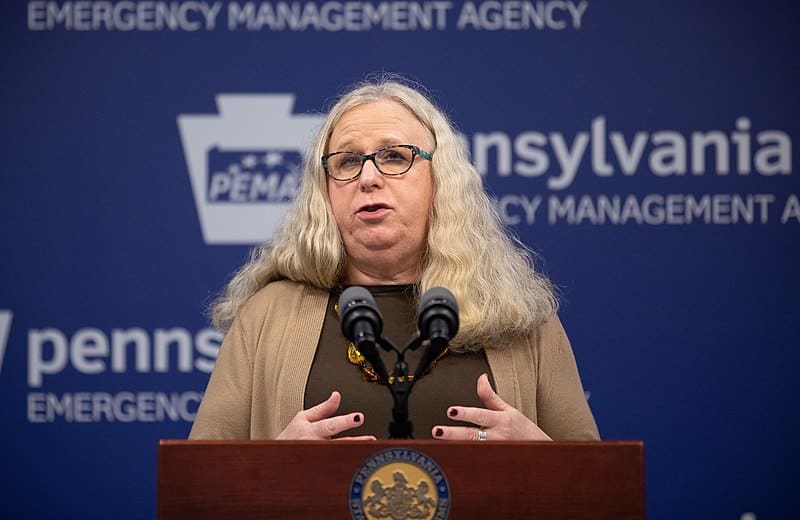 On January 19 it was announced that Joe Biden planned to nominate Rachel Levine, the Pennsylvania (PA) secretary of health, for the position of assistant secretary of health in the Department of Health and Human Services. This is potentially good news for Pennsylvanians, who will finally be rid of her after having had to endure her disastrous covid lockdowns and restrictions for nearly a year, but is likely bad news for the rest of the country.

News coverage of Levine’s nomination is focused almost entirely on the fact that if she is confirmed she will be the first transgender official to be confirmed by the Senate and barely mentions or completely glosses over her handling of the pandemic in PA. NPR doesn’t mention her track record at all other than noting that she, unsurprisingly, called for more federal funding to deal with the virus. The Morning Call at least reported that Levine has faced criticism over her handling of the virus response but failed to mention that under Levine PA nursing homes were forced to accept covid-positive patients.

After the announcement of her forthcoming nomination, Republicans began to attack Levine on social media, especially concerning her nursing home policy. In response, Newsweek published a laughable excuse of a “fact check,” asserting, “There is no evidence to support Greene’s [a Republican representative from Georgia] claim that Levine placed coronavirus-positive patients in nursing home facilities, thus likely contributing ‘to the thousands of elderly deaths in Pennsylvania.’”

However, the author, Julia Marnin, seems to have failed to adequately research PA Department of Health guidelines. She cites a guideline issued in March of 2020 that states that nursing homes “must continue to accept new admissions and receive readmissions for current residents who have been discharged from the hospital who are stable,” and that “This may include stable patients who have had the COVID-19 virus.” Marnin then argues that this language didn’t mean that nursing homes had to accept positive patients but that “they can” and that there is no evidence that Levine’s policy “placed coronavirus-positive patients in nursing homes or contributed to thousands of elderly deaths in the state.”

This absurd claim completely falls apart, since later Pennsylvania Health Department guidelines make it explicitly clear that nursing homes must readmit covid-positive patients and continue to accept new ones even if they are covid positive, as well. Guidance issued on May 12, 2020, states that “A positive test result is not a reason to refuse readmission to a resident” and that “An NCF [nursing care facility] must continue to take new admissions, if appropriate beds are available, and a suspected or confirmed positive for COVID-19 is not a reason to deny admission.”

Until the late fall/early winter surge in cases and deaths, roughly 70 percent of all covid fatalities in Pennsylvania were among nursing home and long-term care facility patients. Since the latest surge, that number has dropped to roughly 50 percent. Yet, even with the latest drop, it is clear that the state government’s nursing home policy has been a disaster, and the media does a great disservice to the country by sweeping a discussion of that record under the rug.

Perhaps even more disturbing than forcing nursing homes to accept covid-positive patients is Levine’s policy goal of social justice–based rationing of covid treatments that was released by the PA Department of Health under Levine’s leadership.

As I have written about previously, this guidance, entitled “Ethical Allocation Framework for Emerging Treatments of COVID-19,” states that “a core goal of public health is to redress inequities that make health and safety less accessible to disadvantaged groups—we show equal respect for all members of society by mitigating the structural inequities that cause certain communities to bear the greatest burden during the pandemic.” In other words, according to Levine’s department of health, public health isn’t just about medical health issues, it is about using the response to medical health issues to engineer society to promote “social justice.”

In this scheme, the state recommends that healthcare providers use a weighted lottery system to ration care and encourages hospitals to weigh a patient’s entry based on his or her socioeconomic status as determined by old data aggregated from census blocks. You would think that promoting “equality” would mean that whether you receive life-saving medical treatment wouldn’t depend on where you live, but some patients are apparently more equal than others.

The fact that someone who apparently subscribes to such a radical egalitarian agenda is likely to soon be one of the most powerful healthcare bureaucrats in the country does not bode well, as calls for the federal government to nationalize healthcare continue unabated. Levine’s radicalism, combined with the incompetence she displayed by forcing nursing homes to accept covid-positive patients and other heavy-handed lockdown measures, will hopefully at least lead to a serious analysis of her record during her Senate confirmation hearing. But don’t hold your breath.