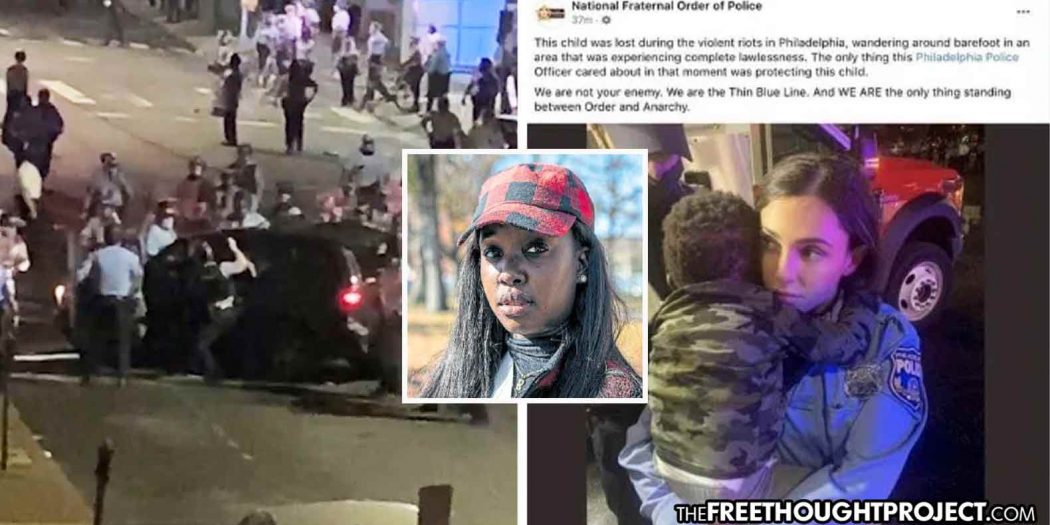 As the Free Thought Project reported last October, the police shooting death of Walter Wallace Jr., a Philly man in a mental health crisis who charged officers with a knife, set off massive unrest in the city. On the first night of unrest, TFTP reported on multiple instances of police officers being attacked and actually retreating from rioters. On the second night, however, the cops appeared to be the ones rioting and an innocent mother and her toddler were caught in the middle of their violence.

In a video posted to Twitter, dozens of riot officers are seen swarming an SUV. For an unknown reason, they begin smashing in all the windows on all sides with a complete lack of concern for anyone inside.

It is a scene reminiscent of the Rodney King beating but worse, as there was a child involved. This week, the taxpayers of Philadelphia were put on notice they will be paying Young $2 million because of what the cops did to her that night.

On that fateful night, Young—who didn’t even know their were protests going on—turned down a blocked off street and was attempting to turn around when a massive gang of cops swarmed her car and began attacking her. Young and her 16-year-old nephew were dragged from the car for no reason and then savagely beaten. Young’s 2-year-old was asleep in his car seat in the back and was shaken out of his slumber by the sound of breaking glass.

The attack was captured on video by April Rice and it quickly went viral as Young and her nephew were left battered and bloody for no reason.

“Her face was bloodied and she looked like she had been beaten by a bunch of people on the street,” attorney Riley H. Ross III told The Washington Post.

After kidnapping Young, police then kidnapped her son and shamelessly used him for a fake PR story on social media. A picture of a female cop holding Young’s son was later posted on the National Fraternal Order of Police Facebook page, along with claims that officers found Young’s son “lost” and “wandering around barefoot” before asserting that officers are “the only thing standing between order and anarchy.”

This was all a lie.

“It’s propaganda,” Ross III told The Post at the time. “Using this kid in a way to say, ‘This kid was in danger and the police were only there to save him,’ when the police actually caused the danger. That little boy is terrified because of what the police did.”

1/ This post by @GLFOP is a lie. My firm @MinceyFitzRoss represents this boy and his mother. This photo was taken moments after police attacked their vehicle, busted out the windows, ripped the mother from her car and assaulted her. pic.twitter.com/6dmDfoBe2B

Young was separated from her son for hours until the boy’s grandmother finally found him in a police cruiser miles away in Center City, with broken glass in his car seat, according to attorneys.

This is not a scene that should represent the supposed land of the free. This is a scene out of a war torn hell state.

The fact that officers felt comfortable enough to walk up to the vehicle and begin smashing out windows, indicates that they did not feel threatened from an armed occupant or a potential for being run over — nor were they worried about accountability. In other words, this massive gang of riot police carried out an act of violent aggression on a family trapped in the chaos and faced almost no consequences.

Though two officers were fired over the attack, and another 15 await internal disciplinary proceedings, not a single cop has been charged with a crime.

“The video to me is clear that more than two officers that were fired participated in the physical assault,” one of Young’s attorneys Kevin Mincey said. “I can’t understand how those people would be allowed to continue to wear the uniform of the Philadelphia Police Department.”