Libertarians, Liberty-wing Republicans, and other opponents of non-defensive wars are popularly misconceived to have an “every man for himself” approach to both our economic views and foreign policy positions. Of course, this is patently false in both cases, but this piece will focus on clarifying the latter. Local Libertarian activist Roy Minet, who has also written about the former, touched on the popular myth of isolationism in his 2014 LNP article “Defense should mean defense only.” “Apparently, they call anyone who doesn’t support their various military interventions around the globe an isolationist.” I made this same point in my 2017 piece for The American Conservative, “Whither the Anti-War Movement,” about how the label helped kill Ron Paul’s 2008 and 2012 Presidential campaigns. This conflation of non-interventionism with “isolationism” continues to squelch and distort the message of antiwar voices…which is particularly relevant given the current events in Ukraine.

The Libertarian National Committee recently sent out a mailer titled “No War with Russia.” It warns of the danger of entangling alliances and lays out a brief history of Russia and the U.S.’s precarious relationship, and the role NATO has played in it. The prescription is non-interventionism, because “when all you have is a hammer, everything looks like a nail.” A recent article that appeared in The Lancaster Patriot, “The Virtue of Neutrality:  Resist the Urge to Take Sides” (originally from Mises Institute) further explains how the state, along with its media allies, exhibits a pattern of concocting crises to perpetuate the power of this hammer. “What defines our present condition is how the moral panics are used to rally a civilian army that revels in the demise of the nonconforming opposition…The Russia-Ukraine War is an easy lightning rod that the government and established centers of power in society can use to demonize Americans who hold the wrong view.” This “wrong view” is often merely the act of expressing more nuance and context about the situation, than what is found in mainstream legacy media. “The answer for why Americans pine for more war is probably complicated, but it’s clear that they generally hold simplistic views of the situation over there.”

Perhaps it is people’s resignation that the history and context of the conflict are too complicated to grasp that leads them to accept the simplistic narrative they are fed. Consequently, popular signaling of virtue seems to be centered around criticism of Putin and the notion of conceding nothing to him (even if at the expense of Ukrainians themselves). But non-interventionism takes the sensible position that Putin is not our leader, and thus can’t be held accountable by Americans for bad behavior. Conversely, if we at least acknowledge NATO’s role in provoking this conflict, we can work towards holding our own leaders accountable, and press them to create a more diplomacy-friendly atmosphere. Put differently, for many of us, not taking sides also involves pushing back against the absurd one-sided narrative overwhelming the print and airwaves of our state-run media. This unfortunately plays into the dangerous “you’re either with us or against us” narrative being perpetuated, where people are being accused of being “traitors” merely for trying to view things through the lens of the other side. It is a divisive mentality that is badly hurting our country, even worse than it did during the “freedom fries” Iraq War era. 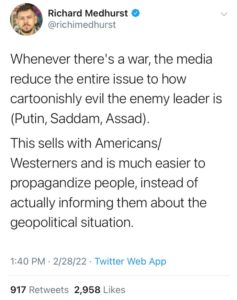 The West did not do all it could to prevent this war, nor as of this writing, has it taken any of the obvious offramps to ending it. There has been much media outcry about Putin’s alleged aversion to diplomacy, yet the U.S. and NATO have never even offered anything that were reported to be his demands, such as agreement to neutrality of Ukraine, withdrawal of surrounding NATO forces, or the independence of Donetsk and Luhansk. Instead, the prevailing narrative is to ignore the U.S.’s role in the 2014 Maidan Coup, which resulted in the installation of a Russia-hostile NATO puppet, and to ignore the neo-Nazi element of the Ukraine government (Azov Battalion, et al), who are responsible for many of the 14,000 deaths in the Russian-speaking Donbass regions over the last 8 years.

Even among those who claim to be antiwar, there may be some complacency on this topic due to the misperception that we are already practicing non-intervention, just because we aren’t sending troops directly into Ukraine and are not yet imposing a no-fly zone. The reality is that we are already co-belligerents towards Russia, per the billions of dollars of weapons we have sent Ukraine over the last several years. The Biden administration continues to ramp up spending to arm Ukraine, and Russia has formally warned it to stop doing so. Those who don’t take the threat of this escalating to WWIII should consider that Putin has thus far delivered on all the things he said he would do, including the February invasion itself. 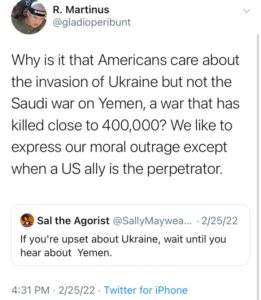 The majority of Americans rely on mass media to tell them what to be outraged about, and for whom to have compassion, and thus are either silent about or vocally supportive of arming Ukraine, under the assumption that this will help them “win.” But have they even considered that these weapons may only serve to prolong the war? For the civilian population in Ukraine, there are no real winners so long as war is being waged. The idea of “humanitarian war” sounds very noble, but true victory for humanity lies in that which results in the quickest path to peace. And the interpretation of what that path is largely depends on what news sources one is following. To hear our corporate, military-industrial complex friendly sources tell it, Ukraine is close to victory, if only we can get that next shipment of weapons to them. Military experts such as Colonel Douglas MacGregor and former U.N.-weapons inspector Scott Ritter say this is not the case. They attribute Russia’s inability to have already achieved a quick and decisive victory on their own restraint and limited scope of military goals, not on extra firepower provided by the West. And yet they don’t presume to know all that is happening in the field, nor to have access to the “Russian playbook,” as their critics like to straw-man argue.

So which version of what is currently happening in Ukraine is correct? It might serve to ask a few questions at this point: How many other things have the official sources gotten right over the last 2 decades? Are Iraq, Syria, Libya, and Yemen really any better off due to our military intervention? What is different about this time?

Or, instead of taking this merit-based approach, one could take the safer and simpler starting point that there is misinformation on all sides, since truth is the first casualty of war. Both sides are capable of propaganda, and so an educated opinion should require attempting to sift through both. But should this be too arduous a task, sifting through neither, while accepting non-intervention as the default correct position, is a good alternative. In either case, the non-interventionist position proves to be superior, as it does not risk having to advocate something that might inadvertently be causing more net harm than good. 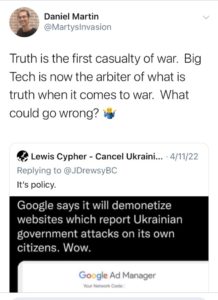 Bottom line, the notion that we need to do something to help Ukraine “win” this war is as shaky a proposition as was made by future President Obama when he spoke here in front of the Lancaster train station in 2008: that “Afghanistan is a war we have to win.” Will Americans’ well-intentioned but heavily exploited compassion for Ukraine help turn it into a long-term Afghanistan-like quagmire?

Colonel MacGregor yearns in his interview with Dave Smith, “why can’t we go back to the kind of country that we were a hundred years ago, which in most cases, was interested in intervening to end conflicts, not with military power, but to offer its services as an objective partner, as someone who could bring two sides together and avoid a larger more destructive conflict.” Does this sound like isolationism and lack of compassion for our fellow man? Should we continue to listen to the neoconservatives and alleged “humanitarian” interventionists? The future of Ukraine, and humanity, may depend on a resounding “no.”

This article was originally featured at the Libertarian Party of Lancaster County, Pennsylvania and is republished with permission.

Daniel Martin has been published in a variety of outlets including The American Conservative, Counterpunch, and elsewhere. He is currently the resident antiwar writer for the Libertarian Party of Lancaster, Pennsylvania.