Nothing But Welfare Queens: American Aid to Zelensky and Tsai Ing-wen

Nothing But Welfare Queens: American Aid to Zelensky and Tsai Ing-wen 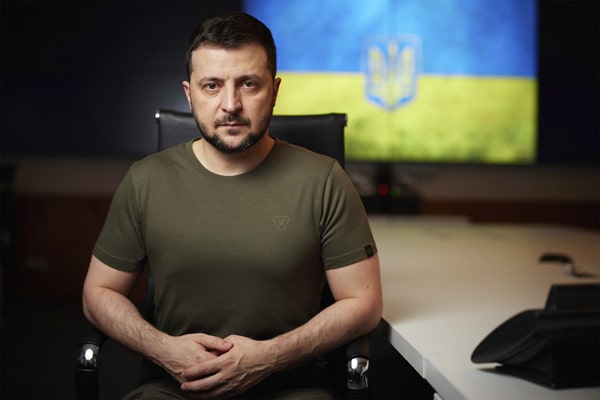 As it pertains to the American public, Ukraine’s response to the Russian invasion can be summed up with two words: “Zelensky demands.”

To date, Washington elites and their politicians have been happy to provide—at public expense—lining their own pockets in the process.

As of this writing, U.S. aid for Ukraine has reached approximately $67.5 billion, a figure greater than Russia’s entire 2021 military budget. According to the State Department, this support includes $15.2 billion in direct military assistance. The support comes although 60-70% of lethal aid never reaches the front lines, according to a now-redacted CBS interview with on-the-ground activists.

Not only is the American taxpayer supporting much of the Ukrainian military, it is also supporting the Ukrainian government. The same working class Americans who were deemed “nonessential” in 2020—who saw their businesses shuttered and burned down—now have to pay entitlement programs both at home and in Ukraine. As of September 30, 2022, the U.S. has provided $13 billion in “direct budget support,” which is ostensibly used;

…to pay government salaries, meet pension obligations, maintain hospitals and schools, and protect critical infrastructure[,] support continuity operations at the national, regional, and local levels, support for [sic] the health sector, agricultural production, civil society, [and enable] programs to hold Russia and its forces accountable for their actions in Ukraine.

This latest boon notwithstanding, in the same phone call, Zelensky urged Biden to provide Ukraine with air defense systems that would be used to shoot down Russian planes.

Much like Washington’s response to COVID-19, a no-holds-barred approach to Ukraine is so widely supported, it is a foregone conclusion. Despite this, some Republicans have valiantly opposed this rampant and provocative spending. Noteable dissenters are: Sen. Rand Paul (R-KY), Sen. Josh Hawley (R-MS), Rep. Thomas Massie (R-KY), Rep. Marjorie Taylor-Greene (R-GA), and Rep. Matt Gaetz (R-FL).

Republicans like Taylor-Greene, Gaetz, and Hawley understand the cost of empire: endless warfare, a decaying homefront, and a beclowned international reputation. They understand that a war between the U.S. and Russia will be unlike anything Americans have ever experienced. Although they cloak their condemnation of war with Russia in criticism of “weak Joe Biden,” they understand it is the West that provoked this conflict and seeks to prolong it “to the last Ukrainian.” They know that the conflict—even if it remains by-proxy—is a cost war-weary working class Americans do not want and cannot afford.

They must, then, realize that the same Washington elites waxing American fat off the Ukraine conflict are cultivating Taiwanese President Tsai Ing-wen as a Zelensky in-waiting.

Although U.S. military aid to Taiwan traditionally comes by way of arms sales, that may soon change. Senators Bob Menendez and Lindsey Graham have introduced the Taiwan Policy Act—a piece of legislation that would radically overhaul Sino-American relations.

In short, “the Taiwan Policy Act would give Taiwan $6.5 billion in military aid, give the island the benefits of being a ‘major non-NATO ally,’ expedite arms sales to Taipei, and require sanction in the event of Chinese aggression.” The bill would also authorize up to $2 billion in loans to Taiwan.

On September 14, the bill passed the Senate Foreign Relations Committee. Rather than passing it as a standalone piece of legislation, the bill’s supporters currently seek to incorporate “much” of the bill into the $817 billion 2023 National Defense Authorization Act. As of Wednesday, it is not clear exactly which provisions would be incorporated.

As above noted, the Taiwan Policy Act was introduced in the Senate on June 16, 2022 by Senators Bob Menendez and Lindsey Graham. Both Menendez and Graham are ardent supporters of Ukraine and Zelensky.

Graham met with Zelensky in July to hand deliver a plaque of his proposed Senate resolution to designate Russia as a State Sponsor of Terrorism. Since the Russian invasion, Graham has made regular appearances on Fox News whipping up lethal aid for Ukraine while calling for regime change in Moscow.

Menendez, as Chair of the Senate Foreign Relations Committee, has spearheaded Washington’s Ukraine support. In January, he began and continues to lead the comprehensive U.S. sanctions campaign against Russia. In March, Menendez lambasted Congressional Republicans, mainly Senator Rick Scott (R-FL), for undermining Ukraine aid. In May, Menendez, among others, introduced a Senate resolution approving the bids of Finland and Sweden to join NATO (something Josh Hawley correctly opposed).

On June 23 Menendez specifically invoked the 75th anniversary of the Marshall Plan to stoke support for Ukraine, but the Marshall Plan came after WWII, not during it, when similar support further involves the U.S. in the conflict.

Republicans opposing U.S. support for Ukraine should take note that both Menendez and Graham have repeatedly met with Taiwanese President Tsai Ing-wen to pledge American support for Taiwan. In their latest visit on April 15, 2022, president Ing-wen called Lindsey Graham a “pillar of strength for Taiwan in the U.S. Congress” and dubbed Menendez one of Taiwan’s “staunchest friends.”

In his meeting remarks, Graham likened U.S. support for Ukraine to its support for Taiwan, saying:

[a]s we’re here today to show our support for Taiwan, all of us have our hearts broken regarding the people of Ukraine…I just want to let you know that, while we’ve been watching the Ukraine on television, while it has broken our hearts, the American people understand how important you are to us…So here’s my promise to the Taiwanese people: We’re going to start making China pay a greater price for what they’re doing all over the world. The support for Putin must come with a price. The never-ending cyberattacks on your economy and your people by the Communist Chinese need to come with a price.

Menendez echoed Graham’s sentiment in his own remarks, shedding light on Washington’s Ukrainian plans for Taiwan:

…I am proud to be back to reaffirm our rock-solid relationship with Taiwan…So you have a high-level delegation whose attention could be brought any place in the world—and for which many of our colleagues are right now in Europe, dealing with the challenges of Ukraine—but we understand that here in Taiwan, here in this region—this is where the future is. [Emphasis added].

Menendez followed up these remarks with an op-ed in The New York Times, stating:

Vladimir Putin’s brutal attack on his Ukrainian neighbors has sparked global outrage — and forged unprecedented unity—among the democratic nations of the world. Not so with Xi Jinping, the hypernationalist president of the People’s Republic of China. Rather, he is no doubt taking notes and learning lessons from Russia’s unprovoked attack on Ukraine to apply to his plans for Taiwan. The United States and our partners in the international community need to do the same to develop and put in place a new and more resilient strategy for Taiwan while there is still time.

These remarks should terrify working class Americans. Essentially, Menendez is proposing a redoubling of military support for Taiwan—the same “preventive policy” which played a large role in provoking Putin to invade Ukraine. We simply cannot afford it.

The above-named Congressional Republicans were right to oppose aid to Ukraine. For those same reasons, they should oppose adding Tsai Ing-wen to the same dole as the entitled and ungrateful Zelensky. Like Rand Paul, they should oppose the Taiwan Policy Act in all its forms.