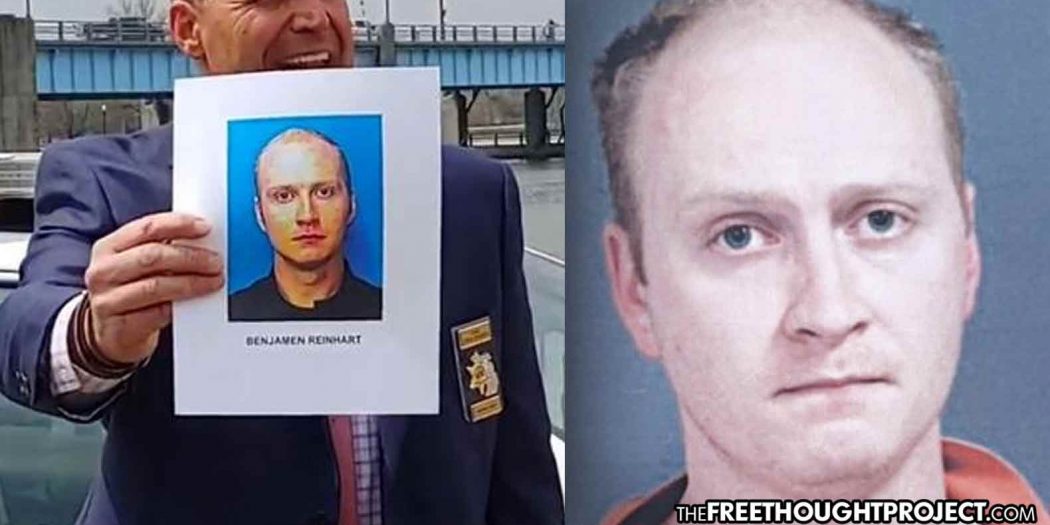 Benjamin Reinhart, a disgraced officer with Genesee County received some great news this week. Despite being caught up in a child sexual trafficking sting, he won’t have to go to jail and he won’t have to register publicly as a sex offender.

Reinhart was “sentenced” this week as part of a plea deal, to just five years of probation. The Genesee Human Oppression Strike Team, or GHOST, caught the officer in April attempting to lure a child for sex. He was on duty at the time.

Despite facing multiple charges, Reinhart was given a sweet plea deal for pleading guilty in August to a single count of using a computer to commit a crime and one count of misconduct in office.

In exchange for his guilty plea, the charges of child sexually abusive activity and children accosting for immoral purposes, were thrown out. Prior to his plea deal, this sexual predator was guaranteed that he would have no jail time as well as a cap of six months on a jail tether.

For those who may not know, “tether” is an electronic monitoring device that allows parole officers to monitor and enforce curfews and other conditions of community supervision for those released from jail or on house arrest.

Despite attempting to lure a child for sexual abuse, Reinhart will also not have to register publicly as a sex offender. He will only be placed on the non-public sex offender registry.

According to mlive, Reinhart was arrested and fired from his position with the Genesee County Sheriff’s Office in April after he allegedly exchanged messages with an undercover officer posing as a 15-year-old girl online, Genesee County Sheriff Chris Swanson said during an April news briefing.

Swanson told reporters that Reinhart had sent 446 messages to the undercover officer he believed was a child, attempting to groom her. He also sent 118 messages and six sexually explicit images while he was on duty and demanded the same in return.

Apparently, prosecutors don’t think he is a threat to society, so he is back in it—a free man.

Imagine being okay with not giving this predator any jail time. Imagine thinking that it is fine for the public not to know about his attempts to lure a child for sex. Then, imagine that these same people will lock you in a cage for years for being caught with arbitrary substances.

In this same state, countless people are rotting in a cage for possession of a plant. One of those people is Rudi Gammo who was charged in 2018 with operating a medical marijuana dispensary before voters approved of legalizing adult use of marijuana.

He was literally helping people, giving them medicine that they needed and because of a minor technicality in the law, he was thrown in a cage and is still serving a five and a half year sentence. He never hurt anyone and marijuana is now legal both medically and recreationally in the state.

“I’m in here under the pandemic. Everyone else is doing the same thing that I did years ago. I’m paying the price for it. My family members are the victims. My family is struggling without me. My son has leukemia,” Gammo said in a phone interview earlier this month with ClickOnDetroit. “Even if I have to stay here, as long as I know I got those people supporting me, I can’t ask for nothing more.”

When child predator police officers receive no jail as completely innocent cannabis farmers and distributors rot behind bars, it may be time to rethink the justice system in the land of the free.