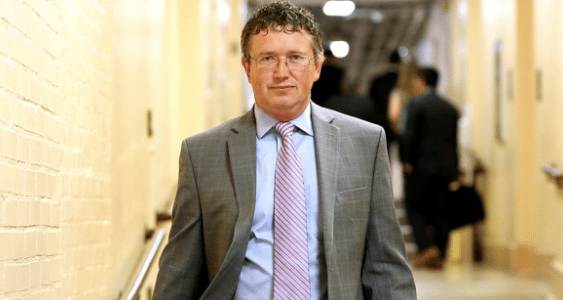 Thomas Massie, U.S. House of Representative from Kentucky’s 4th District, took a lot of heat for trying to force a voice vote on the House floor to pass the $2.2 trillion Coronavirus Aid, Relief, and Economic Security (CARES) Act.  In a glorious show of bipartisanship, both sides of the aisle poured out their vitriol on the double-degreed MIT graduate.

Rep. Peter King, (R-N.Y.) said in a tweet Friday morning: “Because of one Member of Congress refusing to allow emergency action entire Congress must be called back to vote in House. Risk of infection and risk of legislation being delayed. Disgraceful. Irresponsible.”

Rep. Steve Cohen (D-Tenn.) told the NY Post, “It was not cool, not cool at all.  We’ve all got to wait 14 days to see what happens. Hopefully, none of us get ill. If it weren’t for him, we wouldn’t have had to come [back]. He put people in jeopardy, there’s no question about it.”

John Kerry said, “Breaking news: Congressman Massie has tested positive for being an ass*&@#.  He must be quarantined to prevent the spread of his massive stupidity. He’s given new meaning to the term #Masshole.”

Never one to pass up a Tweet-able moment, President Trump tweeted, “throw Massie out of [the] Republican Party!” Later, he supported, via Twitter, a the Kerry authored tweet aimed at Massive when he said, “Never knew John Kerry had such a good sense of humor! Very impressed!”

For his actions, Massie stands on pretty sure constitutional grounds.  Article 1, Section 5, Clause 1 of the U.S. Constitution says: “Each House shall be the Judge of Elections, Returns, and Qualifications of its own Members, and a Majority of each shall constitute a Quorum to do Business; but a smaller Number may adjourn from day to day, and may be authorized to compel the Attendance of absent Members, in such Manner, and under such Penalties as each House may provide.”

In defense of his actions Massie said the following on Twitter:

I  swore an oath to uphold the constitution, and I take that oath seriously.  In a few moments I will request a vote on the CARES Act which means members of Congress will vote on it by pushing “yes” or “no” or “present.”

The Constitution requires that a quorum of members be present to conduct business in the House. Right now, millions of essential, working-class Americans are still required to go to work during this pandemic such as manufacturing line workers, healthcare professionals, pilots, grocery clerks, cooks/chefs, delivery drivers, auto mechanics, and janitors (to name just a few). Is it too much to ask that the House do its job, just like the Senate did?

Massie went on to say:

I am not delaying the bill like Nancy Pelosi did last week.  The bill that was worked on in the Senate late last week was much better before Speaker Pelosi showed up to destroy it and add days and days to the process.

This bill should have been voted on much sooner in both the Senate and House and it shouldn’t be stuffed full of Nancy Pelosi’s pork- including $25 million for the Kennedy Center, grants for the National Endowment for the Humanities and Arts, and millions more other measures that have no direct relation to the Coronavirus Pandemic. That $25 million, for example, should go directly to purchasing test kits. The number one priority of this bill should have been to expand testing availability and creation of tests so that every American, not just the wealthy and privileged, have access to testing. We have shut down the world’s economy without adequate data. Everyone, even those with no symptoms, needs immediate access to a test.

This brings us to the crux of the matter and why you, as an American citizen, should direct your outrage at everyone but Rep. Massie.  The CARES act is, on its face, unconstitutional. Where in the U.S. Constitution does it authorize Congress to conjure up $2.2 trillion dollars, then hand it out to the American people?  Notice the response that politicians (or more accurately) statesmen gave in response to calls for aid during an earlier part of the country’s history.

1794: Congress undertook to appropriate $15,000 ($352,740 in today’s dollars) to assist French refugees.  In response, James Madison, one of this country’s founding fathers, said, “I cannot undertake to lay my finger on that article of the Constitution which granted a right to Congress of expending, on objects of benevolence, the money of their constituents.”

1796: U.S. Representative William Giles of Virginia was not in favor of extending relief to fire victims saying that Congress didn’t have a right to “attend to what generosity and humanity require, but what the Constitution and their duty require.”

1854: President Franklin Pierce vetoed an appropriation bill to assist the mentally ill saying, “I cannot find any authority in the Constitution for public charity.”

1887: President Grover Cleveland said, “I find no warrant for such an appropriation in the Constitution, and I do not believe that the power and the duty of the General Government ought to extend to the relief of individual suffering which is in no manner properly related to the public service or benefit.”  Cleveland said this as part of his vetoing of a bill appropriating money to aid farmers in Texas who were suffering from a severe drought.

What the House and Senate did in passing the CARES Act is bad enough.  President Trump invoked something called the Defense Production Act.

Today, I signed a Presidential Memorandum directing the Secretary of Health and Human Services to use any and all authority available under the Defense Production Act to require General Motors to accept, perform, and prioritize Federal contracts for ventilators.  Our negotiations with GM regarding its ability to supply ventilators have been productive, but our fight against the virus is too urgent to allow the give-and- take of the contracting process to continue to run its normal course.  GM was wasting time.  Today’s action will help ensure the quick production of ventilators that will save American lives. (emphasis added)

Enacted by the 81st Congress on September 8, 1950 in response to the Korean War, the act was put in place to: establish a system of priorities and allocations for materials and facilities, authorize the requisitioning thereof, provide financial assistance for expansion of productive capacity and supply, provide for price and wage stabilization, provide for the settlement of labor disputes, strengthen controls over credit, and by these measures facilitate the production of goods and services necessary for the national security, and for other purposes.  The act basically gives the president broad and sweeping control of the economy for the purposes of national defense (i.e. during war time). He can compel, with the full force and weight of the federal government, private companies to do as he says (in the name of national defense) in direct violation of said companies’ property rights. And I have yet to mention the fact that the government will need to create trillions of dollars out of thin air and borrow trillions more to fund CARES Act relief. The money creation and government borrowing will ultimately decrease American citizens’ standard of living through ballooning price inflation and a diversion of resources from businessmen and women.

For the umpteenth time, unscrupulous, unprincipled, and downright deceitful politicians managed to manufacture an overreaction to the coronavirus using it to justify harming the country by their passage of unconstitutional legislation.  Our so-called “public servants” truly never let a crisis go to waste.

As an American citizen you ought to be outraged.  However, your outrage should be directed at Trump, his administration, and Congress, not Thomas Massie.

Humans are speakers. When we go to work, buy paintings, send birthday presents to friends, vote, and choose TV shows to watch at night, we don’t merely “do”—we say. We say what our preferences, ideals, and distastes are in the realms of commerce, art, love, and...

END_OF_DOCUMENT_TOKEN_TO_BE_REPLACED

Military Honor, the Virtue and the Curse

Honor is a powerful idea. Those who live by it take it seriously. It is not will, courage, or even valor, though it does demand such things. It is the code that exists within, demanding one to do what is right, regardless of risk or reward. Honor for is paramount to...