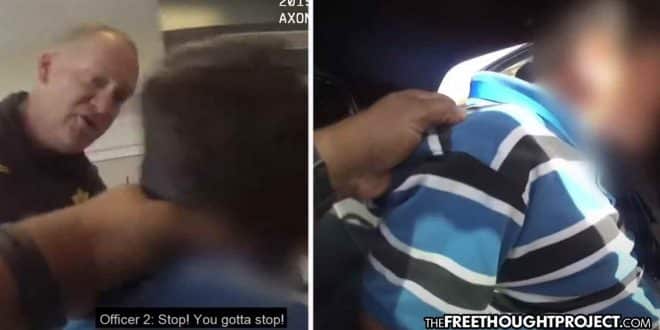 Utterly heart-breaking video was released this week as part of a federal lawsuit, accusing Douglas County school and sheriff’s officials of “aggressively” handcuffing a child with autism and locking him up after he poked a classmate with a pencil. The pencil poke was in response to that student writing on him with a marker and the teacher failing to stop it.

The incident unfolded on Aug. 29, 2020 after deputies decided to arrest the child known as A.V. in the lawsuit.

According to A.V.’s mother, Michell Hanson, the student who wrote on her son has a history of giving A.V. a hard time. He writes on A.V’s arm with markers and then tries to write on his clothes, according to Hanson. A.V. tries to stick up for himself and his friend and he asks several times for the student to stop, but they continue and the aide never intervenes. That’s when A.V. pokes him twice with his pencil. The student was reportedly uninjured.

According to the lawsuit, filed by the ACLU:

On August 29, 2019, A.V. faced disability-related challenges when a classmate at Sagewood Middle School wrote on him with a marker. A.V. is part of an affective needs classroom and has an individualized education plan (IEP) that outlines his necessary accommodations and potential triggers, like touch. A.V. was triggered by the student writing on him and the classroom aide did not intervene. A.V. got upset and poked the other student with his pencil. Even though A.V. left the classroom voluntarily after this and was calming down with the help of the school psychologist, the SROs insisted on stepping in and a situation that could have been handled constructively became a criminal matter.

Because school cops have only one tool available at their disposal—force—A.V. was not simply told that he messed up and not to do it again. He was handcuffed, assaulted, and actually arrested and brought to jail where he was held on a $25,000 bond.

As the video shows, instead of simply walking the completely non-threatening boy to the office and calling his parents, the officers moved to arrest him. He was then handcuffed, which appeared to cause him traumatizing stress.

“Stop, you’re hurting me,” he yelled. “Stop, you’re choking me,” he said again when the officer grabbed him by the neck. As the officers continue their assault, the boy goes into panic mode and starts screaming in horror and banging his head.

Anyone who knows someone with autism knows that simply being touched is bad enough, but being restrained, handcuffed, and manhandled by armed men, can be utterly horrifying. The stress of his assault causes A.V. to begin banging his head inside the school, which continued after A.V. was thrown in the back of the cruiser.

When A.V.’s father showed up at school, police told him that he cannot see or speak to his son and they are charging A.V. with assault on a police officer and poking the student with a pencil. A.V. is an 11-year-old child with autism and these cops had the audacity to charge him with assault.

A.V. ‘s parents frantically contact the facility several times throughout the day trying to find out when he will arrive and to let them know about his diagnosis of autism. They leave several messages for the medical team and talk with the administration staff, desperately trying to inform them about his triggers, like certain sensations and loud sounds. But despite their pleas, the family is told that A.V. will have to be put into the general population once he is checked in. The family is finally able to come up with the bond later that night. According to the family, everyone at the facility is shocked that an 11-year-old boy with autism would be there in the first place — let alone on a $25,000 bond. Finally, after more than 10 hours, A.V. is released; but the ordeal has only just begun.

“When we saw him, his forehead and arms were so swollen and bruised,” his mother Michelle Hanson said. “A.V. doesn’t headbang. He must have been extremely dysregulated. After we bailed him out, he wouldn’t eat, wouldn’t speak. A.V. was—is—definitely traumatized. We all are.”

The next day, they call the facility to find out if A.V. was medically examined so that they can understand the extent of his injuries. The center says they were not notified by the police to do a medical exam on A.V., even though he was handcuffed for several hours, had banged his head repeatedly in the police car, and was visibly dysregulated and traumatized while in custody. If the role of SROs is to keep kids safe from harm, then they failed A.V. miserably.

“A.V. has suffered both physically and emotionally as a result of the SROs’ violations of his rights,” said Arielle Herzberg, ACLU of Colorado Staff Attorney. “The Douglas County School District and Sheriff’s Office have a pattern and practice of their officers mishandling situations involving students with disabilities and unnecessarily ensnaring them in the criminal legal system. Handcuffing kids should never be used as classroom management and making parents pay thousands of dollars in bond for their safe return is unacceptable.”

We agree. Luckily, a judge did too and all charges against A.V. were dropped. Though he no longer faces charges, A.V. faces possible years of recovery ahead and may never be the same again. Unfortunately, this scene is becoming more and more common as schools choose to rely on police force instead of ingenuity and training.