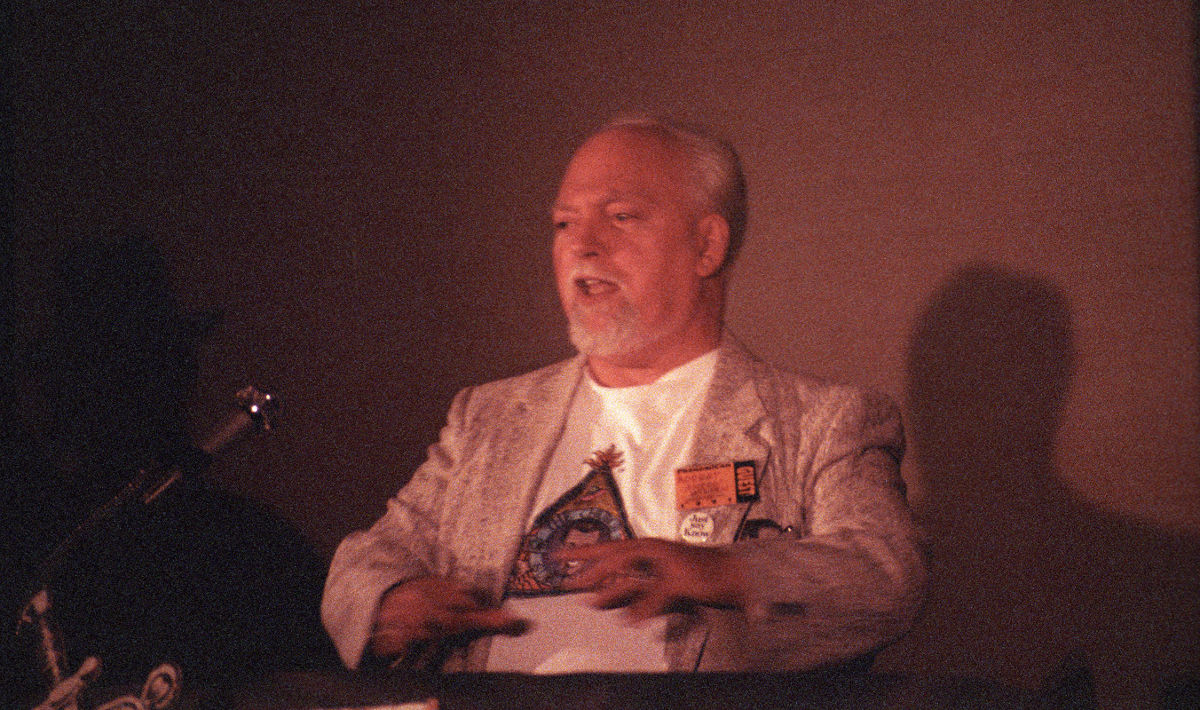 Robert Anton Wilson was born Robert Edward Wilson on January 18, 1932, in Brooklyn. That distinctive middle name, Anton, was the first name of his maternal grandfather, who left Trieste — today Italy, then the Austrian Empire — to escape military conscription, which Wilson considered a courageous and heroic act. When he took Anton as his middle name, Wilson believed he would return to his given name when he had one day amassed the prestige necessary to write serious literature. Thank goodness Wilson never became quite so serious.1 In the Brooklyn of his youth, Wilson was raised in a kind of poverty and want few Americans alive today would recognize. To make matters worse, when he was only two years old Wilson was diagnosed with polio, which his doctors said would leave him unable to walk. If we believe his account, the Sister Kenny method saved young Robert, even as the establishment medical community and its licensing cartels damned the controversial treatment. This early experience with the controversial and unorthodox left Wilson with little use for conventional wisdom of any kind, little trust in the expertise of the properly credentialed.

Wilson sought others interested in far-out and dissentient ideas, and he found them. His ventures off the beaten path led him to one Ralph Borsodi, a self-sufficiency guru and homesteader who abandoned an urban life of corporate work, congestion, and filth for a different and, in his view, better way. Already inclined toward anarchism and the politically unconventional more generally, Borsodi’s School of Living was the conduit through which Wilson encountered the ideas of Benjamin Tucker and others in the individualist tradition. Those ideas, in turn, had come to the School via its association with second-generation anarchist Laurance Labadie, with whom Wilson would share countless conversations on anarchist theory. It was a fortuitous turn that the School of Living’s newsletters and periodicals should have reached Labadie in Detroit, half than a century or more before the presence of the internet made connecting with like-minded individuals relatively effortless and instantaneous. As Borsodi’s closest associate at the School, Mildred Loomis, observed, despite Borsodi’s curiosity as an “inveterate seeker,” he “had somehow missed America’s individualist anarchists until he met Laurance Labadie at Lane’s End in the early 1950s.” If, as Jeff Riggenbach reflects, understanding Wilson’s thought requires understanding Borsodi’s, then certainly both owe a great deal to the Keeper of the Flame, Labadie. Much as Tucker had pressed readers of Liberty, Labadie pushed Borsodi and Wilson to follow their anti-authoritarian instincts to their logical endpoint.

Wilson assumed the editorship of the School’s magazine, Balanced Living, rechristening it as the more libertarian-sounding A Way Out in an effort, he said, to “attract a younger, hipper readership.” Wilson also persuaded Norman Mailer to contribute several poems, which he hoped would draw the attention of “the intellectual world.” Other notable contributors at the time included Paul Goodman, Murray Rothbard, Sidney E. Parker, Frank Chodorov, and Robert LeFevre. Together with other movement eccentrics like Labadie, Wilson was a living bridge between an older, left-flavored individualist anarchist current and the present-day libertarian movement. As Brian Doherty observes in his definitive history of the movement, Wilson “was one of the last of the pure Benjamin Tuckerites,” though Wilson would undoubtedly have bristled at being labeled a pure anything.

Wilson’s worldview affirmed life and repudiated anything he saw as an unhealthy obsession with death and “the deathist philosophy.” But Wilson was never moralistic or ideologically committed. Max Stirner’s consciously amoral egoism, filtered through Benjamin Tucker, apparently left its mark on Wilson, who rather defiantly insisted that he would do anything, murder included, to avoid leaving his children in poverty and added, “I regard morality and ideology as the chief cause of human misery.” Stirner’s language, in particular his burning desire to shatter all “fixed ideas,” became a conspicuous part of much of Wilson’s work, both fiction and nonfiction. Wilson described himself as “mildly puzzled all the time,” his natural curiosity preventing him from settling on any absolute truth, motivating him constantly to revise and update. Thus did he maintain a position of “neurological relativism.” He derided True Believers of all kinds, holding that the “reality maps” to which they clung so inflexibly were all equally wrong—or, at the very least, equally limiting. Wilson therefore counseled and practiced what he termed “a state of generalized agnosticism,” that is, “agnosticism about everything.”

Captivated in the early ’60s by the communist anarchism of Peter Kropotkin—as elucidated in the Russian aristocrat’s famous Encyclopedia Britannica article on the subject—Wilson had since (owing in no small part to Labadie’s influence) revised his anarchism in a decidedly more individualistic direction. Yet salient features of Kropotkin’s thought remained with Wilson. Kropotkin’s article stresses, for example, that even an anarchist “society would represent nothing immutable,” that instead anarchism contemplates a social harmony resulting “from an ever-changing adjustment and readjustment of equilibrium between the multitudes of forces and influences.” In all of Wilson’s work we find the rejection of the rigid and immutable in favor of a spirit of skepticism and free inquiry.