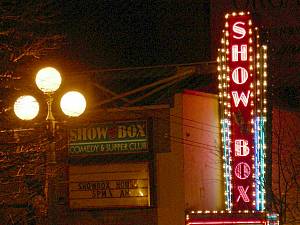 A few months ago, Sawant was fighting for the “Amazon tax,” a literal tax on jobs that would have raised some $75 million annually to fund affordable housing and services for the homeless. Now, however, the one self-identified socialist on the Seattle City Council is doing her best to kill a proposed downtown building that would provide 442 apartments and $5 million for the city’s affordable housing fund from the project’s developer, the Canadian company Onni.

Sawant is willing to forgo that money because the apartment building would replace a music venue that currently occupies the spot, Seattle’s iconic Showbox. “If we let the Showbox be demolished, then everything else is moot,” Sawant warned Bloomberg last week.

The fight for the Showbox, where performers such as Duke Ellington and Pearl Jam have appeared, began in late July, when it was first reported that Onni’s project would require the venue’s demolition. A petition calling for the preservation of the concert hall netted nearly 100,000 signatures and the endorsement of famous Seattle artists such as Macklemore, Guns and Roses bassist Duff McKagan, and Death Cab for Cutie singer Ben Gibbard. The cause was quickly picked up by Sawant, who introduced legislation last week to declare the Showbox part of the nearby Pike Place Market Historical District, which would essentially kill Onni’s project.