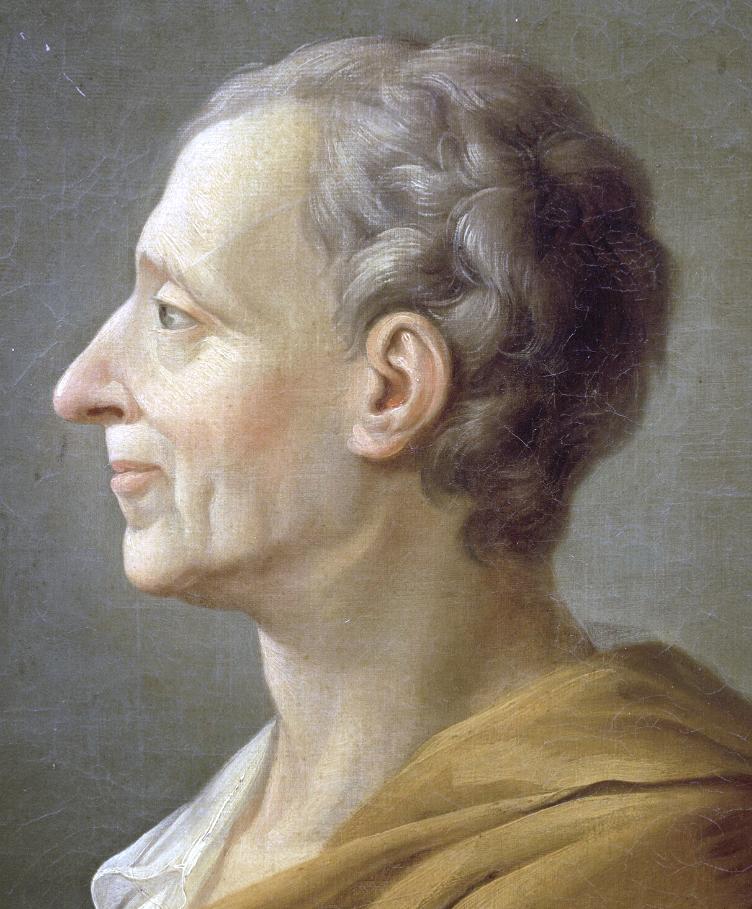 The separation of powers is an old liberal principle that every grade school student knows originates from one Baron Montesquieu.  Yet, this principle is derived from which ideas exactly?  We say that separation of powers limits the abuses of despotism.  However, Congress’ powers vis-a-vis the President – democracy’s “executive” – are meaningless, in that the bureaucracy (the “fifth estate”) has used Congress’ power vis-a-vis the President himself to empower an administrative state that even the President has little real power to control.  The Supreme Court – a federal entity appointed by federal politicians – almost universally rules in favor of federal power over states and their ability to resist it.  Where is our protection via separation of powers?

The idea of separation of powers makes much more sense in a libertarian/Rothbardian society.  Anarchy.

In a Rothbardian society, the enforcement of law is handled by private firms which compete for customers.  In real practice these firms physically detain or arrest those who violate the rights of individuals.  However, this practice of institutions freely going around violating the freedom of individuals would lead to immediate and widely disfavored abuses were it not for one fact.  The enforcement agency would necessarily have to have an independence from the judicial process.  To arrest a person, a firm has to have some kind of ruling from an independent judge.  Why is this?

Well, for one, the obvious: power must be separated from self-interest. This principle is the essence of left-wing political ideology.  However, allow me to offer a more libertarian interpretation.  That is, let us view power through an economic lens.  Let’s do a market analysis of power.

Law is a substitute good for power.  Without law, violence entrepreneurs (tribal chieftans, statesmen, kings, mafia dons) have to “spend” violence (lives of fighters, or resources to weapons) to obtain resources (specifically, those which are competed over by multiple parties).  This can become costly.  As the market saturates (high feudalism, for instance, with significant resources devoted to the professional warriors such as knights), some substitute is needed to settle disputes outside the conventions of warfare.  This is where law comes in.  Law settles disputes more cheaply than fighting.

Enforcement agencies, rights protection agencies – a naked market interpretation of the executive power in a state – are violence agencies.  In order for these to be servants of law and not raw power, these agencies need independence from the interpretation of law.  If these agencies’ strength – their claim to value – is grounded in them interpreting who gets to win in disputes – then these agencies are mere violence entrepreneurs.  The same market forces which apply to mafia dons would apply to them.  These would stabilize as these firms monopolize power in certain territories and borders are drawn, states formed, and so forth.

For a market of violence to avoid becoming a greedy despotic monopoly state, it needs to separate the service of effective provision of force or physical compulsion from the determination of who gets to benefit from that provision of force.

Here, then, is the market interpretation of separation of powers.  Without separation of powers, the market for violence would reach equilibrium with monopoly powers over discrete territories.  With separation of powers, law may be substituted for power as the object of market outcomes.  Thus, the value of power is grounded in its service to law.  Independence of violence from law is what legitimizes violence.  Legitimacy, in this context, is consumer preference.  Power serving law, not interest, is more valuable to the market.  This kind of power faces a market environment where monopoly is less lucrative, because of law.

Obviously, the executive would exist as firms which exercise force or violence in society.  These would face the most scrutiny.

The judicial would be independent judges, who shape precedent while deciding individual cases.  Different individuals would defer to different judges, but fairness and prudence would lead judges to win the blessing of consensus.  Sure, such judges would not necessarily reflect the law perfectly.  Some might have to defer to “labor”, but if they did it’s only because there’s a mass of people who might otherwise do violence if the situation at large is harmful to them.  Likewise, money could shape consensus, but then again value creation and wealth reflect that which favors society’s enduring material progress.  Stability.

Even so, we are missing a component.  The legislative.  Where does this fit into a Rothbardian society?  I haven’t heard many libertarians discuss this third “branch” of the separation of powers in the context of anarchy.  I think the legislative element of power is represented in an anarchic society in a fairly obvious way.

The legislature is the consumer, and consumer preference in the market.  That is, each individual or entity (firm, company, group, coop, whatever) is entitled to declare its allegiance to, and opinion concerning law.  Which judicial rulings and precedence you accept, or not.  Offering true separation of power from the judicial.

When you deal with others, you declare your legal preferences, and they theirs.  From this initial position, numerous interactions are shaped.  Before any application of law, people will self-select those with whom they deal – or more importantly – how they will deal with those whose legal preferences differ.

Thus, the legislative in a libertarian society is a function of people declaring diverse preferences to each other, and voluntarily responding to these differences before ever dealing with a legal proceeding.

It’s important to note this.  Before any “rights agency” is involved, libertarian society is the open expression of difference and the voluntary response to such, first and foremost.

Only when disputes are irreconcilable, or persons act in a manner so contrary to the vast consensus (basic theft or murder, and so forth), then do you involve a judiciary.  A respected judge whose very value is derived from the fact that we would live in a world where any given judge can possibly be completely ignored (so they have to garner widespread respect and conform to a market “democratic” consensus) would invoke the legal preferences of the parties involved.  A good judge would bridge these differences, and precedent would exist largely to understand or grapple with bridging differences (principles of peace).

Only after all this (voluntary acceptance of each others differences including boundaries and deference, then just and widely accepted legal opinion evolved specifically to deal with different opinions), would agencies that exercise physical force become involved.

In such a society, the pressure of consensus, peace, reason, compromise, and so forth would greatly overpower the value of power through physical force.  For economic reasons.

EDIT: I’ve realized that a summary of each “branch” of power, in the context of anarchy, is needed to conclude this article.

The legislative: The consumer – in the context of past legal precedent (real logic applied to real situations with real evidence about real grievances), chooses which precedent they accept, or not.  This opinion more or less must be publicly shared, and people will adjust their behavior given the stated preferences of others.

The judicial: Judges who sell their services.  The nature of judicial power is that it can possibly be completely ignored.  Judges will succeed inasmuch as they can garner respect for bridging the differences people have in their own legislative preferences as consumers of legal services.  Judges have to fit legal opinion in with market legal preferences.  Everyone will know that people have different preferences, but universally there will be an understanding that law is valuable because it eliminates the costs of conflict.  The value of judges will lie in their ability to use evidence and reason to nevertheless cater to consensus.  If they are corrupt – serving “interests” – then they lose their value as judges.

The executive: Rights protection firms.  These firms are defined in terms of the costs of conflict.  All conflict and exercise of physical force imposes a cost.  Cost minimization involves deference to judicial opinion, which can also be a source of value in attracting customers.  The particulars of law are irrelevant to such firms, but the independence of law is important in minimizing cost.  Ideally, criminals themselves face a situation of voluntary cooperation with a punishment rather than resisting prosecution.  An effective, profitable rights firm executes law without having to ever invoke use of physical force.  Per Bob Murphy, criminals can attend cushy resort prisons where their freedom is denied and they are separated from society and unable to harm it.  And yet, the comfort of these prisons may be enough incentive for them to prefer voluntary incarceration rather than running from the law.

Again, a peaceful, law-driven society is also a consensus society.  This includes some concessions to left-wing ideas about society, and the abandonment in some cases of pure justice.  On the other hand, forget about welfare checks.