Solve the Sanctuary-City Conflict by Granting Statehood to Cities

Solve the Sanctuary-City Conflict by Granting Statehood to Cities 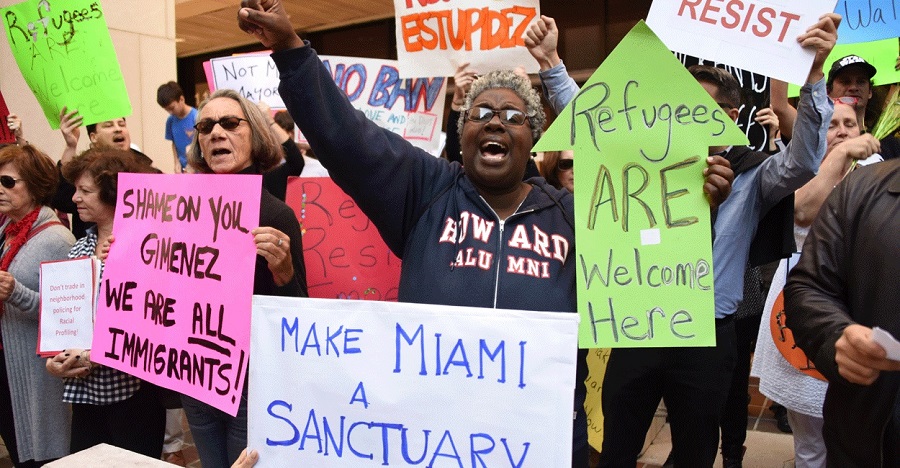 The battle over sanctuary cities is not just a matter of pitting some cities against federal policy. The conflict is also pitting cities against state governments.

More than 30 states have moved with varying degrees of success to rein in so-called sanctuary cities that have pledged to not assist federal agents with rounding up and prosecuting suspected illegal immigrants.

So far, though, Texas appears to have taken the biggest step with new legislation that “requires local law enforcement agents to honor requests by federal immigration agents to detain jailed immigrants suspected of being in the country without proper documentation. It also empowers local law enforcement officers to ask about a person’s immigration status during routine encounters, such as traffic stops.” The legislation, known as Senate Bill 4, was signed into law by Texas Governor Abbott on May 7.

In response, several cities have sued the State of Texas, claiming the attempts by state government to force compliance on cities is an abuse of “big government.”

Thus, state-city relations are not analogous to state-federal relations.

But, laws and constitutions can be changed, and political solutions can offer answers where legal ones do not.

The Historical Models for States Are Becoming Obsolete

In our age of increasing migration to metropolitan areas, we need to re-evaluate out model for political jurisdictions and state boundaries.

Historically in the United States, the states themselves often took shape as one or two urban centers attached to a hinterland of rural areas and small towns.

This was true for Massachusetts, New York, and Illinois historically. In these areas, one large city often dominated state-level politics. Naturally, this led to conflict. Voters and politicians in the urban centers often had very different priorities than the voters and politicians in smaller cities, and in rural areas. Moreover, different regions competed in a zero-sum game for tax funds, and some regions of the state ended up subsidizing other regions. Nevertheless, mega-cities and villages were stuck with each other because through an accident of history, they all ended up under the same state government and set of laws.

Today, of course, we see this reflected in the conflict values we see between urban centers, rural areas, and suburban areas. Voters from suburbs and small towns in many states find themselves at odds with the residents of the urban core.

It is true that suburban areas are generally dominated by different political values and different economic interests than are the urban core. Nevertheless, like the small towns and villages before them, suburban areas are locked into a union with core urban areas because they happen to fall under the same state government.

Today, we live in a country where the status quo of state boundaries are accepted as immutable, so conflicting groups take to the courts so one side can force its values on the other side. But, it doesn’t have to be this way.

A better response is to decentralize and allow urban core areas to act with greater independence from the suburban and rural areas that surround them.

This is to the advantage of the suburban and urban areas as well, and in this solution, we see a direct and meaningful way to address the “sanctuary cities” conflict — and many others — in which core city governments find themselves at odds with the rural and suburban populations who often dominate the state government.

Within the American context, decentralization should take the form of granting statehood to large cities.

There are at least two ways this could happen.

One option is to grant statehood to each individual core city. (In this context, a city is a specific city (i.e., the City of Phoenix), and not the larger metropolitan area in which it is located.) This would allow these cities more freedom in enacting (or not enacting) laws in accordance with the population’s values.

Politically, there is something for everyone in this plan. Left-leaning cities would be freed from more right-leaning state governments, and would no longer have to deal with suburban and rural members of a larger state legislature.

At the same time, an exit of city centers would shift the “rump” legislatures in a more conservative direction. In a scenario such as this, Texas’s effort to restrict localized sanctuary cities, for example, would cease to even be controversial. The remaining suburbs and rural areas would hardly object to anti-immigration measures, and the new urban state or states could freely oppose anti-immigration initiatives from both the federal government and from what would now be called “Old Texas.”

In terms of congressional representation, this would of course increase left-leaning representation in the Senate, as new urban-core Senators were added. But the change would also shift many Senators to the right as majorities changed in the suburban and rural states. A similar balancing act would occur in the House of Representatives.

Moreover, while the initial inclination of the new urban-core states will be to raise taxes and more stringently regulate business, the smallness of the new states will frustrate these efforts.

For example, were the new “State of Chicago” to break off from Illinois, it is likely the city would immediately raise taxes and begin imposing a bevy of new regulations on local businesses. Business, however, will quickly find that it will be in their best interest to move their operation over state lines into the Chicago suburbs where more laizzez-faire ideas prevail. Thus, over time, the wealth of the cities will be sucked into the surrounding suburban and rural areas.

The core cities, of course, could respond by lowering taxes and regulatory barriers, and this is what many would do out of necessity.

But Won’t These New City-States Be Too Small?

There is no Constitutional definition of what size population is “too small” for statehood. But, most major American cities are already larger than the smallest US states. Moreover, many US states were tiny when when admitted as states. When California was made a state in 1850, the entire statewide population was under 100,000 people. When Hawaii became a state in 1959, it contained only 600,000 people.

Today, even a medium-sized city like Denver can pass this litmus test.

In the case of Houston, the new “State of Houston” in our example would have a population of around 2.3 million, making it larger than 15 other states.

San Antonio is considerably smaller than Houston, but with 1.4 million people, the new “State of San Antonio” would still be larger than 10 current US states, including Montana, Maine, and New Hampshire. It would be about equal in population size to Hawaii.

Should critics complain this creates too many new states, then several cities can be joined into one large state. There is, of course, no reason why cities must be contiguous to create a new state. Originally, Massachusetts included a large exclave that is now Maine.

Were Houston, Dallas, and San Antonio to join into a single new state, the total population would be 5 million, making it the 23rd largest state in the nation.

Once we venture outside of Texas, we find the examples are numerous indeed. The City of New York is of course the most extreme example, with 8.5 million people. Were it to become a city state —as was suggested during the Civil War — it would be the 12th largest state in the US. Were the city of Los Angeles its own state, it would rival the state of Oregon in terms of population.

Nor do we need to limit this analysis to only large cities. Smaller cities could choose to be annexed by larger cities, if they choose, as part of our new statehood initiative, and merge into one larger urban state.

Why It Won’t Happen Soon

Unfortunately, all of this is unlikely to happen any time soon because most Americans are so enthralled with the idea of using political power to shove one’s values down the throats of the minority. If a certain group now controls the state legislature in State X, then the inclination is to keep using that power to keep forcing ones political values on the out-of-power groups. This way of thinking is the reason why most Americans oppose decentralization and secession in general. Ideological slogans like “unity” and “democracy” dictate that, no matter how much two or more populations may subscribe to irreconcilable value systems, everyone must be forced into a single political jurisdiction and submit to the majority will, even if it means forcing 49.9 percent of the population into a political regime they detest.

Reprinted with permission from the Mises Institute.