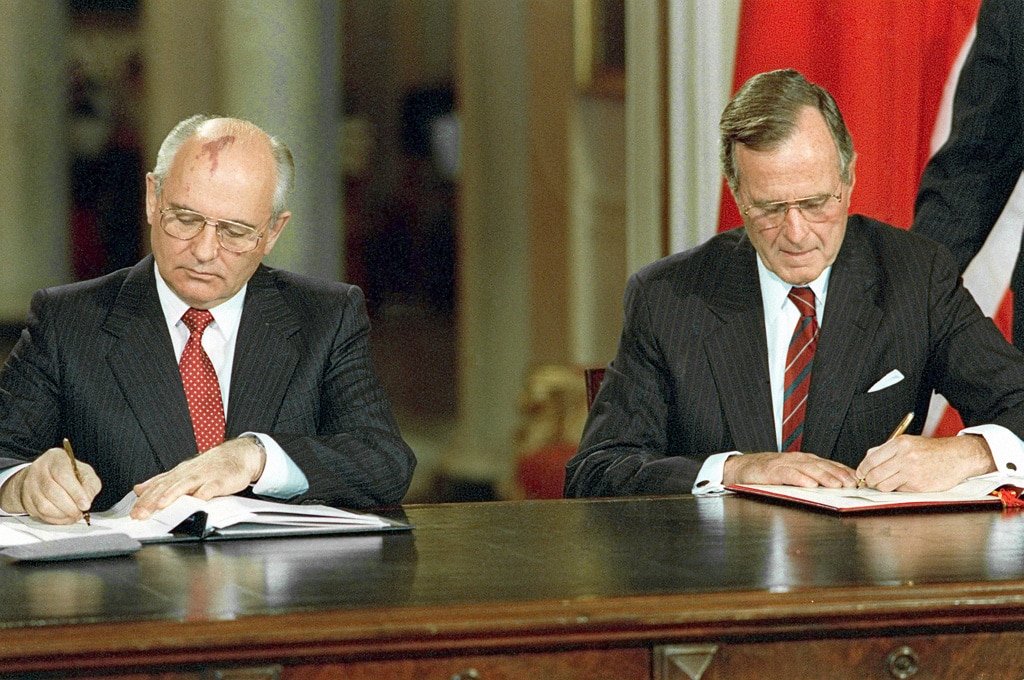 By now, it should be abundantly clear to all that the official U.S. regime narrative on Ukraine is that one is supposed to be in favor of Ukrainian political independence. That is, we’re supposed to support the idea that Ukraine is a separate state that is politically independent from the Russian state. By extension, of course, the idea that Ukraine is a sovereign state also implies it is separate from all other states as well.

But how did Ukraine get that way? States, of course, don’t appear out of nowhere. They generally come into being through one of two ways, or a combination of both. States can be formed out of two or more smaller states through a process of conquest or voluntary union. And states can result when a part of a state secedes to form its own state.

In the case of Ukraine, it is a state that was created out of a piece of the Soviet Union thirty years ago. This occurred via secession. Indeed, Ukraine was part of a remarkable trend toward decentralization and secession that occurred in the early 1990s. These secession movements, of course, were opposed by the “legitimate” central government in place at the time.

Put another way, to “stand with Ukraine” today is to “stand with secession.” But don’t expect to hear it phrased this way on MSNBC or at the New York Times. No, the “s word” is still a no-no in political discourse in America. Also a no-no is to advocate for the process that brought about Ukrainian secession: to hold an election—against the central government’s wishes—as to whether a region will secede.

The Ukrainians did that, and today we’re supposed to cheer that and accept that election’s outcome. Many American pundits even believe it’s worth fighting a war over. But to suggest something similar for a region of the United States? Well, we’re told that’s just plain wrong.

Ukraine Formed Out of Secession

The modern Ukrainian state was necessarily born out of secession because the Ukrainian state was not always separate nor sovereign. The history of Ukraine is a long history of various territories and polities that were, over time, incorporated into the Russian Empire beginning in the seventeenth century. What we now know as Ukraine more or less only came into being in the late nineteenth century. But then it was subject to the Russian czar and (later) to the Soviet Communists. Consolidated, sovereign Ukraine came into being only in December 1991, when a referendum was held and a majority of the voters voted for independence.

Ukraine soon after enjoyed both de facto and de jure independence because the Soviet State was too weak to do anything about it. Ukraine was not alone. By late 1991, the Baltic states had already declared independence, in moves that were opposed by the Soviet state and deemed illegal. A total of fifteen new states were carved out of the Soviet Union during this time. Secessionism extended beyond even the USSR, with Slovenia declaring independence from Yugoslavia in 1991. In 1993, Czechs and Slovakians both seceded from their state, dissolving Czechoslovakia altogether.

It is instructive to note that the United States regime and American pundits generally opposed these secession movements. Washington was late to recognize and accept the independence of the Baltic states. This was in spite of the fact the U.S. had never even officially recognized the Soviet Union’s annexation of the states after the Second World War.

George H.W. Bush even scolded Ukrainian secessionists for their pursuit of independence, mere months before Ukraine finally declared the separation. At the time, Murray Rothbard, following the antisecessionist American impulses, noted that the New York Times portrayed the dissolution of Czechoslovakia as a matter worthy of “regret,” while “establishment opinion” in the United States clearly insisted Slovenian independence was an affront to the “territorial integrity” of Yugoslavia.

The American position throughout all this, perhaps predictably, was that a state’s borders—whether the Soviet Union, Czechoslovakia, or any other state—are somehow sacrosanct and must not be changed, abolished, or otherwise disrespected.

Yet, within a single generation, the US regime has gone from supporting the Soviet state in opposing secession to guaranteeing military defense—through NATO (the North Atlantic Treaty Organization)—to the secessionist Baltic states.

Why Secession Is OK for Ukrainians but Not for Americans

Don’t expect any of this to convert the typical American pundit into a secessionist. American elites have long held to a double standard on secession. They support secession for Africans, for Indians, for Pakistanis and other residents of states whose secession movements are categorized as “decolonization.” Most of the world did, and this is why the number of nation states doubled after the Second World War. Secession has been widespread over the past century. Indeed, the United States regime has supported literally dozens of secession movements in the name of national liberation. Similarly, we can expect the same double standard employed in the case of Ukraine. It will sound something like this: “secession is fine for Ukraine because the USSR was not a democracy at the time. Secession isn’t allowed where people are allowed to vote.”

There is a problem with this version of events, however. The first is that the USSR was rapidly moving toward becoming what the West would categorize as a democracy. Gorbachev already pushing through reforms that would reorganize the USSR into a democratic state that would likely have met the approval of Western elites. The U.S. supported this process and it is partly for this reason that the US opposed Ukrainian independence. The U.S. wanted Ukraine—and also the Baltics—to remain within an enormous post-Soviet state that would have endured. This democratic reform did, in fact, occur in Russia which prior to the days of anti-Putin paranoia was called a democracy by the West.

(Another claim that holds no water is the claim that post-Soviet states—but not U.S. regions—are allowed to secede because they were annexed against their will to the Russian empire. Of course, if unilateral annexation is the criterion, then California, Nevada, New Mexico, Arizona, half of Colorado, and Utah are all entitled to secede by the same standards as any region of the old Russian Empire. We might also mention countless Indian territories—and Francophone territories—that were annexed and governed against the will of the local inhabitants.)

But even if they were allowed a vote, the Ukrainians understood what antisecessionist Americans refuse to admit: cultural minority groups that are out of favor with the central government’s elites have a better chance at true self-determination through secession rather than unity and democracy. Although Ukraine was the most important non-Russian component of the USSR it was nonetheless in the minority. At the time, Ukrainian separatists believed Russian ethnics would dominate democratic politics within a post-Soviet democracy. They were probably right.

So, democracy doesn’t solve the problems that only secession and radical decentralization can solve. Ukraine is just one example of this, although we can be sure that the American regime and its pundit allies will deny any lessons about secession can be learned here.

Nonetheless, for those of us who do recognize the value of secession, the next time we encounter an American who tells us he “stands with Ukraine” we should be sure and tell him it’s always nice to meet a fellow secessionist.