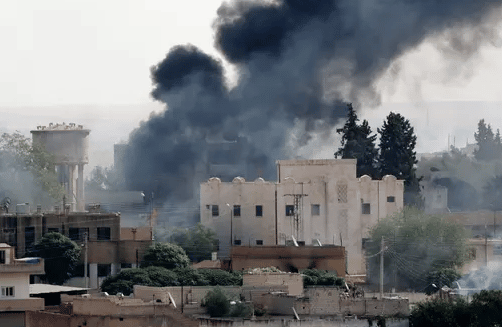 Syrian ground troops moving north to confront invading Turkish forces is related to a deal that was reached by the Kurdish SDF and the Assad government, in talks brokered by Russia and held on a Russian air base.

The deal sees the Kurds unilaterally handing over two important cities, Kobane and Manbij, both in the Aleppo Province, to the central government to rule. This means Turkey’s invasion of those cities would be a direct invasion of Syrian cities under government control. Those two cities are also where Syria’s Army is heading first. This would make Turkey attacking those cities more controversial, and also raises the possibility of Russia intervening on the government’s behalf.

Kobane is a Kurdish-dominated city on the immediate border with Turkey. It was repeatedly contested by ISIS during the war, and would likely be an early target as Turkey’s troops fan out in the 30 km safe zone. Manbij, an Arab-majority city seized from ISIS in a US-backed offensive, is about 30 km from the border, but would clearly be a prize Turkey’s Arab rebel allies would covet.

While the terms of an overall deal are not publicly known, superficially the plan seems to be for Syria’s military to assume defense of the western-most territory of what Turkey is attacking, freeing up more Kurdish fighters to resist the offensives further to the east.

Syria had initially expressed an aversion to talking with the Kurdish SDF at all, calling them separatists and “agents of Washington” because of their long-time ties with the US. It’s not clear that’s entirely warranted, as the Kurdish political leadership had long envisioned a post-war solution with semi-autonomy within a federalized Syria. Russia, who had advocated a federal system post-war, clearly wanted to get these two sides together.

The Syrian government never agreed to Kurdish autonomy, and it is speculated that this deal might spell at least a partial end to that. In the near-term, however, both sides are more worried about slowing a Turkish invasion than about running day-to-day operations across eastern Syria.