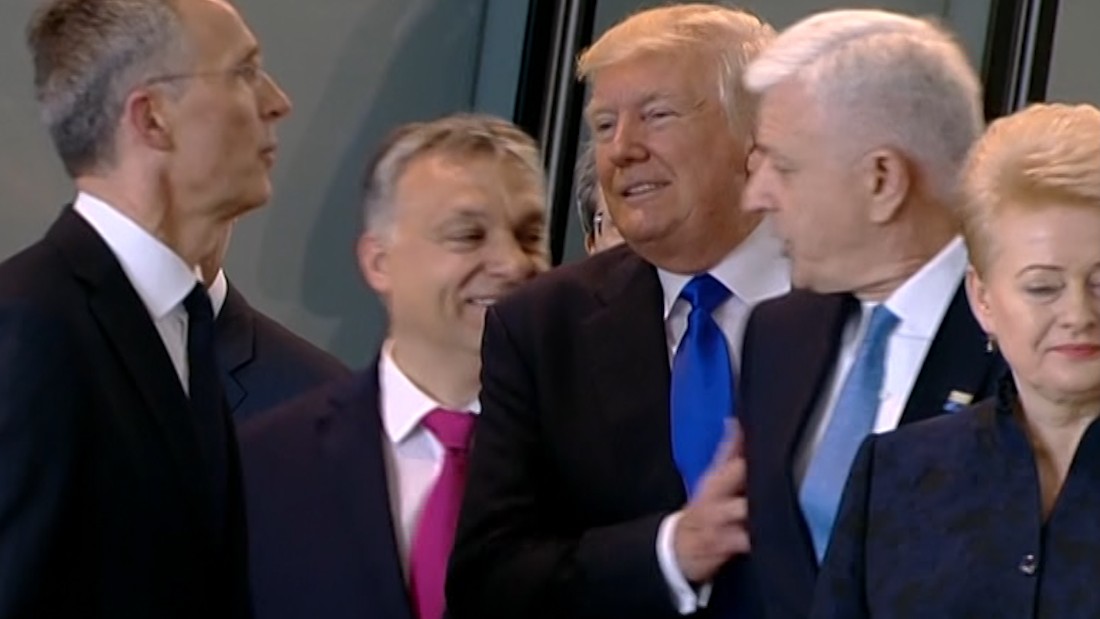 I’ve got a few leftover thoughts about Donald Trump’s trip to Europe. (Here’s what I said about the Middle East portion.) As usual, I oppose both Trump and his mainstream critics. It’s possible for both sides to be wrong in a dispute.

First, trade. Trump famously said to Jean-Claude Juncker, the president of the European Union, “The Germans are bad, very bad. Look at the millions of cars that they’re selling in the USA. Horrible. We’re gonna stop that.”

I’m hoping that Trump is a demagogue who really knows better, because I can’t believe that anyone could be so ignorant or unintelligent as to think that selling cars to Americans is evidence of badness. I never dreamed that someone who offered me high-quality products was trying to harm me. (He also says Chinese exporters “rape” us.) It’s not just basic economics he’d have to be ignorant of. He’d also have to be clueless that German automakers have built cars in the United States for quite a while (the VW Passat, BMW X Series, Mercedes-Benz C-Class), most of them for export, at least BMW’s case.

But even if they weren’t building them here, who cares? It’s been 241 years since Adam Smith showed that the wealth of nations (i.e., collections of individuals) equals access to products that make life better. “The division of labor” — one of the short list of things that make common people wealthy — “is limited by the extent of the market,” Smith wrote. Global trade extends the market as far as possible — until intergalactic trade becomes feasible. It’s been only slightly less time since David Ricardo spelled out the principle of comparative advantage, which further elaborated on the source of the gains from trade. (Spoiler alert: we prosper because of our differences, so we shouldn’t want the government to “level the playing field.”)

The Wharton School surely covered those matters. Was Trump too busy giving freshmen swirlies to attend class? (Evidence for Trump’s demagogy rather than ignorance is that his hotel rooms are appointed almost entirely with imported products.)

Trump tweeted on his return from overseas, “We have a MASSIVE trade deficit with Germany…. Very bad for U.S. This will change.”

But also found in Smith’s The Wealth of Nations is this: “Nothing … can be more absurd than this whole doctrine of the balance of trade.” Trump apparently does not know that the United States has run so-called deficits in good times and so-called surpluses in bad times, such as during the Great Depression.

Come on, someone with a brain as good as Trump says his is must realize that any “deficit” in the merchandise account is a mirror image of a “surplus” in the capital account. By construction, all such accounts taken together must balance.

When foreigners receive dollars for their exports to America, they have three options for how to use the money: buy American exports, invest here, or trade them to someone else who then faces the same options. They can’t spend them at home, just as you can’t spend euros at Kroger. Why does Trump want foreigners to buy American products rather than invest here? Investment improves our lives by creating new and better products. If we don’t like that foreigners by Treasury bonds, i.e., lend money to the government, there’s an easy and obvious solution: the government can stop borrowing.

On top of everything else, Trump either does not understand or does not care that a 35 percent tariff on German cars would be a tax on Americans — and not just buyers of German cars.

One more thing on trade. It’s bad enough that Trump spouts such rubbish. But when his National Economic Council director, Gary Cohn, claims that Belgium’s trade policies are better than Germany’s, we have to wonder what the hell is going on. Under the EU, both countries’ have the same trade policies. Does he not know what Brexit was about?

Now NATO. Trump has learned nothing over the past year. He admits that when, during his campaign, he declared NATO obsolete, he knew nothing about it. He still knows nothing. I’m not saying NATO is a good thing. It’s not. I’m saying rather that Trump’s cluelessness is no help whatever in making the case against NATO and all such alliances. He’s a liability to the anti-NATO argument.

Trump, in keeping with his absurd aggrieved-America shtick, would have us believe that western Europe free-rides off the American taxpayers. The taxpayers are indeed victimized, but the victimizer is Amerca’s ruling elite and its bipartisan imperial foreign policy. NATO was never about protecting western Europe. Rather, it had — and still has — two other purposes: first, to give a multilateral mantle to essentially unilateral U.S. imperial actions; and second, to prevent other countries from forging their own peaceful bilateral relations with, previously, the Soviet Union and now Russia. America’s ruling elite, driven by geopolitical and economic ambition, would not — and does not now — tolerate what it calls “nonalignment.” You are either with us or against us. Otherwise, where would that leave “American leadership”? What would become of the “indispensable nation” and “American exceptionalism”? A bogeyman was/is necessary to justify American world leadership, and Russia fills the bill as the old Soviet Union once did. (Iran and ISIS can’t compare.)

Thus western Europe has been a tool of American machinations, not an ungrateful beneficiary of American self-sacrificial defense. Does anyone seriously believe that the crushing and increasing burden of the national-security apparatus would lighten if European taxpayers were forced to spend more on their militaries?