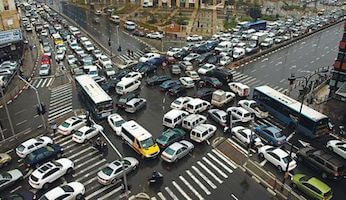 The seemingly unprecedented mean-spiritedness of politics these days drives some people to think that ideology is the problem. To distinguish themselves from those whom they blame for the toxic atmosphere, some pundits declare themselves “above ideology,” even anti-ideology. In effect they say, self-righteously: “In contrast to those ‘extremists’ (that is, the ideologues) I judge each issue case by case by its own merits. I’m a pragmatist.” This is intended to display open-mindedness and a willingness to cooperate with those they disagree with. Cooperation is held to be a virtuous end in itself as long as it is presented as a pursuit of “good government.”

That may be an understandable reaction to unpleasant shouting and name-calling, but it’s nonetheless a mistake. No one can escape ideology, and actions taken in the name of avoiding ideology may have unintended, though not unforeseeable, bad consequences for society.

Googling the word ideology brings this definition: “a system of ideas and ideals, especially one which forms the basis of economic or political theory and policy.” Ideology, then, is a subset of philosophy that addresses a combination of ethics and politics; it denotes a person’s sense of right and wrong interpersonally, particularly regarding a matter of paramount importance: when the state may use force against persons whom it has no reason to believe have aggressed against others.

It’s been said that everyone has a philosophy whether he knows it or not. The only question is whether that philosophy is explicit or implicit, accepted with care or in a slipshod way. The same can be said of ideology. It’s an obligation of responsible adulthood to be clear with oneself about how one makes political decisions. But one way or another, everyone has a method of doing so.

This becomes apparent as soon as one examines what it would mean to judge each issue on its own merits case by case. Can we even make sense of that procedure? After all, what are merits, and how does one recognize them when considering a concrete issue?

Look at it in a nonpolitical context. I am walking down a street full of people. Should I steal that person’s wallet? No? Why not, and if not, how about that person over there? Is the decision arbitrary? How could it be? I must have some reason for robbing only some people (say, the ones who appear too weak to resist) or no one at all — ever.

People seem to realize this. Despite what they may say, they judge individual cases not “on their own merit” but according to an explicit or implicit measuring stick. We call that having principles. Having principles that transcend individual cases is contrary to judging situations case by case. It requires that one inquire whether, by some standard or other, a given case is significantly like other cases. Some people might think they don’t do that, but they’re mistaken. It would be impossible to face every situation as though it were unique without context and unrelated to anything else one has experienced or is otherwise familiar with.

Of course people are capable of suspending their typical principles in a given case; nothing is easier than rationalization. But that simply indicates that their implicit principles allow for the suspension. That license to suspend, which must contain an indicator for when the suspension is appropriate, is also part of their implicit or explicit philosophy.

Turning to politics, if a person thinks that in some cases state action is good, that implies a view of the state and the nature of its relationship to people, however vague that may be. That’s an ideology.

The problem isn’t ideology in itself but the merits or lack thereof of any given ideology. We judge ideologies according to our moral principles, which themselves may be explicit or implicit. That’s also true of people who claim to rely on their feelings, which also are based on earlier accepted philosophical judgments, again, explicit or implicit.

The anti-ideologues often fault ideologues for refusing to compromise. This rankles them because they subscribe to the view that politics is the art of compromise. But a willingness to compromise is not an unconditional virtue. It all depends on what we’re talking about. Ayn Rand put it well:

It is only in regard to concretes or particulars, implementing a mutually accepted basic principle, that one may compromise. For instance, one may bargain with a buyer over the price one wants to receive for one’s product, and agree on a sum somewhere between one’s demand and his offer. The mutually accepted basic principle, in such case, is the principle of trade, namely: that the buyer must pay the seller for his product. But if one wanted to be paid and the alleged buyer wanted to obtain one’s product for nothing, no compromise, agreement or discussion would be possible, only the total surrender of one or the other.

There can be no compromise between a property owner and a burglar; offering the burglar a single teaspoon of one’s silverware would not be a compromise, but a total surrender—the recognition of his right to one’s property.

Things are the same in the political context. Everything the government does requires the use of force against innocent people if for no other reason than that government gets its money through taxation, the politicians’ method of extortion. (Try telling the taxman you’d rather not pay this year.) An alleged compromise between someone who favors a particular tax or regulation and someone who opposes it is not really a compromise at all. The principle of countenancing legal extortion and regulation of peaceful conduct either wins or loses. There is no in-between.

Much of the partisan and doctrinal rancor we see in politics is really just squabbling among people who share basic pro-plunder, pro-regulation principles. They merely argue over how the money should be used and whose conduct should be regulated. In many matters — foreign policy and domestic surveillance, for example — they don’t disagree at all.

But occasionally the contenders might represent contrary basic principles. So it’s understandable that they would refuse to compromise. Some things can’t be compromised. The problem here is the blunt instrument of the state, the tool that allows one group to impose burdens on others.

Finally, the anti-ideologues claim to admire those known as “centrists” because they purportedly work together in the spirit of cooperation, thereby delivering what they all call “good government.” As suggested above, such politicians are merely people who all share the same malign fundamental premises about the government, but since resources are limited relative to the politicians’ appetites, the centrists have to compromise on how to use them. They prefer getting something through cooperation rather than nothing through gridlock. They, in the favorite words of the anti-ideologues, “get things done.”

But is it really the case that centrists deliver good government? A few moments spent thinking about what the centrists have delivered decade after decade will answer the question. It is the bipartisan centrists who have routinely delivered foreign intervention, war, a humongous national debt, outrageous budget deficits, inflation, recession, mass domestic surveillance, the insidious prohibition of vice, and so much other bad stuff. Indeed, the centrists even gave us the Donald Trump, who won enough votes precisely because he crudely opposed the “adult” centrists who have been in charge and have messed things up so badly. If that’s not a damning indictment of centrism, I don’t know what is.

That leaves the question of what to do? As we’ve seen, bipartisanship screws the people, while hyperpartisanship pollutes the air. We do have an alternative: liberty. Let’s increasingly limit power while working to abolish it — leaving individuals free to arrange their own affairs in peaceful cooperation with others. It’s called the free market, or voluntary sector, and it encompasses so much more than commercial transactions. (See my “Disagreement without Conflict.”)

If power were unavailable to those who seek to impose burdens on other people, one source of public rancor would disappear. Live and let live would be realized.