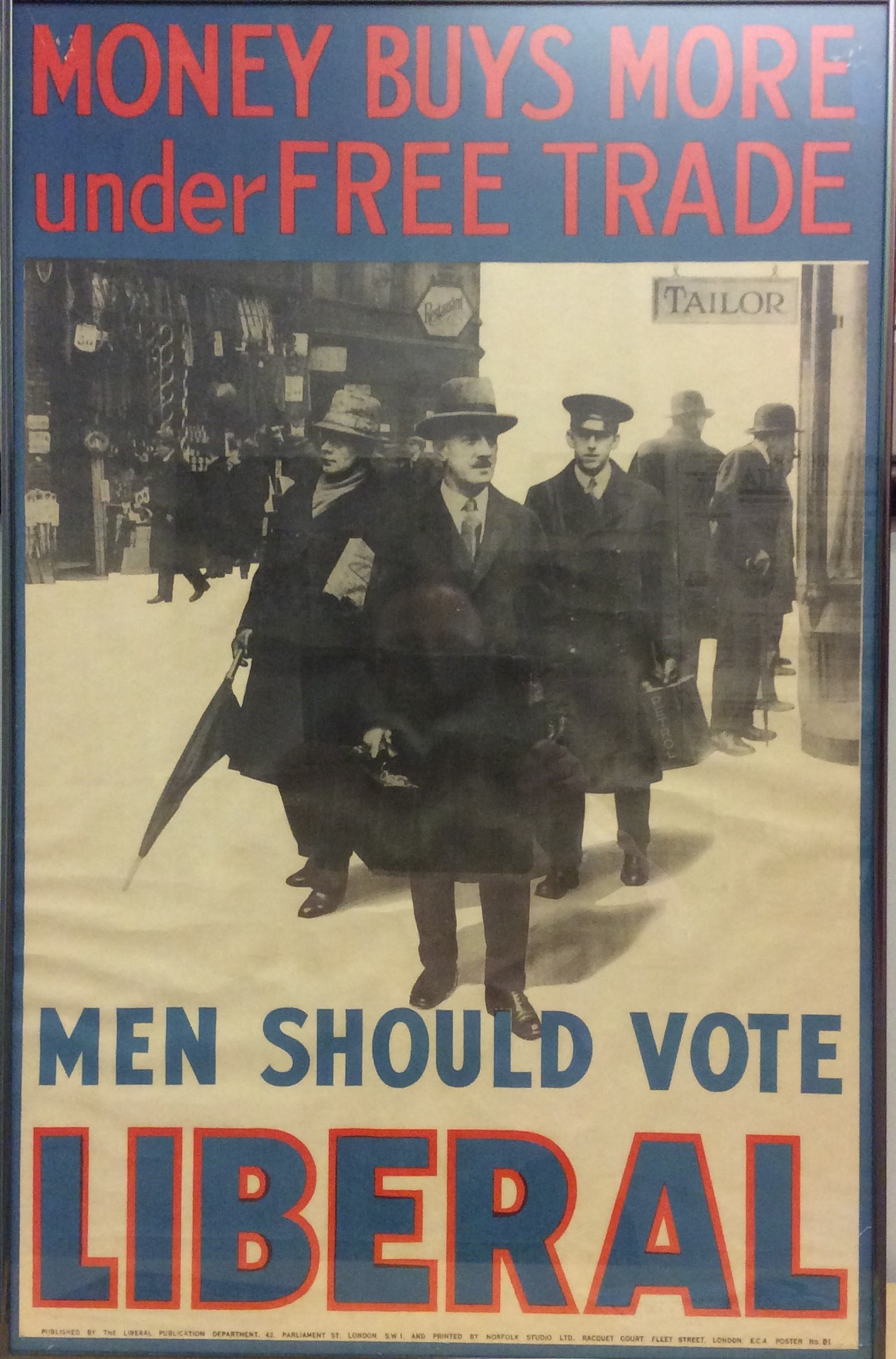 “What protection teaches us, is to do to ourselves in time of peace what enemies seek to do to us in time of war.” –Henry George

When Donald Trump can propose tariffs on imported steel, aluminum, washing machines, and solar-panels without being roundly booed off the stage, one has to wonder if reason has any power to win the day. Is this truly a democracy of dunces?

Trade is really not that complicated. Kids do it every day, and they know what they’re doing. But something happens when they grow up. Most people never grasp the most basic economics. They harbor what Bryan Caplan calls an anti-market bias. This seems in conflict with Adam Smith’s famous “propensity to truck, barter, and exchange one thing for another,” but that might just mean that people’s explicit notions conflict with their implicit, unacknowledged guide to everyday activities. They also rarely hear anyone make the clear principled case for free trade. Almost everyone in public life is a protectionist to some extent. Even those who lean toward free trade talk as though countries — rather than individuals — trade. Hence their favorable reception of government trade agreements. Once you buy into that sort of collectivism, you are bound for trouble. (Gary Johnson was no help at all in the 2016 campaign. Merely declaring yourself and your running mate “the free traders in the race” — without explanation — teaches no one anything.)

Beyond that, most people have no incentive to explicitly cultivate the economic way of thinking. Each person’s one vote amounts to squat, so voters have no incentive to acquire the tools with which to judge political candidates, who as officeholders have a lot to say about economic matters, e.g., imports, taxation, and regulation.

Still, Americans trade every day with others, so they implicitly “know” why trade is good and why restriction is bad. They like variety, choice, and bargains. Yes, they are nationalists, so they think differently about trade the moment goods and money cross a national boundary. They see virtue in buying “American,” even if “American” means many foreign factors of production. Nevertheless, when they shop, most of the time they act like free traders.

But come on! Even with these headwinds, we free traders — we advocates of the liberty — ought to have prevailed. “Money buys more under free trade,” goes an old British Liberal Party slogan. Why isn’t that persuasive? Perhaps it’s because people don’t ever hear it said. Perhaps it’s too logical, too simple.

“Trade wars are good,” Trump says with characteristic aplomb, “and easy to win.” Well, presidents always think about wars, trade or otherwise, that way. After all, they aren’t on the front lines. (I think of the line attributed to Bastiat: “When goods don’t cross borders, soldiers will.”) With trade wars the front lines are populated by consumers who face higher prices and the industrious folks who want to export their products but can’t or who use now-higher priced imported materials and machines. They get hurt, but most people, being economic illiterates, won’t know it’s the trade restrictors who have inflicted the casualties. In other words, they overlook “what is not seen,” as Bastiat would put it. So Trump will get off scot-free. True, some writers will identify the true culprit — George W. Bush and Barack Obama have been faulted for their steel and tire tariffs — but who reads those writers besides those who already understand? We’re all prone to confirmation bias.

Anyway, here’s the important stuff to keep in mind.

*We live in a world of scarcity, which means we constantly have to make choices and face trade-offs. Time, energy, labor, and resources used in one way cannot be used in another. Therefore, if the government puts its thumb on the scale for one industry or firm, other industries and firms will be unable to obtain the resources and labor services they need to serve consumers, who will have less money after paying higher prices to buy other things.

*We work to live, not vice versa. It shouldn’t take an Adam Smith to recognize that the purpose of production is consumption.

*Individuals, not nations, trade. Remind yourself of this truism and many fallacies melt away. I have no conflict of interest with Chinese or Canadian steelmakers or other foreign producers. On the contrary, we have a harmony of interests.

*Trade is positive-sum, not, as Trump emotes, negative sum. At the moment of an exchange, both parties expect to benefit and can do so — or else they would not trade. (One or both may later decide they’ve made a mistake, but that this irrelevant.)

*Exports pay for imports. The “wealth of nations” does not consist of cash. It consists of access to goods and services. We want what money can buy. But we have to give something up to get what we want. If we didn’t want to buy, we would not need to sell. It would be nice if we could get things without having to give up anything, but everyone is in the same boat, so that is not to be.

*”Trade deficits” are not bad. Who cares if in the aggregate the individuals who comprise Group A buy more from the individuals who comprise Group B than the individuals in Group B buy in the aggregate from the individuals Group A? A “trade deficit” will simply be the counterpart to a capital-investment account surplus. Foreigners can’t spend dollars at home, so exporters have essentially two choices about how to use their dollars: buy American-made goods or invest in the United States. (Trump and his team of restrictionists want foreigners to both buy American exports and invest in the United States, but you can’t spend a dollar more than once.) Here is where the typical trade restrictionist shows his lack of discernment: he will start talking about government budget deficits. Now it is true that government debt is one of the things foreign holders of dollars can invest in. But here’s the thing: they couldn’t do it if the U.S. government weren’t running deficits! Balance the budget (after at least drastically shrinking it) and that problem disappears. It’s completely under the politicians’ control. Let’s stop scapegoating China for buying federal debt instruments.

*Finally, you cannot advocate trade restrictions without also advocating state-bestowed privilege. So if you are offended by privilege, you must oppose all trade restrictions. Restricting trade on behalf of a relatively few steelworkers and firms must — must — privilege them over the vast majority of American workers and firms and all consumers. It cannot be otherwise. A few jobs are saved — and in this age of robotics, I do mean a few — at the expense of the many. Why should those few get special government treatment? That question has to be answered before anything else.

When I raise this point with interlocutors, I often hear this comeback: So protect everyone! In other words, since restrictions (taxes) on steel and aluminum imports harm makers and exporters of, for example, autos, airplanes, and spare parts, all we have to do is protect them against their competition. The logic is that all firms and workers should have their foreign competitors hobbled. Then all will be fine. Will it?

Um, no, it won’t be. To see why, imagine that the government built an effective real wall against all foreign goods with summary execution of smugglers. No producer would have to worry about foreign competition. Would we all really be better off? Of course not; we’d all be poorer. Specialization and the division of labor — let’s call it social cooperation — make everyone richer. But, as Adam Smith famously noted, “the division of labor is limited by the extent of the market.” The smaller the market, the less refined the division, the result being fewer goods, more expensive goods, and inferior goods compared to what we’d otherwise in a larger trading area. You can see this by envisioning life in a city that did not permit any outside products (imports): the residents could buy only what someone in that city could make. Sound good to you?

Any constriction of the market area is a move toward literal self-sufficiency, and nothing would guarantee poverty like self-sufficiency. (See Bastiat’s Economic Harmonies for details.) And don’t forget: every producer is also a consumer.

Money buys more under free trade, dammit, and that means new opportunities for people in their role as producers.

The “protect everyone” solution, which should appall anyone who opposes big government, also overlooks what the price system does: it guides (not allocates) resources and labor toward what consumers want most. Remember, at any given time, we can’t have it all (although in time, technology moves us in that direction). When the government restricts trade, it distorts prices and messes up this sensitive guidance system. Someone explain how such disruption and the resulting destruction of wealth make for national security. Moreover, trade wars can become shooting wars. Heaven save from a president emboldened by a belief that the country is economically self-sufficient. (For a debunking of the national-security argument for trade restriction, see this and this.)

And what makes anyone think politicians, bureaucrats, and their appointed “experts” know better how labor and resources should be used? Don’t say those public servants will seek to emulate the market. Why emulate it when we can have the real thing?

So trade restrictionists: stop telling yourself and others that your policies will benefit “the country” — that you’re putting “America First” — because all they would do is (temporarily) benefit a select, well-connected few at the expense of everyone else. The truth doesn’t sound nearly as noble.

END_OF_DOCUMENT_TOKEN_TO_BE_REPLACED

Military Honor, the Virtue and the Curse

Honor is a powerful idea. Those who live by it take it seriously. It is not will, courage, or even valor, though it does demand such things. It is the code that exists within, demanding one to do what is right, regardless of risk or reward. Honor for is paramount to...