The Constitution, War Powers, Congress, and the American Military: A Study of Betrayal

The Constitution, War Powers, Congress, and the American Military: A Study of Betrayal 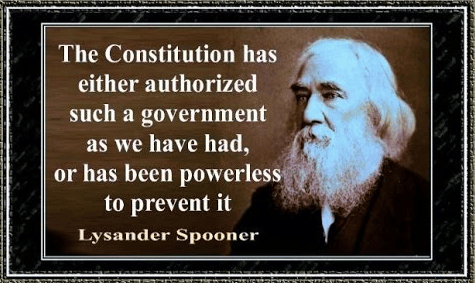 Any conversation about American liberty should begin and end with the false notion that the United States Constitution was written for the purpose of protecting that liberty. The opposite of course is true. This was a document in the form of a contract written by powerful men in secret, in the dark of night, and behind closed and locked doors. It was never signed by any others than those drafting this tyrannical set of rules, and was never agreed to by anyone. It was politically motivated, and used to set up a federal system with extreme centralized power, which had little restriction by any state or individual. This is a worthless document that is revered by many due to what seems to be a brainwashing technique that causes a limitation of intellect.

The great Lysander Spooner said: “But whether the Constitution really be one thing, or another, this much is certain – that it has either authorized such a government as we have had, or has been powerless to prevent it. In either case, it is unfit to exist.”  In addition, he said: “The Constitution has no inherent authority or obligation. It has no authority or obligation at all, unless as a contract between man and man. And it does not so much as even purport to be a contract between persons now existing.” It certainly is not fit to exist, and remember that it was written and implemented 244 years ago, and no citizen has ever in history signed this contract.

Spooner’s statements are correct, but do not go far enough in denouncing even the idea of such nonsensical trickery. The very thought that man’s natural rights can be protected by a document drafted by politicians is absurd, and given that this document can be amended at any time by government, even the pretense of freedom is lost. The people can only have a say in the decision-making by a majority selection of proxies through a forced participation in the corrupt voting process. A piece of parchment allowing almost unlimited powers to those in government by mob rule is not only worthless as the “law of the land,” but is in fact a direct assault on the freedoms of any who do not voluntarily agree by physical contract to accept it.

In current times, what is heard ad nauseum, are silly pronouncements by so-called “representatives of the people,” and pompous asses in the media that something is unconstitutional, but what does this even mean? Considering the convoluted and vague language, the massive powers given to government, and the fact that appointed agents of the very politicians that abuse it interpret it, there is not even any semblance of honesty present. Add the ever-increasing tyrannical powers now claimed by the executive branch, and the entirety of this constitutional process is nothing more than a farce. But then, was this not always the case?

In today’s news, given the brutal and murderous wars and assassinations taking place at the hands of the U.S. war machine, the Congress is voting on its own war powers, powers already in place. Interestingly, the Constitution states that only Congress can declare war, so that same body voting on resolutions that are already solidified in their precious constitution is absolutely asinine. This is simply an exercise of flatulence done in order to appease the hapless proletariat, and create an image of responsibility where none exists. This is telling in that the terroristic U.S has been warring aggressively against innocents for over 93% of its existence, and Congress has not authorized any war in the past 79 years. Too little too late is an absurd understatement, as Congress has been complicit in all wars of aggression since the beginning, whether a declaration was evident or not.

But one thing should be clarified here because many of those that claim to be champions of the Constitution, and who also claim to speak for the protection of freedom, simply calls for Congress to declare war so that all is legitimate and moral. That has not, and could never be the single legitimate reason to prosecute war. In fact, no war in the history of the U.S. has been warranted, with the possible exception of the beginning of the Revolutionary War, and the South’s defense of its independence. So Congress giving a green light to slaughter those in other lands, something they have done in the past, would be nothing less than a murderous war crime. Unless the actual defense of this homeland due to an outright military attack is evident, no war should ever be waged. Congress has never actually represented the people in this situation; it only represents itself and those in the ruling class. The mere thought that a small group of elected trimmers could represent the interests of hundreds of millions is mindboggling. Only a few select individuals and groups would ever be represented, meaning that all other’s rights would be negated.

This leads us to the agents of state force in the military that are directly controlled by the political class. This same political class is controlled by the elite cadre of central bankers, other banking cartels, and corporatists, those that make up what is referred to as the military industrial complex. These are the profiteers of war that use their pawns in politics, mainly those in the Executive Branch and Congress, to continue to grow this murderous empire so as to sustain this powerful fascist oligarchy.

The reverence for this military machine, a machine responsible for the total destruction of many entire countries, for the maiming, displacement, and deaths of tens of millions of innocent men, women, and children across the planet, is almost universal. This alone is reason for absolute contempt for this governing system created not for liberty, but for tyranny.

The betrayal of the American public has been relentless and ever present. This betrayal while seemingly obvious, has continued to strengthen throughout our history, and today continues with such arrogance and force that the final destruction of liberty seems close at hand. This is happening currently at an accelerated pace, and with little resistance. Continued blind obedience by the masses to a nation state based on lies is a most pathetic state of affairs, and one that can only lead to despair.

In order to face betrayal in life, acceptance of the truth of that betrayal is necessary. Until the general population accepts the truth, and decides to fight back against the ruling class and its government pawns, the risk of losing everything will remain in place. None should ever accept the ridiculous notion that a few chosen from a crowd of fools should rule over the rest under the guise of “representative” government. The mere idea of this is one that can only marginalize the individual in favor of the collective, and therefore destroy all sovereignty of the people at large.

“The state is the coldest of all cold monsters. Coldly it lies, too; and this lie creeps from its mouth: `I, the state, am the people.’… Everything about it is false; it bites with stolen teeth. ” ~ Friedrich Nietzsche – “Thus Spake Zarathustra“