The Feds Are Coming for Libertarians

The Feds Are Coming for Libertarians 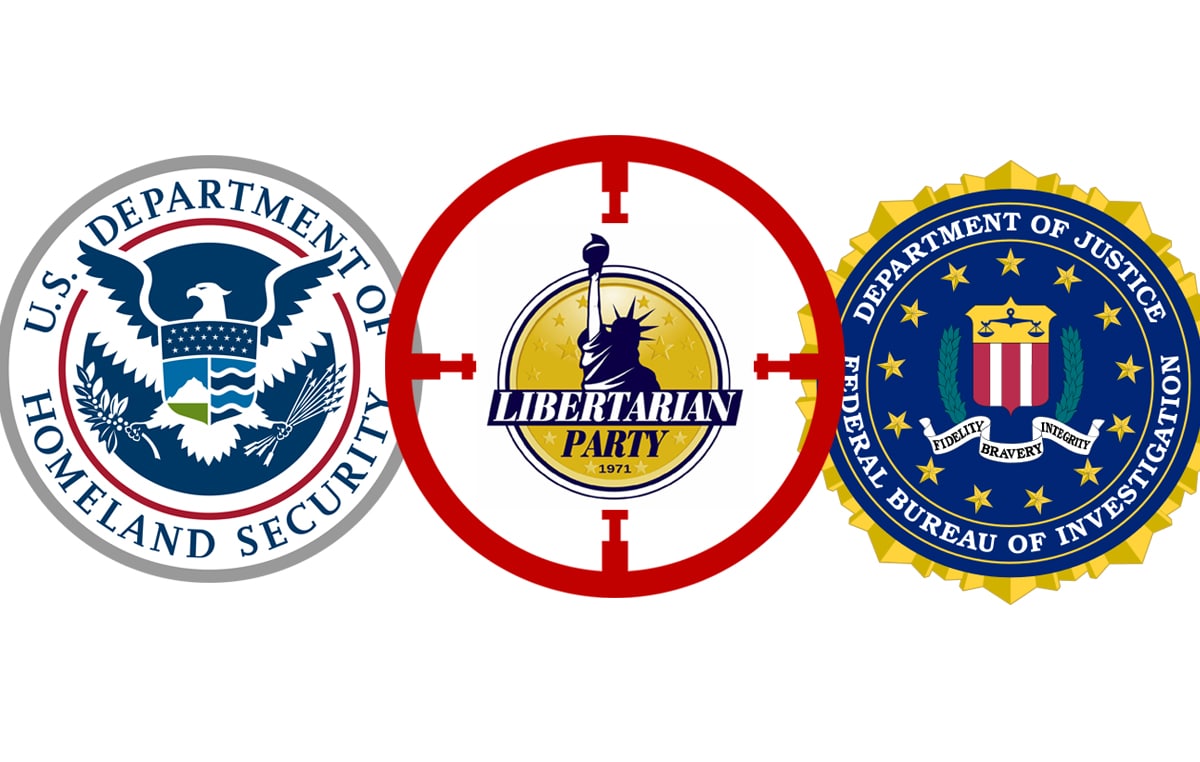 On the day that Joe Biden was inaugurated as president, former CIA chief John Brennan announced on television that federal intelligence agencies “are moving in laser-like fashion to try to uncover as much as they can about” various suspect groups, specifically mentioning libertarians.

Libertarians are in the federal crosshairs. Six or seven years ago, there was a lot of prattle about how “the libertarian moment has arrived.” I always knew that was hokum. Since then, there has been a huge increase in hostility to libertarians in Washington DC and elsewhere around the country.

Many libertarians assume they have nothing to fear because they are not engaged in seeking to violently overthrow the government. But the feds will be able to find many other pretexts to target peaceful citizens with supposedly subversive ideas.  Federal law already defines “domestic terrorism” far more broadly than most people realize. As the Oregonian recently noted, “Cases categorized as domestic terrorism include allegations of…knowingly entering or remaining in any restricted [government] building or grounds…civil disorders and making threatening communications.” FBI chief Christopher Wray told a Senate Committee that the FBI has 2,000 ongoing domestic terrorism investigations. Wray recognizes the terrorist peril as the ticket to a bigger budget: “We need more agents; we need more analysts.”

The Biden administration is itching for a broad new domestic terrorism law to enable even more crackdowns. Libertarians need to recognize how that definition of terrorism has already mushroomed. Capitol Police acting chief Yogananda Pittman, testifying to Congress, described the January 6 clash at the Capitol as “a terrorist attack by tens of thousands of insurrectionists.” Apparently, anyone who tromped from Trump’s raging speech to the Capitol that day was a terrorist, or at least an “insurrectionist” (“terrorist” spelled with more letters?).

Another codeword for who the feds will target is “extremists.” The Washington Post in January portrayed “domestic extremists” as “a disease that seems to have taken hold in the nation’s nervous system.” Last fall, FBI boss Wray told Congress that among the “underlying drivers for domestic violent extremism” are “perceptions of government or law enforcement overreach.” Libertarians are practically defined by their perception of government as overreaching. After the January 6 clash, Wray portrayed more busts as proof of FBI triumphs: “The more of the arrests that you see, well, that’s obviously good news for everybody that we’re arresting people who need to be arrested.”

In the coming years, the feds may treat libertarians like Muslims were treated after 9/11. Any new crackdown on terrorism will turn into a numbers game in which justice and fair play don’t have a snowball’s chance in hell. Between 2001 and 2006, federal prosecutors charged 10 times as many people in terrorism investigations as they convicted on terrorism-related charges. President Bush declared in 2005 that “federal terrorism investigations have resulted in charges against more than 400 suspects, and more than half of those charged have been convicted.” But only 39 people were convicted on crimes tied to terrorism or national security, a Washington Post analysis found.

Entrapment opened the floodgates to federal terrorism indictments. Trevor Aaronson, author of The Terror Factory: Inside the FBI’s Manufactured War on Terrorism, estimated that only about 1 percent of the 500 people charged with international terrorism offenses in the decade after 9/11 were bona fide threats. Thirty times as many were induced by the FBI to behave in ways that prompted their arrest. In 2006, the FBI fabricated a terror scheme by the Liberty City Seven, where an informant encouraged a bunch of dimwits in Florida to babble about blowing up government buildings. That group was so knuckle-headed that they asked the FBI informant for military uniforms and wanted to conduct a parade.

Few Americans recognize how badly the legal playing field is tilted against them. When FBI agents knock on their doors, many Americans won’t hesitate to open up because they assume “those who have nothing to hide have nothing to fear.” But the FBI is exploiting a sweeping law that criminalizes casual comments. Federal agents have the right to lie to you and to put you in prison if you lie to them. Any citizen who makes even a single-word (“no” or “yes”) false utterance to a federal agent faces up to five years in prison and a $250,000 fine.

It gets worse. You don’t have to actually lie. FBI agents can fabricate the sentences they use to hang you. Unlike most law enforcement agencies, the FBI rarely videotapes interviews, thereby permitting agents to create the narrative or “facts” which then can be used to charge individuals with false statements. Instead of a transcript, an FBI agent writes up a memo a day or two later asserting what you said. FBI agents have been taught that subjects of FBI investigations “have forfeited their right to the truth,” which helps explain the vast increase in federal entrapment operations.

If the FBI shows up at your door, they might have already accessed every email and text message you sent in recent years. They may have vacuumed all your social media activity—those private Facebook messages you sent—HA! They may have also accessed all your credit card and other financial data. And the FBI may have already interrogated other people to squeeze out accusations against you that they can throw in your face. Then they launch into a game of 20 questions—with a federal indictment awaiting if they claim you answered untruthfully.

Politicians in Washington don’t see such abuses as a problem; instead, they are a grand opportunity to smite people who don’t kowtow. It wasn’t that long ago—in the final 15 years of J. Edgar Hoover’s reign—that the FBI became America’s thought police. The FBI’s COINTELPRO program conducted thousands of covert operations to incite street warfare between violent groups, to get people fired, to portray innocent people as government informants, to destroy marriages with poison pen letters, and to cripple or destroy leftist, black, white racist, and anti-war organizations. A 1976 Senate report warned, “The American people need to be assured that never again will a federal agency be permitted to conduct a secret war against those citizens it considers threats to the established order.” But legal and administrative restrictions on the FBI evaporated in the post 9/11 panic, resulting in pervasive abuses of Americans’ rights.

The FBI now operates with near-total impunity. The same is true of many state and local police departments who may be hungering for new federal subsidies to crackdown on the extremist peril.

How might this play out in the daily lives of people guilty of entertaining libertarian ideas? Consider Duncan Lemp, a 21-year-old Maryland man who was shot to death in a predawn raid in March 2021 after police smashed in his bedroom window and tossed flash bang grenades into his bedroom. Lemp was active on Twitter and liked several tweets by Libertarian presidential candidate John McAfee. Lemp’s last tweet declared, “The Constitution is dead.” Two months later, so was Lemp.

The Montgomery County, Maryland government later admitted that Lemp was targeted in part because was “anti-government” and “anti-police.” Plus, Lemp was outspoken about his support of the Second Amendment and posted photos of himself with guns on Instagram. Police saw one such photo and concluded that Lemp possessed a semi-automatic rifle that was illegal to own in Maryland. After they killed him and searched the Lemp home, they realized they had mis-identified the firearm—it was legal. But police, prosecutors, and local politicians treated that like a harmless paperwork error: nobody cared about the wrongful killing of Duncan Lemp.

The police case against Lemp also came from accusations from one or more confidential informants. Lemp trusted people who betrayed him to the police, allegedly with false accusations according to Lemp family lawyer, Rene Sandler. A month after Lemp was killed, activists held a protest at Montgomery County Police headquarters. I attended that event as a journalist (the ol’ press pass flopping around my neck) and was chagrined to see how the event went down. Guys in Hawaii-style “Boogaloo” shirts were using bullhorns to scream profanities at cops and were pointlessly blocking a road. One of the most prominent organizers told attendees to bring firearms to the event, despite Maryland law prohibiting firearms at protests. He told people on Facebook to show up with their guns anyhow and just walk around, pretending not to be part of the demonstration. That guy was full of bluster but never showed up for the protest himself. Almost 10% of the 30 protesters were arrested for firearms or other offenses. I later heard that one of the guys suspected of being a police informant against Lemp was at that rally pretending to demand justice for Lemp.

In the coming months and years, many libertarians could be indicted not for violent acts against the government but for unwise or reckless words uttered in proximity to government informants. If you don’t know someone like the back of your hand, then you better be damn careful what you say around them. And even if you know a person well, that doesn’t oblige you to join them in a leap off a legal cliff. Simply because someone spouts anti-government zeal doesn’t make them more trustworthy than a congressman. Claire Wolfe, the author of 101 Things to Do Until the Revolution, wrote an excellent guide to recognizing government informants which she made available for free online.

Simple prudence can suffice to avoid many tripwires. If some new acquaintance wants to provide you a pipe bomb to help “make a statement,” he probably isn’t a real friend. There was a saying among antiwar activists in the 1960s and 1970s that the person who most fervently advocates violence is likely the undercover government agent. Activists should also recognize the likelihood that they could be surveilled online or in person. Parler was supposed to be a secure alternative to other online venues but millions of its messages were leaked earlier this year.

The answer is not to shut up and sure as hell not to cease fighting for your rights and liberties. Friends of freedom need to continue valiantly and peacefully championing their ideas. At some point, more Americans will finally recognize the folly of permitting politicians and government agents to capture vast unchecked power over everyone else. In the meantime, prudent libertarians will avoid writing anything in an email that they don’t want to hear read out loud in federal court.