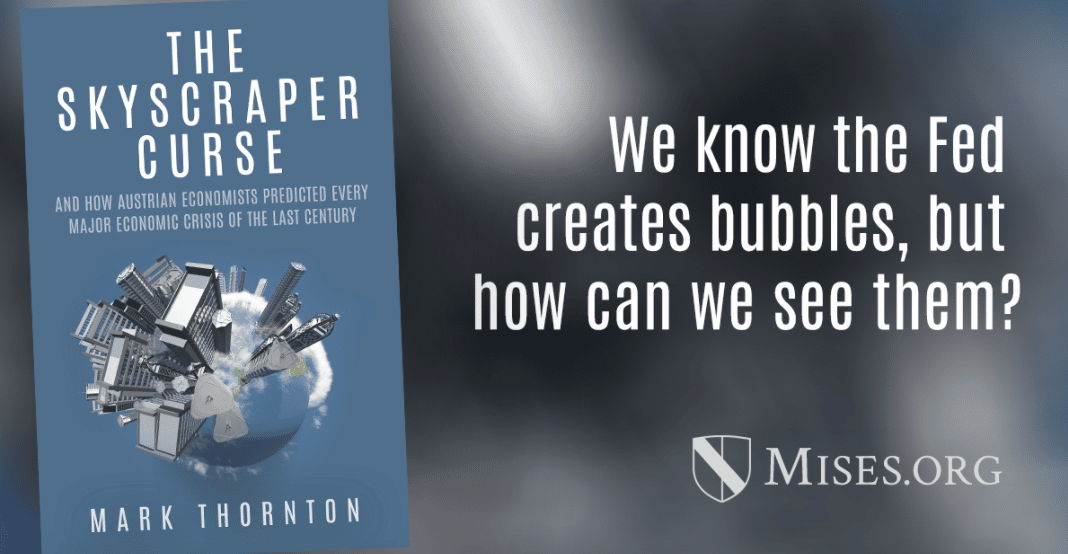 Zero Hedge reports “China’s Skyscraper Boom Comes Crashing Down Amid Developer Default,” noting reports that construction work was recently halted on the nation’s potentially tallest skyscraper, after the developer defaulted on a payment to the construction company.

They then invoked the Skyscraper Index which they describe: “The index is simple; the world’s tallest buildings are often constructed or completed at economic turning points, right before or just as the downturn gets underway.” The Skyscraper Curse is the economic crises that ensues with every new world record.

As I describe in my book, The Skyscraper Curse: And How Austrian Economists Predicted Every Major Economic Crisis of the Last Century, the Skyscraper Index has a remarkably accurate record dating back to the late 19th century.

The theory is that artificially low interest rates induce more borrowing for longer term investment projects such as research and development on new technologies, pharmaceutical drug projects, and of course long-term real estate projects, like skyscrapers. My book provides a detailed analysis of how low rates impact skyscrapers, but the most important point is that skyscrapers are just a good example of what is going on throughout much of the economy.

The article is correct that there is a great deal of building super tall skyscrapers in China, but is unclear if the stalled construction would have set a new record in China and certainly it would not set a world record. If it would have set a new Chinese record, then it would still indicate an economic crisis is coming to China soon.

No matter, the stalled Jeddah Tower in Saudi Arabia was set to become a new world record skyscraper, originally expected to be completed in 2020, which is when we can expect the next Curse to begin.

The fundamental case for an economic crisis in the near future should be obvious. Central banks around the world have implemented ultra-low interest rate policies.  In fact, a large portion of government bonds are now being financed at negative nominal rates, which is unprecedented. Many people manning Wall Street, hedge funds, and banks have never experienced a Federal Funds rate of 3%, which was the norm the previous half century.

Debt levels are at historic highs whether it is government debt, business debt, or individual debt. Debt levels tend to rise with low interest rates and expending economies, i.e. the artificial boom phase of the economy, only to become the most painful aspect in the economic crisis, i.e. government austerity budgets, corporate restructuring and bankruptcy, and bankruptcy, foreclosure, and unemployment for individuals.

Anecdotally, I am seeing buildings built taller, more spending on research and development, and newer companies poaching employees and customers from older companies.

The crisis usually begins when we see more stories about unexpected higher costs and lower revenues. While nothing about the next crisis is obvious to all—it never is–the stock markets will render their judgements.