The TSA’s Secret Watchlist for Travelers Who Don’t Kowtow

The TSA’s Secret Watchlist for Travelers Who Don’t Kowtow 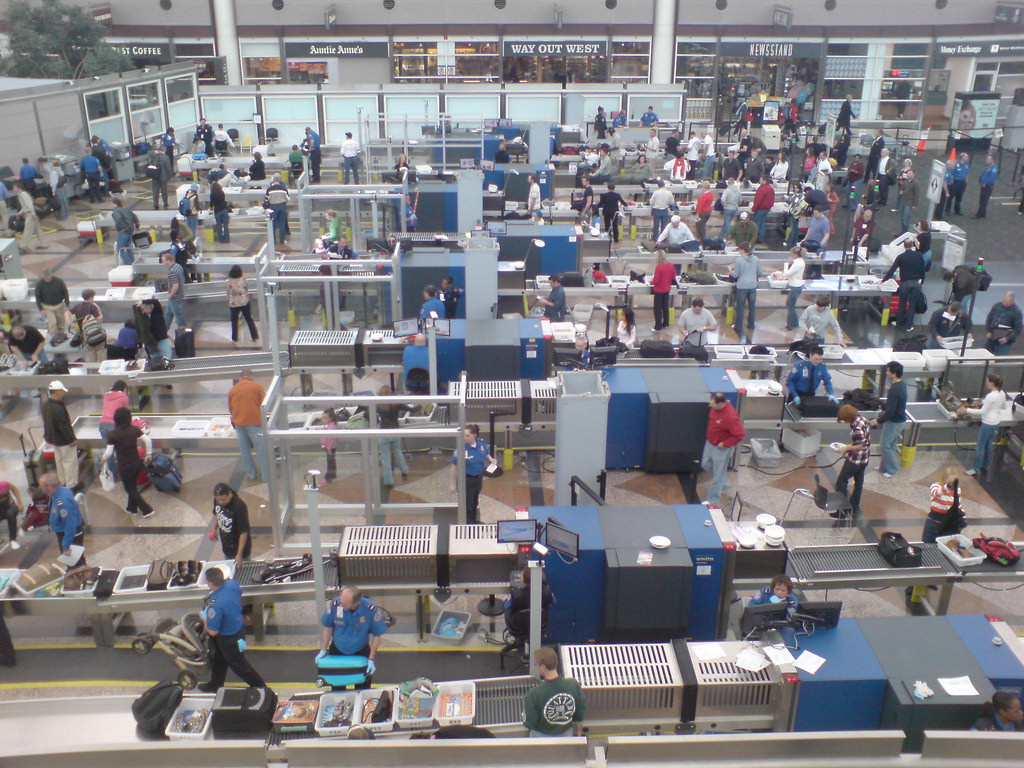 “I need a witness!” exclaimed the worried Transportation Security Administration screener at Reagan Washington National Airport a few months ago. Because I had forgotten to remove my belt before going through a TSA scanner, he explained that I must undergo an “enhanced patdown.” I told him that if he jammed my groin, I’d file a formal complaint against him. So he summoned his supervisor to keep an eye on the proceedings. After his white-suited boss arrived on the scene, I announced that I too, needed a witness. The boss bureaucrat assured me there was a video camera recording the scene. “But does it have audio?” I demanded to know. “That’s confidential security information,” he replied. “Ha! More like security theater,” I retorted.

I thought of this exchange when the New York Times revealed that the TSA has created a new secret watchlist for troublesome passengers. The TSA justifies the new list because TSA screeners were said to have been assaulted 34 times last year. “We were seeing an alarming increase in the number of assaults against our officers,” fretted Darby LaJoye, one of the TSA’s top security officials. TSA spokeswoman Lisa Farbstein declared, “TSA is committed to its people and wants to ensure there are safeguards in place to protect TSA officers and others from any individual who has previously exhibited disruptive or assaultive behavior at a screening checkpoint and is scheduled to fly.”

However, the TSA’s press office refused to release a list or any details of those assaults, including how many times accused assailants were arrested. The TSA also refused to answer my question: “How does TSA define an ‘assault’ on a TSA screener?” I was told I would need to file a Freedom of Information Act request for that information, but the TSA scorns federal law and often delays responses for months or years. Such tactics help explain why some people believe that “TSA” stands for “tactics to suppress accountability.”

Naturally, the TSA’s new official definition of “troublemaker” for this list goes far beyond people who slug screeners. Have you ever “loitered” near a checkpoint? Bingo. Any woman who ever pushed a screener’s hands away from squeezing her breasts could also be guilty — even though the TSA never formally promulgated its territorial claim to that part of the female anatomy.

Any behavior which is “offensive [to the TSA] and without legal justification” can get a person secretly listed, according to a confidential TSA memo acquired by the New York Times. “Challenges to the safe and effective completion of screening” also can be punished. If you complain that a TSA agent is violating your constitutional rights, you could be tagged as a troublemaker in perpetuity.

The TSA would have been more honest if it announced that anyone who fails to instantly and unquestioningly submit to all TSA demands is guilty of insubordination. ACLU attorney Hugh Handeyside warns that the new watchlist “permits TSA officials to blacklist people for conduct that could be wholly innocuous. This is conduct that’s so completely subjective, and in many cases likely completely innocent, it just gives officers too much latitude to blacklist people arbitrarily and to essentially punish them for asserting their rights and in doing anything other than complying with officers’ demands.”

What happens to travelers put on the watchlist? It’s a secret — so far. Rep. Bonnie Watson Coleman (D-NJ) declared, “What I don’t want … is an excuse for unfair, secret profiling that doesn’t even offer a chance for people to contest their name appearing on such a list.” The TSA denies that this is a “No Fly” list. However, the TSA has been caught in so many falsehoods over the years that people are naturally wary.

The TSA’s latest effort to vilify resistance would be less perilous if it was not one of most incompetent agencies on earth. Last year, a TSA undercover team succeeded 95 percent of the time in smuggling weapons and mock bombs past airport screeners in Minneapolis. The Department of Homeland Security inspector general concluded that TSA screeners and equipment had failed to detect mock threats roughly 80 percent of the time. Recent results parallel earlier findings revealing the TSA’s utter inability to detect smuggled items regardless of how badly it abuses travelers. Despite squeezing millions of behinds and breasts, the TSA has never caught a real terrorist.

Despite its debacles, the TSA recently became even more intrusive and punitive in its patdowns:

Such abuses spurred Flyersrights .org, the nation’s largest airline-passenger organization, to complain to the TSA last year about “highly invasive patdowns, especially on children, disabled, elderly, transgender, and sexual assault victims, thereby undermining public confidence and instilling fear and loathing by many passengers for the TSA, and used by no other country.”

Americans have filed thousands of complaints that TSA screeners had used excessive force or touched them inappropriately. How many TSA screeners have been fired as a result? Maybe none. What is the ratio of alleged assaults on TSA agents to the actual number of assaults on passengers (based on prevailing local definitions) by TSA agents? Alas, such trivia could never hold a federal bureaucracy’s attention. Or perhaps the agency simply presumes that “it’s not an assault when federal agents do it.”

We do know that the TSA dismally fails to police its workforce: the number of TSA misconduct allegations (including bribery, smuggling, and voyeurism) is up more than 50 percent since 2010 — including more than 17,000 misconduct allegations against TSA’s 55,000 employees in 2015. A House Homeland Security Committee report derided the agency’s “Misconduct Industrial Complex” for failing to respond to proliferating problems.

An ongoing federal court case is showcasing the TSA’s accosting prerogatives. Airplane captain James Linlor was traveling through Dulles Airport in 2016 when he suffered a brutal patdown that left him requiring surgery. A TSA video shows that the patdown was proceeding normally — if somewhat aggressively — until the TSA agent with no warning administered what appeared to be a karate chop to Linlor’s testicles.

Linlor sued, claiming that the TSA violated his rights with an unconstitutional and unreasonable search. The TSA asked the court to dismiss Linlor’s case because, instead of suing, he could have phoned in his complaint to the TSA Contact Center. In a federal court hearing last year, Justice Department lawyer Nicole Murley insisted that “there’s no law … establishing a specific degree of permissible intrusiveness of a [TSA] security screening patdown.” And since there’s no law, Americans should have no legal recourse no matter how they are abused. The TSA also insisted that its screener deserved legal immunity even if he did pummel Linlor’s private parts. Federal judge James Cacheris scoffed at the government’s “oratorical calisthenics” and rejected the inference that “a reasonable federal officer would be surprised to learn that gratuitously striking an individual in the groin while searching them violates the Fourth Amendment.” The judge quoted an earlier court decision that stressed the illegality of using “unnecessary, gratuitous, and disproportionate force to seize a secured, unarmed citizen.” Linlor’s case is currently before a federal appeals court.

The TSA has a long history of maximizing intimidation. In 2002, it created a secret system of fines to penalize travelers who had bad attitudes towards TSA screeners. It fined some Americans $1,500 for “nonphysical interference” at a TSA checkpoint — which included any “situation that in any way would interfere with the screener and his or her ability to continue to work or interfere with their ability to do their jobs,” according to TSA spokeswoman Ann Davis. The TSA failed to specify precisely how much groveling was necessary at checkpoints. It claimed the right to inflict surprise ex post facto penalties long after flights were completed on the basis of a 2002 Federal Register notice that announced that people could be arrested if they acted in a way that “might distract or inhibit a screener from effectively performing his or her duties…. A screener encountering such a situation must turn away from his or her normal duties to deal with the disruptive individual, which may affect the screening of other individuals.” Practically any comment or behavior that makes a TSA screener “turn away” from whatever he was doing can thus be a federal offense. The TSA’s attitude fines eventually fell into disuse.

So am I on the new TSA Troublesome Traveler watchlist? I have been hammering the TSA in print for 15 years, and TSA chief John Pistole claimed that a 2014 article I wrote was “misleading, inaccurate, and unfairly disparages the dedicated [TSA] workforce.” The following year, after I endured a Portland patdown that seemingly sought to turn my family jewels into a pancake, I raised hell in USA Today and elsewhere. More recently, a TSA press officer condemned me for an “outrageous” article as well as my previous “TSA hit pieces,” but his boss warned him against “picking a fight” (as I learned from a long-delayed Freedom of Information Act disclosure).

If I didn’t make the new TSA watchlist, it was not for lack of trying. The TSA’s latest anti-privacy charade is one more proof that the agency must be abolished. After pointlessly groping millions of Americans, the TSA has no excuse for groping millions more.

This article was originally published in the November 2018 edition of Future of Freedom.