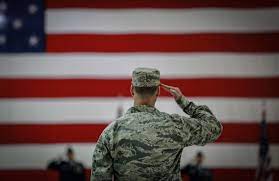 “For soldiers … coming home is more lethal than being in combat.”- Brené Brown, research professor at the University of Houston

Especially veterans who exercise their First Amendment right to speak out against government wrongdoing.

Consider: we raise our young people on a steady diet of militarism and war, sell them on the idea that defending freedom abroad by serving in the military is their patriotic duty, then when they return home, bruised and battle-scarred and committed to defending their freedoms at home, we often treat them like criminals merely for exercising those rights they risked their lives to defend.

As first reported by The Wall Street Journal, the government even has a name for its war on America’s veterans: Operation Vigilant Eagle.

This Department of Homeland Security (DHS) program tracks military veterans returning from Iraq and Afghanistan and characterizes them as extremists and potential domestic terrorist threats because they may be “disgruntled, disillusioned or suffering from the psychological effects of war.”

Coupled with the DHS’ dual reports on Rightwing and Leftwing “Extremism,” which broadly define extremists as individuals, military veterans and groups “that are mainly antigovernment, rejecting federal authority in favor of state or local authority, or rejecting government authority entirely,” these tactics bode ill for anyone seen as opposing the government.

Yet the government is not merely targeting individuals who are voicing their discontent so much as it is taking aim at individuals trained in military warfare.

Don’t be fooled by the fact that the DHS has gone extremely quiet about Operation Vigilant Eagle.

Where there’s smoke, there’s bound to be fire.

And the government’s efforts to target military veterans whose views may be perceived as “anti-government” make clear that something is afoot.

In recent years, military servicemen and women have found themselves increasingly targeted for surveillance, censorship, threatened with incarceration or involuntary commitment, labeled as extremists and/or mentally ill, and stripped of their Second Amendment rights.

In light of the government’s efforts to lay the groundwork to weaponize the public’s biomedical data and predict who might pose a threat to public safety based on mental health sensor data (a convenient means by which to penalize certain “unacceptable” social behaviors), encounters with the police could get even more deadly, especially if those involved have a mental illness or disability coupled with a military background.

Incredibly, as part of a proposal introduced under the Trump Administration, a new government agency HARPA (a healthcare counterpart to the Pentagon’s research and development arm DARPA) will take the lead in identifying and targeting “signs” of mental illness or violent inclinations among the populace by using artificial intelligence to collect data from Apple Watches, Fitbits, Amazon Echo and Google Home.

These tactics are not really new.

Many times throughout history in totalitarian regimes, such governments have declared dissidents mentally ill and unfit for society as a means of rendering them disempowering them.

For example, government officials in the Cold War-era Soviet Union often used psychiatric hospitals as prisons in order to isolate political prisoners from the rest of society, discredit their ideas, and break them physically and mentally through the use of electric shocks, drugs and various medical procedures.

This age-old practice by which despotic regimes eliminate their critics or potential adversaries by declaring them mentally ill and locking them up in psychiatric wards for extended periods of time is a common practice in present-day China.

What is particularly unnerving, however, is how this practice of eliminating or undermining potential critics, including military veterans, is happening with increasing frequency in the United States.

Remember, the National Defense Authorization Act (NDAA) opened the door for the government to detain as a threat to national security anyone viewed as a troublemaker. According to government guidelines for identifying domestic extremists—a word used interchangeably with terrorists—technically, anyone exercising their First Amendment rights in order to criticize the government qualifies.

It doesn’t take much anymore to be flagged as potentially anti-government in a government database somewhere—Main Core, for example—that identifies and tracks individuals who aren’t inclined to march in lockstep to the government’s dictates.

In fact, as The Washington Post reports, communities are being mapped and residents assigned a color-coded threat score—green, yellow or red—so police are forewarned about a person’s potential inclination to be a troublemaker depending on whether they’ve had a career in the military, posted a comment perceived as threatening on Facebook, suffer from a particular medical condition, or know someone who knows someone who might have committed a crime.

The case of Brandon Raub is a prime example of Operation Vigilant Eagle in action.

Raub, a 26-year-old decorated Marine, actually found himself interrogated by government agents about his views on government corruption, arrested with no warning, labeled mentally ill for subscribing to so-called “conspiratorial” views about the government, detained against his will in a psych ward for standing by his views, and isolated from his family, friends and attorneys. Within days of Raub being seized and forcibly held in a VA psych ward, news reports started surfacing of other veterans having similar experiences.

“Oppositional defiance disorder” (ODD) is another diagnosis being used against veterans who challenge the status quo. As journalist Anthony Martin explains, an ODD diagnosis

“denotes that the person exhibits ‘symptoms’ such as the questioning of authority, the refusal to follow directions, stubbornness, the unwillingness to go along with the crowd, and the practice of disobeying or ignoring orders. Persons may also receive such a label if they are considered free thinkers, nonconformists, or individuals who are suspicious of large, centralized government… At one time the accepted protocol among mental health professionals was to reserve the diagnosis of oppositional defiance disorder for children or adolescents who exhibited uncontrollable defiance toward their parents and teachers.”

That the government is using the charge of mental illness as the means by which to immobilize (and disarm) these veterans is diabolical. With one stroke of a magistrate’s pen, these veterans are being declared mentally ill, locked away against their will, and stripped of their constitutional rights.

If it were just being classified as “anti-government,” that would be one thing.

Unfortunately, anyone with a military background and training is also now being viewed as a heightened security threat by police who are trained to shoot first and ask questions later.

Feeding this perception of veterans as ticking time bombs in need of intervention, the Justice Department launched a pilot program in 2012 aimed at training SWAT teams to deal with confrontations involving highly trained and often heavily armed combat veterans.

For example, Jose Guerena, a Marine who served in two tours in Iraq, was killed after an Arizona SWAT team kicked open the door of his home during a mistaken drug raid and opened fire. Thinking his home was being invaded by criminals, Guerena told his wife and child to hide in a closet, grabbed a gun and waited in the hallway to confront the intruders. He never fired his weapon. In fact, the safety was still on his gun when he was killed. The SWAT officers, however, not as restrained, fired 70 rounds of ammunition at Guerena—23 of those bullets made contact. Apart from his military background, Guerena had had no prior criminal record, and the police found nothing illegal in his home.

John Edward Chesney, a 62-year-old Vietnam veteran, was killed by a SWAT team allegedly responding to a call that the Army veteran was standing in his San Diego apartment window waving what looked like a semi-automatic rifle. SWAT officers locked down Chesney’s street, took up positions around his home, and fired 12 rounds into Chesney’s apartment window. It turned out that the gun Chesney reportedly pointed at police from three stories up was a “realistic-looking mock assault rifle.”

Ramon Hooks’ encounter with a Houston SWAT team did not end as tragically, but it very easily could have. Hooks, a 25-year-old Iraq war veteran, was using an air rifle gun for target practice outside when a Homeland Security Agent, allegedly house shopping in the area, reported him as an active shooter. It wasn’t long before the quiet neighborhood was transformed into a war zone, with dozens of cop cars, an armored vehicle and heavily armed police. Hooks was arrested, his air rifle pellets and toy gun confiscated, and charges filed against him for “criminal mischief.”

Given the government’s increasing view of veterans as potential domestic terrorists, it makes one think twice about government programs encouraging veterans to include a veterans designation on their drivers’ licenses and ID cards.

Hailed by politicians as a way to “make it easier for military veterans to access discounts from retailers, restaurants, hotels and vendors across the state,” it will also make it that much easier for the government to identify and target veterans who dare to challenge the status quo.

Remember: no one is spared in a police state.

Eventually, as I make clear in Battlefield America: The War on the American People and in its fictional counterpart The Erik Blair Diaries, we all suffer the same fate.

Certainly, veterans have enough physical and psychological war wounds to overcome without adding the government to the mix. Although the U.S. boasts more than 20 million veterans who have served in World War II through the present day, large numbers of veterans are impoverished, unemployed, traumatized mentally and physically, struggling with depression, suicide, and marital stress, homeless, subjected to sub-par treatment at clinics and hospitals, and left to molder while their paperwork piles up within Veterans Administration offices.

On average, 6,000 veterans kill themselves every year. However, a recent study suggests that the rate of suicide among veterans may be more than double what federal officials report annually.

The plight of veterans today—and their treatment at the hands of the U.S. government—remains America’s badge of shame.

This article was originally featured at the Rutherford Institute and is republished with permission.

John W. Whitehead is a constitutional attorney, author, and founder and president of The Rutherford Institute.