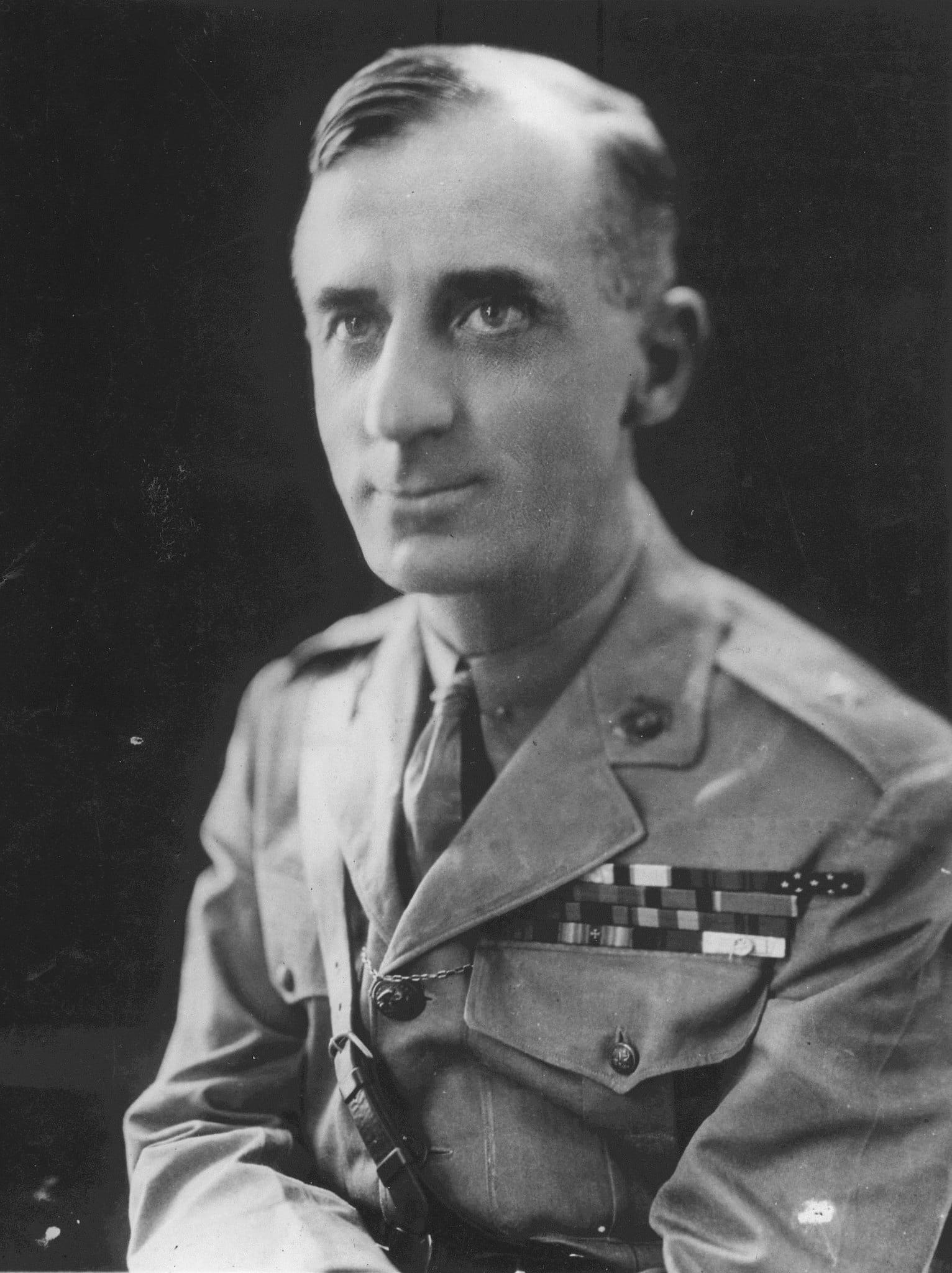 This article was originally published in The Gazette out of Cedar Rapids, Iowa on September 1, 1939, the day Nazi Germany invaded Poland. Major General Smedley Butler spent 34 years in the U.S. Marines where he participated in fighting in China, Mexico, Nicaragua, Panama, Haiti, the Philippines, and France. He is one of only nineteen men to win the Medal of Honor twice. In 1935 he published the book War Is a Racket. This was one of his final op-eds before his death on June 21, 1940.

When any given European war ends, what does Europe do? She starts to breed another generation of soldiers. So, in 25 years they have another war. But what has that to do with America? Will you be any happier if Poland should reappear as an independent country and your boy is buried in an unknown grave?

The last Unknown Soldier had a mother. So will the next Unknown Soldier, and you may be that mother. When your boy marches off to camp you have a 50-50 chance that you will never see him again.

I contend that only those who are ready to make a blood contribution to any war have a right to advocate it. Those who have no blood to contribute—in other words, who have no sons or close kin eligible for military duty—should have the common decency to remain quiet if they are in favor of our participation in one of these foreign brawls.

The decision to send our soldiers outside the United States to fight is one that can only be properly made by those who love those soldiers, not by theorists who have nothing precious to give. It is my feeling that those who advocate cooperation or any interference of any kind in Europe should stand forth and say:

“I will either go to the frontline trenches myself or I will send my dearest male relative. I will decline to take a swivel-chair job in the United States. Now I have a right to talk about this war.”

But if you don’t hear this statement from an advocate of war, shut him up.

Suppose fascism or communism does creep into a South American country and the people in those countries want to try it out? What business is it of ours?

Did all the nations of the world jump on us because we wanted to try out democracy? When this country went “New Deal,” did all the South Americans march up here and try to give us a beating? There are people in our country who look upon the New Deal as just as bad as fascism and communism.

You Can’t Shoot An Idea

These forms of government are only ideas. They are philosophies and the only way to beat an idea is with a better idea. You can’t shoot an idea out of a man’s head or out of a nation.

So with propaganda, the only way to best propaganda, and I hope that the mothers and fathers of America, who have sons to donate to this war, will be as fanatical against our meddling in the affairs of other nations as the propagandists are fanatical on trying to bring us in.

If you mothers and fathers who have eligible sons are tempted to slop over when you hear or read propaganda–and we will be deluged with it, particularly British stuff—I suggest that you go upstairs some night and see your fine, big boy—for only fine, big boys will be taken—when he is sleeping in bed.

Who Is The Nation?

I suggest that you put your hand on his head and rub the back of his neck; it will help you to be strong enough morally to protect him with your protest and your vote, and to stand up against this infernal war propaganda which may soon be upon us in a hundred forms.

When you look at your boy lying there in his sleep, close your eyes and look at this picture: That same body hanging on a barbed wire fence somewhere on the other side of the world, part of his body shot off, calling feebly for help or water. And for what?

What have you got to do with this?

If anybody comes over to this country and endangers you, your boy will take care of you and he won’t need to be taken—conscripted, they call it—and there won’t be any doubt about it.

Right now foreign nations are working on us. They are trying to arouse our sympathies, trying to involve us. We must be on our guard. Accept their invitations if we wish, but be careful to be for America first, and keep telling them: “Sorry, but we’ll not join you in your war.”

These articles are not intended to discuss the merits of this row in Europe because we don’t know what it is all about. They are not fighting over anything but property. One crowd has more than it needs and the other crowd thinks it hasn’t got as much as it should have, so they are going to fight about it.

You mothers of America: Don’t forget that it is the life of your boy that is at stake. And don’t forget, either, that even if you do get your boy back, 50 times out of 100 he will be a helpless, pathetic cripple.

And what will you get out of the war? Will your life be disturbed in the slightest degree because Poland has ceased to be an independent nation? Don’t you worry about anything except the independence of our own nation, and you can rest assured that the men of America will see to that.

I was one of those who voted for women suffrage, because I thought the women would stand together and make the world better.

The rights and wrongs of this dispute in Europe are so befogged that you can’t dig through the mist. Don’t be fooled by any slogans.

Talk about fighting for ideals in Europe. For years Hitler has been abusing Stalin and Russia and the communist cause and now Hitler and Stalin are in the same bed. England and France have been shouting about the preservation of democracy and at the same time doing their level best to marry Stalin, who represents the antithesis of democracy.

Why should you give up your children? Can’t you keep your feet on the ground?