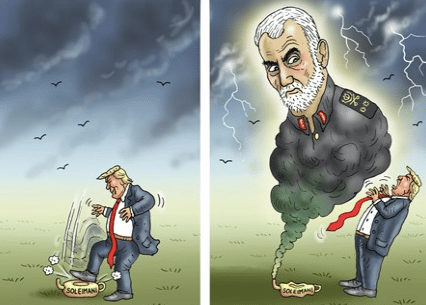 Is Trump yet ruing the day he lent his ear to the siren songs of the Iran-obsessed neocons? One can almost imagine the president, sitting in the makeshift situation room at Mar-a-Lago just a few days ago surrounded by the likes of Sen. Lindsey Graham, Mike Pompeo, Mike Pence, Defense Secretary Esper, and his Pentagon advisors who breathlessly present him an “opportunity” to kick the Iranian leadership in the face and also dismantle an operation in the works to attack US military and civilian personnel in the region.

All he had to do was sign off on the assassination of Gen. Qassim Soleimani, a man he likely had never heard of a couple of years ago but who, he was told, was “responsible for killing hundreds of Americans” in Iraq.

“Soleimani did 9/11!” – Pence helpfully yet insanely chimed in.

“You’re not a wimp like Obama, who refused to assassinate this terrorist,” he was probably told. “You’re decisive, a real leader. This one blow will change the entire calculus of the Middle East,” they likely told him. “If you take out Soleimani, I guarantee you that it will have enormous positive reverberations on the region.”

(Actually, that last one was from Israeli Prime Minister Benjamin Netanyahu’s address to Congress in 2002 where he promised the US that “If you take out Saddam, Saddam’s regime, I guarantee you that it will have enormous positive reverberations on the region.” Brilliant forecasting, Bibi.)

As could be expected, the cover story cooked up by the neocons and signed off on by Trump started taking water the moment it was put to sea.

Soleimani was not traveling like a man plotting a complicated, multi-country assault on US troops in the region. No false mustaches or James Bond maneuvers – he was flying commercial and openly disembarked at the terminal of Baghdad International Airport. He was publicly met and greeted by an Iraqi delegation and traveled relatively unguarded from the airport.

Until a US drone vaporized him and his entire entourage – which included a senior Iraqi military officer.

The furious Iraqi acting-Prime Minister Mahdi immediately condemned the attack in the strongest terms, openly calling for the expulsion of the US forces – who remain in Iraq ostensibly to fight an ISIS that has long been defeated but, de facto, to keep the beachhead clear for a US attack on Iran.

Arguing for the expulsion of the US in a special parliamentary session held on January 5th, Mahdi spilled the truth about Soleimani’s mission in Iraq. It was not to plot the killing of US troops: it was to deliver a response from Iran to a peace overture from the Saudis, the result of talks that were being facilitated by Iraq.

And the US side knew about the mission and had, according to press reports, encouraged Iraq to facilitate the Iran/Saudi talks.

Did the US neocons and Pentagon warhawks like Chairman of the Joint Chiefs of Staff Gen. Mike Milley knowingly exploit what they anticipated would be relatively lax security for a peace mission between Iran and Saudi Arabia to assassinate Gen. Soleimani (with collateral damage being Abu Mahdi al-Muhandis, the second-in-command of Iraq’s Popular Mobilization Units)?

And, to drill a little deeper, which US “allies” would want to blow up any chance of peace between Saudi Arabia and Iran? Factions within Saudi Arabia, where a fierce power struggle rages below the surface? No doubt. In Israel, where Netanyahu continues fighting for his political life (and freedom) with his entire political career built around mayhem and destruction? Sure. It’s not like Trump has ever been able to say “no” to the endless demands of either Bibi or his Saudi counterpart in crime MBS.

Who knows, maybe Trump knew all along and was in on it. Make war on a peace mission.

Whatever the case, as always happens the neocons have steered things completely off the rails. The cover story is in tatters, and the Iraqi democracy – for which we’ve been ostensibly fighting for 16 years with a loss of US life in the thousands and of Iraqi life in the millions – voted on Sunday that US forces must leave Iraq.

We destroyed Iraq to “give them democracy,” but they had the nerve to exercise that democracy to ask us to leave!

Iran could not believe its luck in the aftermath of the 2003 US invasion of Iraq, when it soon became clear that Iraq would fall into their hands. Likewise, it appears that the longstanding fervent wish of the Iranian leadership – the end of the US occupation of Iraq (and Syria) – will soon be fulfilled thanks to Trump’s listening to the always toxic advice of the neocon warmongers.

Can Trump recover from this near-fatal mistake? It is possible. But with Trump’s Twitter finger threatening Iraq with “big big” sanctions and an even bigger bill to cover the cost of our invasion and destruction of their country, it appears that his ability to learn from his mistakes is limited. A bit less time on Twitter and a lot less time with the people who hate his guts – Pompeo, Pence, Graham, etc. – might help.

Trump said of his decision to assassinate a top official from a country with which we are not technically at war, “We took action last night to stop a war. We did not take action to start a war.” But it doesn’t work that way. When you kill another country’s top military leadership you have definitely started a war.

What remains to be seen is how it will play out.