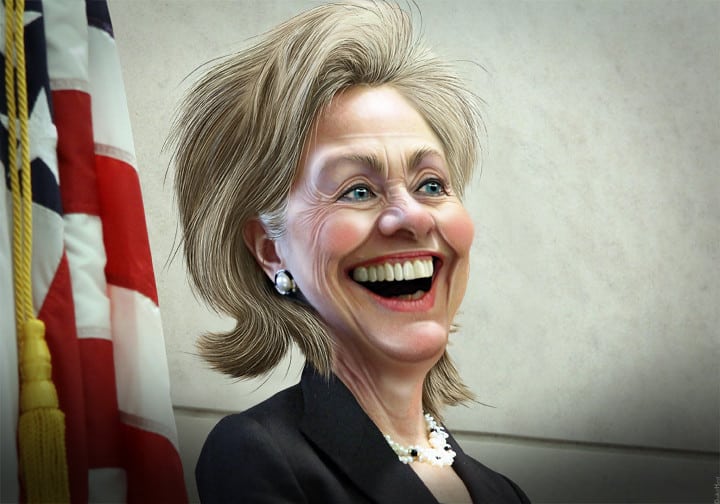 It can be a bittersweet moment when truth is all that’s left. Suspicions of infidelity become credit card receipts from a no-tell motel. A Facebook post tells of a meal shared when a business trip was scheduled. It is ugly, especially the certainty you were lied to by someone you once trusted, especially when that person wanted to be President of the United States. Two such instances that deserve notice passed through the mainstream media last week with barely a notice.

The first is that Hillary Clinton and the Democratic National Committee lied about Russiagate. Hillary paid experts to create two data sets, one purportedly showing Russian cellphones accessing Trump WiFi networks, and another allegedly showing a Trump computer pinging an Alfa Bank server in Russia. The latter was supposedly how Trump communicated incognito with his handlers in Moscow Center. We’ve seen the lipstick on the collar before but how do we know for certain this time?

Former Clinton campaign lawyer Marc Elias on May 18, 2022 during the trial of his former partner, Michael Sussmann, swore to it under oath. Special Counsel John Durham brought Sussmann to trial for allegedly lying to the FBI, denying he was working for a client when he was representing the Clinton campaign.

During the trial Mook testified Clinton signed off on the plan to send journalists information about the link between Trump and Alfa Bank despite concerns the connection was dubious at best. Mook’s testimony is the first confirmation Clinton was directly involved in the decision to feed the Trump-Alfa story to journalists.

Does this have to really be so ugly? Do we have to hear it in her own words to finally believe it? Sometimes it takes that harsh splash of cold water. Yes. Hillary tweeted on October 31, 2016 that Trump had a secret server and it was communicating with Russia. She knew her campaign paid to create that information and push it into the public eye. On that same day as her tweet The New York Times wrote the FBI “ultimately concluded that there could be an innocuous explanation” for the Trump-Alfa computer link under the headline “FBI Sees No Clear Link to Russia.” So Hillary knew and lied anyway.

The only thing left for the instant trial to prove is whether Sussmann lied about working for the campaign when he met with the FBI. He pleaded innocent but is a very bad liar; Sussmann billed the Clinton campaign for his meeting with the FBI. The material facts otherwise have been demonstrated—she lied. Cold and simple. No one colluded with Russia (as the Mueller Report also concluded).

And as bad as the original lie was, Clinton both hid the fact that she was the original source of the falsehood until, well, now, and maintained the validity of the lie long after the FBI and others had thoroughly debunked it. Twitter has not removed the tweet as “disinformation.” Silence allowed the lie a second life. What kind of president would Hillary have made if she was willing to lie like this to get elected? She is all appetite, a dangerous animal.

The second splash of the cold water of truth requires you to wallow deep in hypocrisy. After refusing to cover the Hunter Biden laptop story except to label it Russian disinformation in autumn 2020, the same NBC news organization headlined a story May 18, 2022, more than eighteen months after the laptop story first broke, reporting “analysis of Hunter Biden’s hard drive shows he took in about $11 million from 2013 to 2018” from Ukrainian and Chinese companies for consulting work. NBC reports this as breaking news, and made no mention they sat on the story for almost two years.

To understand why NBC spiked the story, one needs to go back to 2020 as the laptop tale was breaking. Almost in real time more than 50 former senior intelligence officials signed a letter claiming the emails “have all the classic earmarks of a Russian information operation.” With absolutely no evidence, the signers said their national security experience made them “deeply suspicious that the Russian government played a significant role in this case. If we are right this is Russia trying to influence how Americans vote in this election, and we believe strongly that Americans need to be aware of this.”

The letter was evil brilliance in that it played off earlier prejudices created by Hillary Clinton in 2016, that the Russians sought to manipulate American elections. In fact, most of the key signatories—James Clapper and John Brennan among them—had misdirected public opinion around the whole of Russiagate. In the hands of the mainstream media the meme quickly morphed into “the laptop is fake,” a parallel to “but her emails!!!”

NBC News wrote in 2020 U.S. intelligence agencies suspected Trump associate Rudy Giuliani, who had been shopping the laptop contents to various media organizations, had been in contact with alleged Russian intelligence agents. The FBI was “looking into whether the Russians played any role, and no official has ruled that out,” said NBC. Twitter, too, blocked the Hunter laptop story after intelligence officials shared Russian hack rumors.

NBC went on to claim in 2020 the laptop was not “newsworthy” as it contained no smoking gun (there were actually plenty of smoking guns. Just in the case of the Chinese companies, Hunter appeared to launder money—taking in six figures, skimming off a percentage, and handing the remainder over to a U.S.-based corporate entity associated with the Chinese organization to get around currency-export regulations) and despite any of Hunter’s ethical lapses “Trump… is ethically challenged when it comes to appearing to use the power of his office to enrich himself and his family.”

The NBC of 2022 offers no explanation why the same laptop contents which it deemed not newsworthy days before Joe Biden’s election to the presidency are suddenly newsworthy in the middle of his second year in office.

The takeaway is NBC News did not pursue the Hunter laptop story in 2020, when it mattered most, because it acted in collusion with the U.S. intelligence community. As Hunter publicly paid millions in back taxes and The New York Times among others validated the laptop contents, there’s no longer any need to pretend the story is not newsworthy or Russian trickery.

It is easy enough to say “so what?” at this point. Most people who did not support her concluded long ago Hillary Clinton was a liar and untrustworthy. Her supporters know she’ll never run for public office again, hence the claims that none of this matters. As for NBC, the last days before the election were confusing times, and the Hunter laptop story after all was out there for anyone who wanted to read it at the NY Post or Fox. So that doesn’t really matter either, right?

Wrong. What matters is less the details of Hillary’s lie than that as someone close to being elected as her would lie about such a thing, claiming her opponent was working for Russia against the interests of the United States he would soon swear an oath to defend. As for NBC (and Twitter), its journalistic slovenliness laid bare how news organizations work hand-in-hand with the intelligence community to manipulate elections.

Both of this week’s revelations are bombshells if you blow the smoke away. They chart successful efforts to manipulate voters by a sleazy candidate in the first instance, and the intelligence community in concert with the media in the second.

Such manipulations were responsible for clear vote swings. In the case of the laptop, via a poll taken after the 2020 election, one in six Biden voters would have changed their vote if they had known then what they knew by late November. Properly distributed, those votes would have swung the win to Trump.

As for Trump, no doubt in many minds Clinton and the intel community’s manipulations are being measured alongside whatever transgressions are attributable to Trump himself, as well as Jared and Ivanka. Those who think that way may have missed the day in kindergarten when everyone else was taught how two wrongs don’t make a right, and in high school where good and bad were shown not to be a zero sum game. Trump did not win to absolve Hillary of her sins.

And those who worry about the 2024 election being stolen over simple vote miscounting are thinking way too small.