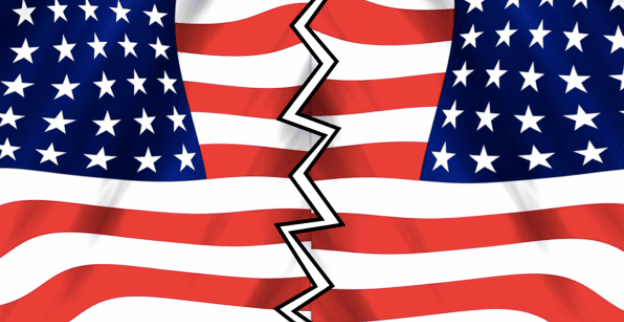 The great Austrian economist Ludwig Von Mises wrote: “History is a struggle between two principles, the peaceful principle, which advances the development of trade, and the militarist-imperialist principle, which interprets human society not as a friendly division of labour but as the forcible repression of some of its members by others.”

America was founded on the peaceful principle.

The country’s first President, George Washington, said in his farewell address: “It is our true policy to steer clear of permanent alliance with any portion of the foreign world”.

This policy, which can be packaged into the euphemism “America First” was the guiding policy for the first 100+ years of the country’s existence.

This did not mean that America was “isolationist.” Far from it, of course. Thomas Jefferson explained at his inaugural that the policy was one of: “Peace, commerce, and honest friendship with all nations – entangling alliances with none.”

Here was a land, the largest free-trade zone to ever exist, shielded by giant oceans, with a limited government that only had a few enumerated powers. The individual was master of his domain.

The results were Earth-shattering and life-changing — Prosperity, the likes of which have never existed before.

But alas, after 100+ years passed, new generations with little to no connection (or care) for the ideas of Washington & Jefferson, decided to change course for the worse. The ‘Old World’ ideas of power and empire crept in through the back door.

In this new embrace of the ‘Old World,’ the individual would no longer be the master of his domain. Government would be the master.

Suddenly, in 1898, after much careful planning by those who had an insatiable lust for power, America would take on the role of conquerer.

And conquer it did. In a single year, the United States took control of five far-flung nations, which contained 11 million people, all in one fell-swoop.

Washington & Jefferson were tossed into the dustbin. Independence was cast aside. Intervention was the new game in town. In 1898, the slow death of “America First” was given its first real kick to the chops.

Of course, the original role of government would have to be transformed. If America was to have an empire, it would have to take control of every American citizen’s earnings.

And so, in 1913, with the creation of the income tax, every American’s earnings would belong to the government first. The government would decide how much each person would be allowed to keep.

What a drastic change for the worse!

But an income tax would not be enough. After all, government can only tax people up to a certain point before they decide to revolt. American politicians, of all people, knew that!

So an even more insidious institution would be created, also in 1913. It would be called The Federal Reserve. This central bank would be granted a monopoly on counterfeiting money.

How much money? As much money as the government needs in order to sprawl itself around the world. Every American would be forced to use this “money,” of course, even though its purchasing power would be constantly eroded. Legal Tender Laws would make sure that there was no way out.

Washington & Jefferson would not recognize this at all. It’s literally the exact opposite of why the 13 colonies seceded from England.

This new era of empire would be dominated by “Bread and Circuses”. There would be plenty of food, and plenty of entertainment. What happens outside of America would remain out-of-sight and out-of-mind.

All political fighting inside of America would take place between two virtually indistinguishable factions. The gangs would passionately battle each other, but they would never battle the policy of empire.

So now we have two sets of 100 year periods in American history, each guided by completely opposite ideas.

The first produced liberty and prosperity in tremendous abundance. The second has produced a dependency, militancy and debauchery that has always been the lot of mankind living under the boot of power.

The first was underpinned by peace, trade, sound money, savings and investment.

The second has been underpinned by war, sanctions, counterfeit money, taxes, and crushing debt.

Those who live are always presented with a choice — continue, or change?

Change happens through individual choice. The ideas that we each individually embrace mean everything.

Power lives and breathes on your belief in it. Why do you think you’re surrounded by propaganda at every turn?

It’s to convince you that liberty is dead.

However, if you change your belief, you change everything. You breathe life into the idea of liberty.

If you breathe life into the idea of liberty, you make America a much better place.

Washington left us with these wonderful words: “Liberty, when it begins to take root, is a plant of rapid growth.”

The choice is always yours…..continue, or change?

Chris Rossini is an editor & writer for the Ron Paul Liberty Report and media coordinator for Ron Paul.