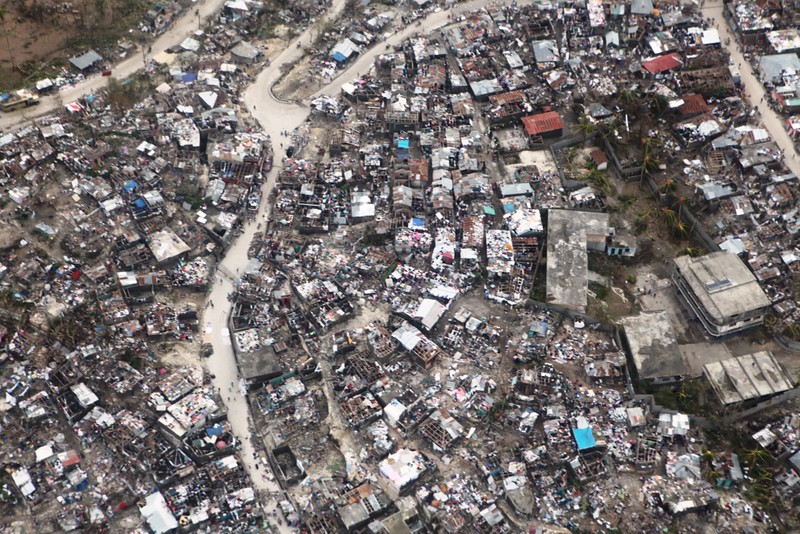 Despite Washington’s decision not to deploy Marines to Haiti after the July assassination of Haitian president Jovenelle Moise, the devastation of last Saturday’s 7.2 earthquake has provided U.S. leaders the cloak of humanitarian aid for doing just that.

In an effort reestablished under the 2010 earthquake response moniker “Joint Task-Force Haiti,” a detachment of roughly 200 Marines departed Camp Lejeune, North Carolina for Haiti on Wednesday. The detachment is supported by 420 sailors and several ships and aircraft from the U.S. Navy and Coast Guard.

The Marines’ mission is to provide security for Joint Task-Force Haiti, who will work to “help find stranded survivors from the disaster, deliver medical supplies, and provide direct medical assistance.”

The Marines will join other U.S. forces already deployed to Haiti, which include U.S. Navy P-8 Poseidon aircraft, “a 14-person situational awareness team from Special Operations Command South [stationed at] the U.S. Embassy[,]” and the USNS Burlington, a fast transport vessel.

Also deployed are “eight helicopters–three UH-60 Black Hawks, three CH-47 Chinooks, and two HH-60 Pave Hawks from Joint Task Force-Bravo in Honduras–to provide medical air support. Four of those helicopters have been tasked with moving a [] surgical hospital to Les Cayes, per the request of USAID.”

Other forces include the USS Arlington, an amphibious transport dock equipped with a surgical team and landing craft capabilities, and a number of Coast Guard assets including three H-60 Jayhawk helicopters and several cutters.

And yes, these forces will be equipped with plenty of COVID-19 vaccines for Haiti, a country which, until Moïse’s assassination, remained largely free of the Global North’s COVID-19 response.

According to officials, U.S. forces are prepared to remain in Haiti for up to four months or more as needed.

These efforts follow a pre-earthquake deployment of agents and personnel from the Department of Homeland Security and the FBI—both ostensible domestic policing agencies—to aid Haitian officials in the investigation of Moïse’s assassination.

While the humanitarian goal of aiding Haiti in the wake of human catastrophe is laudable, humanitarian efforts in Haiti have a disastrous past.

Indeed, Haitians are correct to identify the conceit of humanitarian assistance from a nation that has invaded, occupied, and meddled in that country for over a century—to calamitous effect.

“Haiti is a graveyard of failed NGO projects…perhaps no better a symbol of the crumbling of Haitian sovereignty is the national palace, which [since the 2010 earthquake] has still not been rebuilt.”

Surely, the individual soldiers involved in these deployments act with benevolence in their hearts. Their individual work in providing and conducting direct medical care, aid, and rescue and reconstruction efforts ranks among the very best things the U.S. Military does.

Even so, this effort comes with the caveat that it is funded at the involuntary and inflationary expense of U.S. taxpayers, a country that is nearly 30 trillion dollars in debt.

The unfortunate combined effect of these efforts will be to sink Haiti even deeper into U.S. control and exploitation.

To demonstrate this point, one must look at the orchestrators of the latest US relief efforts. They are the very same forces that pillaged that country in the aftermath of the 2010 earthquake.

Indeed, the newest iteration of Joint Task-Force Haiti is led by USAID, a traditional front of the CIA that is used as the vehicle for regime change operations across the world:

USAID was created in 1961 to help the United States win the ‘hearts and minds’ of citizens in poor countries through civic action, economic aid and humanitarian assistance. As a cold war policy tool, the agency was, at times, used as a front for CIA operations and operatives. Among the most infamous examples was the Office of Public Safety, a USAID training program in the Southern Cone that also trained torturers…

It is when USAID undertakes ‘discreet regime change operations that it runs into trouble. Indeed, its Office of Transition Initiatives now seems to be competing with, or at least complementing, the CIA on hi-tech propaganda and destabilization programs in Cuba, if not elsewhere as well.

Throughout the Cold War, USAID worked alongside the CIA to liquidate socialist movements across the Global South. More recently, it helped implement a phony CIA vaccination program in Pakistan to track down Osama bin Laden, and instead wound up spawning a massive polio outbreak. Across Latin America, USAID has funded and trained right-wing opposition figures, including Venezuela’s US-appointed pseudo-president Juan Guaidó.

USAID involvement in Haiti dates to at least the early 1990s. After populist candidate Jean-Bertrand Aristide became the first democratically-elected leader of that country in 1991, USAID, the National Endowment for Democracy (“NED”), and the American Institute of Free Labor Development (“AIFLD”) began pouring money into the country in an effort that was “specifically designed to fund those sectors of the Haitian political spectrum where opposition to the Aristide government could be encouraged.”

Soon after, in 1991, Aristide was overthrown by the U.S. in a coup d’etat. He would later tell two U.S. congressmen that he was “kidnapped by US troops” after being told to leave the country “to avoid bloodshed.”

In the wake of the 2010 earthquake, much of the work of coordinating the foreign recovery effort fell to Cheryl Mills, the head of the Clinton State Department’s “Haiti Task Force” and to Rajiv Shah, the then-newly-appointed head of USAID, neither of which had any disaster response experience. The result was “dysfunction…like nothing else [reconstruction officials had] ever seen.”

USAID was utterly incapable of coordinating foreign aid groups with local and national Haitian government, who were either incompetent, corrupt, or completely overhelmed. Reconstruction efforts lacked any clear strategy. “The ‘Action Plan,’ while laying out the core priorities for Haiti’s recovery, didn’t go into many specifics. That left Haiti’s ministries to devise their own plans.”

Five years and 13.5 billion dollars later (1.5 billion direct from USAID) and Haiti had cleared rubble from the streets, but had not accomplished much else. Adding insult to injury, the country was now suffering from a cholera outbreak caused by occupying U.N. military forces. Cholera is a disease that is effectively prevented with clean drinking water–something recovery groups were clearly unable to provide.

USAID and other foreign recovery officials were quick to place the blame on the Haitian people and the Haitian government.

The Haitian government—like the U.S. State Department (and all governments for that matter)—suffers from the same fundamental issue economist Ludwig von Mises illustrated in “Economic Calculation in the Socialist Commonwealth.” When the “bases of economic calculation are removed by the exclusion of exchange and the pricing mechanism [a] hopeless chaos” is the expected result.

That being said, it is no mystery why the Haitian Government did not mesh well with the USAID plan—it was not their plan!

Immediately after the quake, in fact, Bill Clinton was not only talking about Haiti’s reconstruction but was casting the tragedy as an opportunity for the country to “re-imagine” itself, using a modified version of the Collier plan that had already been endorsed by both the US and Haitian governments. “Is this going to be hard? Yes,” Clinton said in a teary-eyed interview with The Miami Herald. “Do I think we can do it? Absolutely, I do.” Around the same time, Hillary Clinton met in Montreal with representatives from a long list of donor countries and financial institutions to begin to plan for Haiti’s reconstruction. Bill Clinton, meanwhile, attended the world economic forum in Davos, Switzerland, where he appealed to private-sector leaders to invest in Haiti as part of what Clinton and others would call a new “Marshall Plan.” A 56-page document, known as the “Action Plan for National Recovery and Development,” was released in March 2010. Its author was Haitian Prime Minister Jean-Max Bellerive, a European-educated technocrat, well liked by the international donors, with support from officials at the World Bank and the UN. The vision represented a radically overhauled Haiti: a country bursting with mango-processing plants, fish farms, solar-powered irrigation facilities, industrial parks and duty-free zones, financed, to a large degree, by the private sector. “The plan suggests social engineering on a vast scale,” noted The Washington Post, “which would involve levels of public and private investment in Haiti never really imagined before.”

“Behind closed doors, the feeling of the Haitian government was this was just another foreign group they’d given permission to come in and take over their country,” says a senior international aid official. “But what could they do? The Haitian government knew it didn’t have the capacity to tackle this reconstruction on its own.”

So, as the devastation of the 2010 earthquake plays out once more in real time, USAID should not be trusted to once again coordinate the relief efforts of NGOs and the U.S. Military.

Of course, this conclusion begs the question: if not the U.S. military and international NGOs—who will provide desperately-needed relief efforts?

Individual Hatian communities must define their own priorities in coordination with local aid groups.

As the North American Congress on Latin America (NACLA) reports, there already exists a robust network of local humanitarian groups run by long-time Haitian professionals. These groups are trusted by their local communities and provide the most efficient help on the ground. Over and above organizations like the Red Cross, these local aid groups are worthy of support. Here is a current list.

For NGOs that do intend on providing aid, NACLA has established these minimum standards for aid in response to harmful pitfalls from 2010:

Sadly, as the next few weeks play out, the U.S. Military and international NGOs will likely repeat the “Fatal Assistance” of 2010. Regardless, the Haitian people must be given the respect and dignity to control their own destiny. Haitians and nonInterventionists everywhere must insist on it.