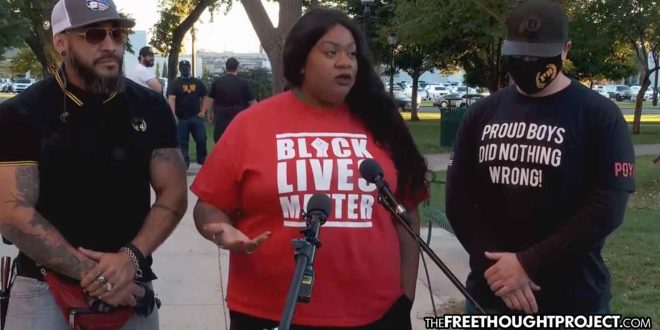 Something pretty incredible happened earlier this month in Utah and because it showed two ostensibly opposing groups come together instead of promoting divide, it was curiously absent from nearly all mainstream media. The Proud Boys—who are considered a hate group by the SPLC—came together with Black Lives Matter—who they are allegedly supposed to hate—and did something inspiring. They denounced racism and white supremacy and explained how they are now working together.

Not surprisingly, over the past several weeks, the mainstream media has run with stories of protesters and counter protesters fighting with each other rather than show Black Lives Matter of Northern Utah finding common ground with the Salt Lake chapter of the Proud boys. But that is why The Free Thought Project exists, to bring you the news that shows it is possible to think past labels and petty fighting and realize that we are all human.

DISCLAIMER: It is sad that this disclaimer is necessary but before anyone claims that The Free Thought Project is a supporter of the Proud Boys, we are not. We are supporters of peace and unity and putting differences aside to create a more freer world, and the following scenario out of Utah is a perfect example of this.

Jacarri Kelley, the leader of Black Lives Matter, Northern Utah said she was perplexed during a protest two months ago in Cottonwood Heights when she saw a member of the Proud Boys, who was not white, being accused of being a white supremacist.

“How can he be a white supremacist if he is Hispanic?” Kelley asked. “Or Polynesian? I originally thought he was black.”

This made the open minded BLM head reach out to the Proud Boys, who told her they were there simply to make sure that “nothing goes down.”

That is when they got together and decided they could help each other. For two months that is what they have done and during a protest in Salt Lake City two weeks ago, they held a press conference to talk about the importance of unity and reaching across labels to find out that just because someone has a different political view than you, doesn’t make them a bad person—unless of course they advocate hating people or superiority for having a certain skin color.

But Kelley dispelled that myth quite swiftly—at least with the Proud Boys at this particular protest—noting that they are not white supremacists. She also stated that they agree on more issues than which they disagree. She said they both have a problem with how the media is stoking constant divide.

Kelley explained that the rioters and looters don’t represent what the BLM movement is about, but that is how many in the media portray them. Kelley went on to say that her grandfather and her father served in the military and they have a right to say they are “proud Americans” just like the Proud Boys have a right to say it.

Kelley then said the Proud Boys “just need a little bit of respect and education to bridge gaps,” before introducing the chief of the Salt Lake Proud Boys to speak. She said the two groups have worked together for a couple of months and their work has opened the Proud Boys’ eyes to what Black Lives Matter is all about.

“Obviously, I am not black, so I cannot understand what Jacarri goes through every day,” said Thad, the group’s chief. “But meeting with them has given us understanding and now we can work together.”

Imagine that. A little empathy can go a long way.

When questioned about the group’s founder, Gavin McInnes—whose racism has been heavily documented online—the two Proud Boys explained that he is an instigator and is no longer part of the organization for that exact reason.

“He’s gone, he’s not part of the organization anymore,” both men said before officially denouncing racism all together.

“I will go out and say that the Proud Boys as a whole—I will say this on behalf of the entire national organization—denounce White supremacy,” the chief of the Proud Boys Salt Lake Utah Chapter said when the reporter questioned him, adding that being called white supremacists threatens their safety.

Thad said that the Proud Boys are simply “proud” of their country. “It means that the west is the best—western civilization is the best. That’s our opinion,” Thad said.

After Thad spoke, the president of the Salt Lake Proud Boys, who gave the name Seth, got up to speak.

“I don’t care what color your skin is, we’re all Americans, and we need to find a way to come together instead of divide,” he said.

Seth then explained that this bridging of the divide has led to the Proud Boys working with BLM to achieve police reform.

“Meeting and talking and having that understanding allowed us to move forward with working together on police reform,” Seth said.

Kelley, who first met the Proud Boys at a protest in Cottonwood Heights, says the partnership is real.

“We do need to be able to reach across the aisle and have these tough conversations,” Kelley added. And she is right, according to KUTV, the Salt Lake chapter of the group says they’ll continue to link arms with Black Lives Matter, Northern Utah.

This is how progress is made. When people put their differences aside and have meaningful conversations while practicing empathy, peace is the inevitable result. Sadly, the media is so hell bent on pushing divide and keeping people inside their own little bias-confirming bubbles, that conversations like this one are rare.

Instead, we see people blindly hating each other, screaming in each other’s faces and now have resorted to violence.

The world can learn a lot from Jacarri, Seth, and Thad, they just have to listen. It is high time we start doing more listening than screaming.

As the great Dr. Martin Luther King Jr. said, “one day we must come to see that peace is not merely a distant goal we seek, but that it is a means by which we arrive at that goal. We must pursue peaceful ends through peaceful means. All of this is saying that, in the final analysis, means and ends must cohere because the end is preexistent in the means, and ultimately destructive means cannot bring about constructive ends.”