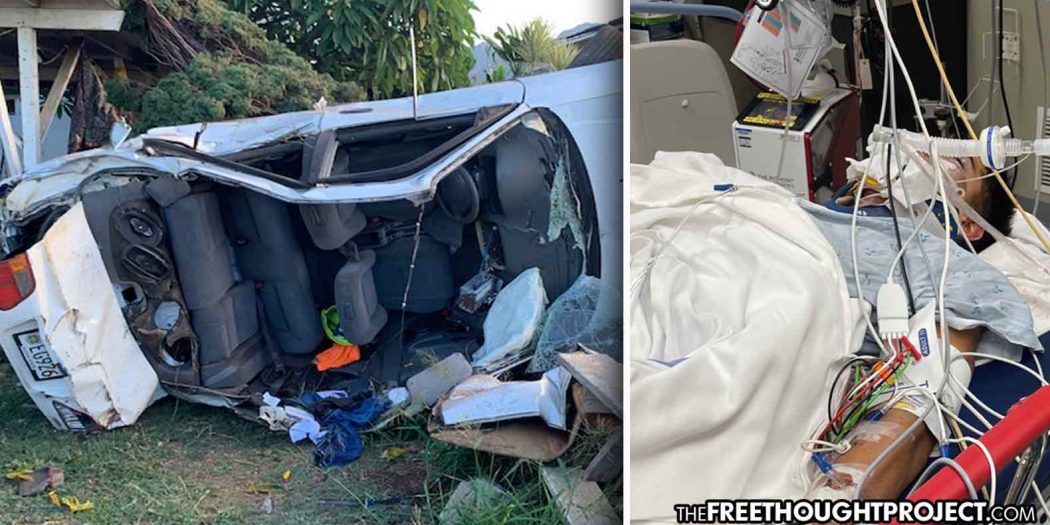 An attorney for several crash victims has released surveillance footage from the night of a major accident in which six people were seriously injured. In the video it appears that three Honolulu cops chase down a Honda Accord before it was run off the road in a horrific crash. Police then flee the scene immediately after—leaving the occupants to suffer and possibly even die.

The footage of the video was released by attorney Michael Stern who is representing the driver of the vehicle that night on Sept. 12. Jonaven Perkins-Sinapati had just left a party and had five other people inside his car when three police vehicles, one of which was unmarked, and none of which had their lights on, began following the car.

According to Stern and the video, the officers pursuing the Honda didn’t have their lights on so Perkins-Sinapati had no idea they were cops. What’s more, according to the video, it was clear that these officers weren’t acting like cops.

According to Honolulu Civil Beat, who first obtained the video from Perkins, moments after the video was shot, the Honda carrying Perkins-Sinapati and five other people veered off the road, struck a concrete curb, collided with trees and continued over a concrete wall at the intersection of Orange Street and Farrington Highway, seriously injuring five of the occupants, according to Stern and an HPD report detailing the crash.

According to attorneys representing the other occupants of the car and one of the passengers, 20-year-old Justus Sinapati Mason, the unmarked Toyota 4-Runner was responsible for running the Honda off the road.

When the Honolulu Police Department was questioned about the crash, HPD spokesperson Michelle Yu told reporters, “The three officers had their police powers removed following the incident and have been reassigned to non-patrol duties. The criminal and administrative investigations are ongoing.”

As the video shows, the Honda passes the 7-Eleven gas station as it is being pursued by the 4-Runner and two marked vehicles. After the Honda crashes off camera, the three police vehicles flee the scene by circling back in front of the gas station.

The 4-Runner is seen pulling up next to a marked vehicle before they both pull off in the opposite direction, followed by the other cruiser.

“So clearly they went around the back after the accident, maybe Jade Street or something,” Stern said. “And they still have lights off on top of that.”

According to Stern, the officers should have never pursued the Honda that night after they left the party. What’s more, the three cops who have been suspended for allegedly causing and then fleeing the crash, were responsible for breaking up the party in the first place—leading to speculation about a personal issue at hand.

“It was probably about 4.2 miles from the beach to where the accident happened,” Stern said. “They were being followed with no lights on so they didn’t know who was behind them.”

“Police are required to have their lights on and, if the clients or the driver had done anything wrong, then they would have been pulled over. Nothing like that ever happened,” he said.

Tragically, Jonaven Perkins-Sinapati, the driver, was critically injured during the crash and is still on life support. Another passenger, Dayten Gouveia was paralyzed from the waist down. Two others suffered fractured spines and another was left blinded in one eye from glass shards.

Adding to the suspect nature of the crash is the fact that HPD originally listed the crash as a “single car accident” but then removed the post from their website.

“They just caused the accident, left, and tried to cover it up,” Stern said. “A lot of people are going to suffer for the rest of their lives. I’ve handled 2,000 auto accidents. I’ve never had anything close to this.”

While no amount of money will ever undo the damages caused by this crash, at least the video below will allow the victims to seek compensation and possibly lead to the officers involved being held accountable.