WATCH: Cop Flips Over Pregnant Woman’s SUV to Give Her a Speeding Ticket

WATCH: Cop Flips Over Pregnant Woman’s SUV to Give Her a Speeding Ticket 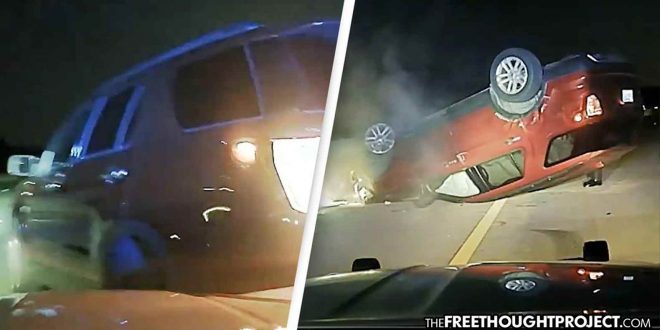 Cops, as the Free Thought Project reports on a regular basis, are extremely quick to escalating force. From baton blows to trigger pulls, American cops love to dish out the violence with extreme prejudice. There is another form of violence police use that doesn’t get mentioned as much but is just as deadly. It is called the Precision Immobilization Technique (PIT) maneuver and a pregnant woman in Arkansas is seeking to change police policy after a cop used a PIT maneuver on her after accusing her of speeding—a traffic ticket.

Last July, Nicole Harper was driving home on the interstate when Senior Cpl. Rodney Dunn accused her of driving fast and targeted her for revenue collection.

Not wanting to pull over on a dark highway, Harper, who was pregnant with her daughter at the time, tried to drive to a well lit spot to be extorted. Harper put on her hazard lights, pulled into the right lane and slowed down to look for a well lit area to stop.

Harper failing to immediately prostrate herself before the state to receive her promise of extortion, however, seemingly enraged the Arkansas state trooper. That’s when Dunn decided it was time to perform a PIT maneuver on the pregnant woman which caused her car to roll end over end before crashing into a concrete barrier at 60 mph.

The trooper’s body camera recorded the conversation after the deadly maneuver.

“Why didn’t you stop?” Dunn questioned.

“Because I didn’t feel it was safe,” Harper said.

Dunn responded, “well this is where you ended up.”

“I thought it would be safe to wait until the exit,” Harper said,

“No ma’am, you pull over when law enforcement stops you,” the trooper stated.

“We don’t anticipate vehicles rolling over nor do we want that to happen,” Dunn said, adding, “all you had to do was slow down and stop.”

“I did slow down, I turned on my hazards, I thought I was doing the right thing,” Harper said.

Harper explained that the exit at which she intended to stop was less than a half mile down the road.

Harper has since filed a lawsuit against the Arkansas State Police accusing the trooper of using negligent and excessive force by conducting the PIT maneuver.

The lawsuit states and the video illustrates that Harper had slowed down and indicated that she was going to stop but the trooper escalated to deadly force anyway.

“I feel like I had heard that’s what you do, you slow down, you put your flashers on and you drive to a safe place,” Harper told FOX 16, and it turns out, according to the State Police’s own textbook—that is exactly what you are supposed to do.

According to State Police’s “Driver License Study Guide,” under “What to do When You Are Stopped” section, the first instruction says to  use, “emergency flashers to indicate to the officer that you are seeking a safe place to stop.”

This is exactly what Harper did and she was nearly killed for it.

PITs are becoming more common with State Police. Recent FOX 16 Investigates uncovered State Police attempted or used pits on at least 144 drivers last year. That’s almost double compared to the year before. In 2020 at least three people were killed during PITs, one was a passenger.

“What was done to Ms. Harper was deadly force,” Harper’s lawyer Andrew Norwood said, noting they intend to change to policy on when cops use PIT maneuvers.

“There was a less dangerous and more safe avenue that could have been taken before flipping her vehicle and making it bounce off a concrete barrier going 60 miles an hour,” Norwood said, and he is right.

What this incident illustrates is the lengths to which cops will go to extort citizens over traffic violations. If a cop claims you made some arbitrary and victimless infraction, that cop will extort you. If you refuse to be immediately extorted, that cop will try to kill you.