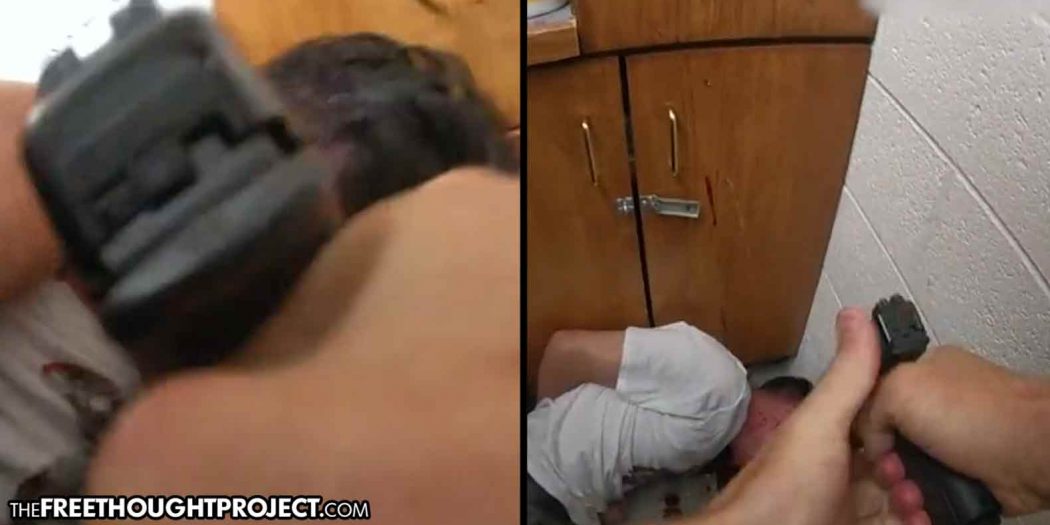 Nearly two years have passed since Sgt. Tyler Longman ran into a police booking office, gun drawn, threatened to kill the fully handcuffed Michael Chad Breinholt, and then pulled the trigger with the gun to his head. Despite the gruesome execution caught on body camera footage, the department ruled Breinholt’s death justified and the killer cop remains gainfully employed with the West Valley City police department.

At the time of his death, Breinholt was in need of mental health help but was brought to jail instead. Body camera footage, recently released, from that fateful day on Aug. 23, 2019, shows a confused, depressed, and mentally unstable man crying in the police department—begging for cops to bring him to a mental health facility.

As the video shows, for over 2 hours, Breinholt is held in the processing room as cops taunt and threaten him with years in prison. They were going to charge him with felony DUI despite no officers witnessing him driving drunk.

On the night he was killed, Breinholt showed up intoxicated at his girlfriend’s workplace and a coworker called 911. According to the body camera footage, his girlfriend and coworker explained that Breihholt had taken some pills and they were concerned for his health, telling officers Matt Lane and Taylor Atkin that he was suicidal.

“It seems like he just wants to commit suicide,” his girlfriend told police, later adding: “He just said that he took all those pills so he’ll die.”

Instead of bringing the clearly suicidal man to the hospital for detox and mental health help, officer Lane arrested him on charges of DUI.

While processing the mentally ill inebriated man, cops continued to threaten more charges, taunting Breinholt as he rolled on the floor and begged to go to the Huntsman Mental Health Institute, known as “UNI.”

“I’m not going to sit here all night and play games with you,” Longman told Breinholt. “You’ve already wasted our fire department’s time by having them come out for some bullsh–, OK? I’m not taking you to UNI, I’m taking you to jail.”

Clearly hopeless at this point, Breinholt, who had been searched and cleared and was cuffed with his hands behind his back, claims, “I have a gun in my pants.”

“Good try,” Atkin said, before telling another officer: “We checked him. Does that count as a threat of violence if he reached into his pants and said, ‘I have a gun in my pants?’”

Breinholt is then ignored as a cop taunts him again and asks if he now has a gun in his shoe.

Moments later, as Atkin and another officer, Raymond Wilhelm, lift Brienholt up to remove his shoe, a struggle erupts and Atkin claims Breinholt had his gun.

But this was not true. Though video shows Breinholt’s hand on Atkins holster for a brief moment, at no point did it ever leave said holster—making it impossible for him to have the officer’s gun.

Nevertheless, this was enough for Longman to go into execution mode as he enters the room.

As the video shows, Longman enters the room, gun drawn, and tells Breinholt, “You’re about to die, my friend,” before pulling the trigger at point blank range to Breinholt’s head, killing him instantly. It took only six seconds for the entire murderous event to unfold.

Two years later and Longman is back out on the beat, ready to kill again. Breinholt’s death was Longman’s third on-duty kill—all of which have been justified by the department and vigorously defended by the police union.

“Chad would still be here had something happened to that officer,” his brother, Chase Breinholt, said. “If he could have been put on some other duty or let go or if there was something put in place after taking the first person’s life. Definitely after [taking] a second person’s life. Why is he still carrying a gun?”

The family is now filing a lawsuit against the city, claiming that Longman had no reason to fire that round.

“Chad Breinholt was completely restrained and controlled the moment he was shot in the side of the forehead point-blank by Officer Longman,” Colin King, the attorney for Breinholt’s family members, said. “That use of force was utterly and completely unjustified. He was a young man who was handcuffed behind his back, who had [several officers] in the room controlling him. If this isn’t excessive force, I don’t know what is.”

The “going for my gun” defense is all too often used to justify police executions like Breinholt’s, and in the many years we’ve been reporting, we’ve never seen anyone actually pull a gun out of a cop’s holster.

Police holsters are designed to prevent anyone but the officer from removing the weapon.

As the assassination attempt on Donald Trump proved in 2016, it is virtually impossible to take a cop’s gun.

The reason a police officer’s weapon is so hard to take is due to the multiple safety checks built into the holsters. It appears from the video that the type of holster that this officer was wearing, and that the majority of police officers wear, is a Dual Retention Hooded Holster, with optional hood guard.

The “hood” of the holster, or the strap that holds the weapon in the hard plastic holster, must be pushed down from a particular angle and then pushed forward, prior to exposing the back of the weapon.

During a struggle, it is possible that the hood could be pulled down, exposing the back of the gun. However, there is yet another line of defense. The hood guard adds another entirely new level of pistol retention as it is specially designed to prevent an assailant from pushing down the hood.

Even if the hood guard was removed and the hood was pushed back, there is yet another fail safe. The third line of retention in this holster does not allow for the pistol to be removed, nor the slide pulled back, without knowing exactly how to lift it out of the holster.

These holsters usually have a tension screw in place that allows for its users to set the desired level of friction needed to remove the pistol. However, if someone tries to pull the pistol out of the holster in any direction other than the officer’s set preference, the slide will not rack, nor will the pistol come out.

Knowing the function of police holsters and the multiple lines of retention built into them, the claim of “he went for my gun,” seems more like a reason to justify deadly force than a reason for actually needing deadly force.

Of course, it is a highly stressful situation when a criminal or anyone is attempting to grab an officer’s weapon from the holster. But, as the police in the video above illustrated—it is not always a reason to end someone’s life.

Breinholt was surrounded by cops, his hand likely off the officer’s gun at this point, handcuffed, and yet Longman put a gun to his head and murdered him.