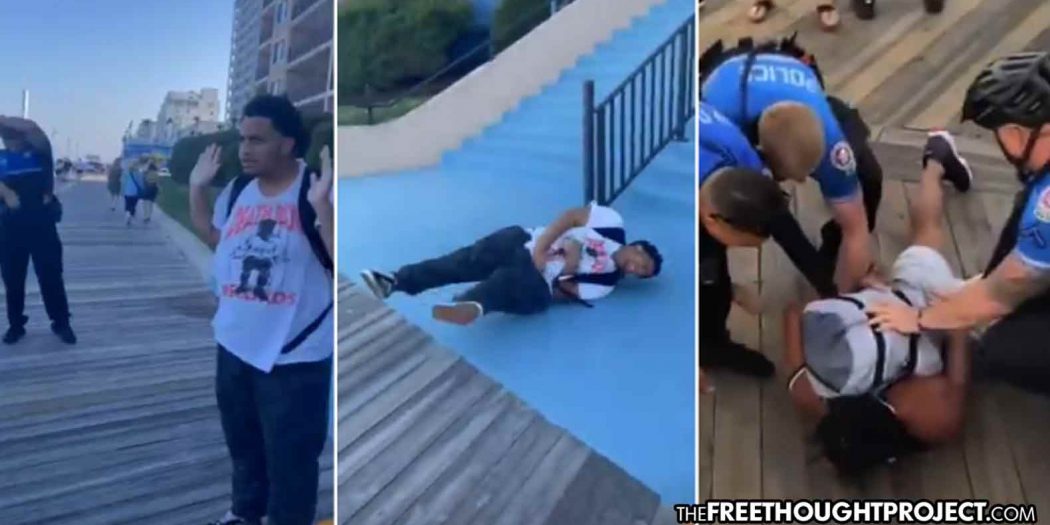 In the land of the free, police are tasked with enforcement of all laws no matter how arbitrary or even whether or not there is a victim involved. If you break one of these arbitrary laws in the land of the free, police claim the right to extort or kidnap you. If you resist this kidnapping and extortion for a victimless crime, police claim the right to beat or kill you. Despite the utterly tyrannical implications stemming from the enforcement of laws with no victims, the majority of Americans remain completely oblivious to the effects of it.

Even when there are videos of blatant displays of government violence being inflicted on citizens over the enforcement of victimless crimes, most of America reacts with callousness and statements like, “if you don’t break the law, you have nothing to worry about.” As the following video illustrates, until this mentality shifts, police in America will continue to use violence against citizens who cause no harm.

Over the weekend in Ocean City, Maryland, a group of young men were outside hanging out. The men were bothering no one. They were not robbing, looting, stealing, or otherwise harassing passersby. They were talking among themselves while a few of them inhaled from vaping devices.

Because government claims the right to tell people where they can and cannot inhale from vape pens — even when outdoors — police approached the group of young men to initiate the process of extortion.

According to police, when officers approached the men and told them about a local ordinance prohibiting smoking and vaping outside of the designated areas on the boardwalk, the young men stopped vaping and walked away.

However, as the men walked away, one of them dared to take another puff from the vape, thus triggering the officers to escalate the situation. As stated above, police in the land of the free will go to extreme, violent, and often deadly lengths to enforce the most arbitrary laws for crimes with no victim.

One of the teens in the video was the tasered with his hands up, hog tied, and dragged off.

Police in Ocean City Maryland tasered a 17-year-old teenager after they accused him of vaping yesterday. pic.twitter.com/PVzagAV5i1

Then, when officers demanded to see Brian Everett Anderson’s identification, Anderson, 19, allegedly refused to provide it, maintaining he had done nothing wrong. This refusal to id then gave the officers just cause to initiate force against Anderson, who had harmed no one.

Police claimed Anderson “resisted arrest,” and force was then escalated. As the video shows, Anderson is face down on the ground with three cops holding him down. As Anderson asks what he’s done wrong, one of the cops begins delivering overzealous knee strikes to the teen.

As he watched his friend get attacked by police, Kamere Anthony Day, also 19, began yelling at the officers to stop. This yelling gave officers just cause to then initiate force against Day as well.

Both men were arrested and charged with multiple crimes — despite harming no one. As WBAL reports:

Anderson was charged with disorderly conduct, resist/interfere with arrest, second-degree assault and failure to provide proof of identity. He was released on his own recognizance.

Day was charged with disorderly conduct, obstructing and hindering, failure to obey reasonable a lawful order, resist/interfere with arrest and second-degree assault. He was released on his own recognizance.

After the video began to go viral, police were quick to release a statement, reminding the public they are allowed to use violence against citizens, even for the most arbitrary laws for victimless “crimes.”

“We are aware of the social media videos circulating regarding this incident. Our officers are permitted to use force, per their training, to overcome exhibited resistance. All uses of force go through a detailed review process. The uses of force from these arrests will go through a multi-level examination by the Assistant Patrol Commander, the Division Commander and then by the Office of Professional Standards.”

THERES MORE! @GovLarryHogan you gotta stop putting these unqualified cops in ocean city every June for theese kids .. this is honestly disgusting , it puts a bad look on senior week for kids .. they just graduated to get brutalized by police .. please do something about this!! pic.twitter.com/sG3aBhnA9f