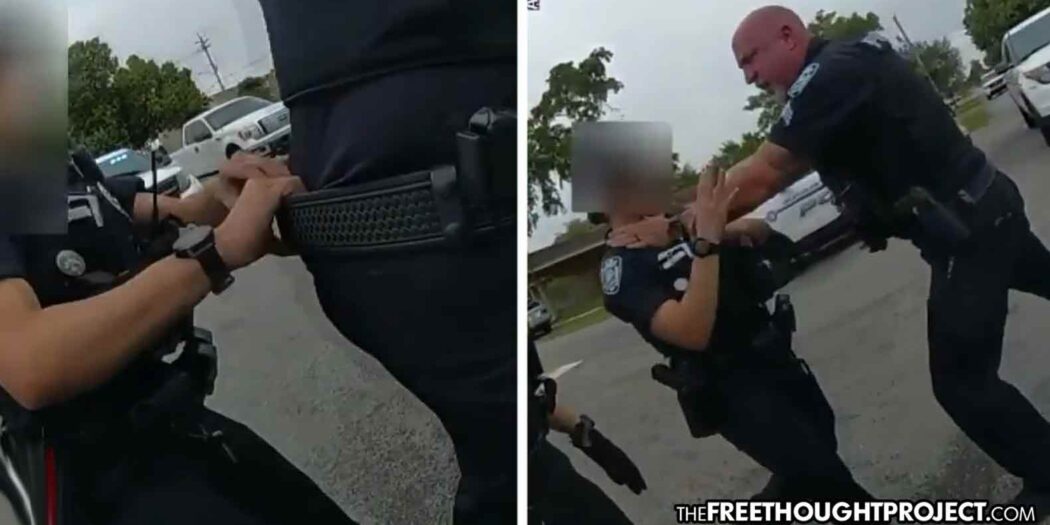 Since the murder of George Floyd rocked the nation in 2020, across the country police departments and municipalities have passed legislation requiring cops to intervene if they see their fellow officer—like Derek Chauvin—committing a crime or violating someone’s rights. Since then, TFTP has reported on several instances of good cops stepping in to stop bad cops from unleashing their pent up anger on unwitting suspects. In the following scenario, however, a good cop stepped up to stop a bad cop and it got her attacked.

A veteran Sunrise police sergeant is on desk duty and under investigation this week after he was captured on video strangling a female officer. The incident unfolded in November but body camera footage from the shocking scene was only just released this week. Apparently, the audio in the footage is too revealing for the public to hear, so the video is silent but it’s bad enough.

On November 19, 2021, Sunrise police were arresting at man at a local convenience store for allegedly assaulting people outside. When the video begins, the man is in handcuffs and being loaded into the police cruiser. Though he was putting up some resistance at first, eventually the man sat down and got inside.

The suspect’s compliance was of no concern to Sgt. Christopher Pullease, however, who pulled up to the scene after the suspect was in the back of the squad car. For no apparent reason, Pullease began threatening the suspect with a can of pepper spray.

“I find it to be inappropriate and unprofessional, because what he did is he escalated the situation when calm was actually required,” Chief Anthony Rosa told 7 News Miami, describing Pullease’s actions that day as “disgusting.”

Luckily for the suspect, there was a good cop on the scene who was unafraid of stepping in to stop a bad cop in his tracks. As Pullease threatened the handcuffed man, priming the taxpayers of Sunrise for a lawsuit which they would be forced to fund, a brave female officer came from behind the raging cop and intervened.

As the video shows, the female officer grabbed Pullease by his duty belt and dragged him away before he could inflict anymore damage. The suspect had been saved, but the angry sergeant then turned his rage on the hero cop.

Pullease is then seen in the video grabbing the female officer by her neck, essentially strangling her as he shoved her backward for daring to stop him from carrying out his fantasies of aggression against incapacitated individuals. He then slams her up against the patrol car before turning his rage back on the handcuffed man.

Despite this clear act of assault captured on video, Pullease hasn’t been arrested, fired, or even placed on unpaid leave. Instead, he’s still collecting a paycheck as the department investigates. 7 News asked why that was the case.

“If one of us had ever grabbed an officer by the throat, we would be arrested. We would be put in jail. Why is that not happened with him?” 7 News asked the chief as he dodged the question.

As you watch the video below, try to think of a situation in which the officer’s behavior is not criminal.

This case is similar to that of former Buffalo Police Officer, Cariol Horne who has been fighting for her pension since she was fired after 19 years on the force, over a near-identical incident in 2006 when she stopped a fellow officer from choking a handcuffed suspect. For her heroic actions, instead getting rewarded and allowed to retire, Horne was beaten and fired.