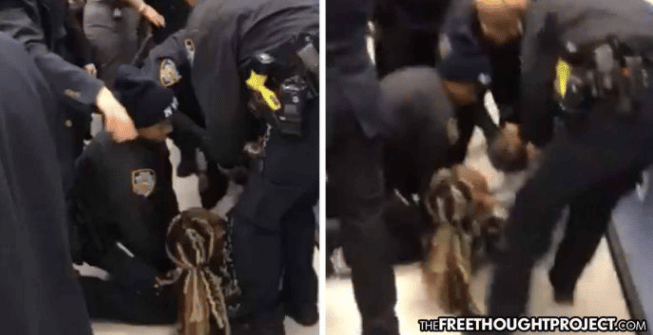 New York, NY — Jazmine Headley and her one-year-old son waited in a Brooklyn public assistance office last year for two hours in an attempt to receive some aid. That aid would never come, however, as an appalling video shows, police would show up, rip Headley’s baby from her arms and then arrest the mother. Now, instead of the cops who savagely attacked an innocent mother and her baby facing accountability, the taxpayers of New York are shelling out $625,000.

“I am very pleased that Ms. Headley will receive a settlement that reflects both the harm that came to her and her son and an acknowledgement from the City of New York of the extent of their wrongdoing in this matter,” Lisa Schreibersdorf, executive director of Brooklyn Defender Services, which represented Headley, said. “I hope that this recognition also results in changes to the way the city treats people who are trying to access the help and services they need and deserve.”

According to the woman who took the video, Nyashia Ferguson, Headley hadn’t done anything wrong and the entire incident was over nothing.

As Ferguson explained in the video she posted to her Facebook account, when Headley was at the Supplemental Nutrition Assistance Program office in Boerum Hill last year, the crowd was larger than usual and there were no chairs available.

Because she had such a long wait to see an aid worker, Headley simply sat on the floor to wait it out. But a security guard in the office apparently didn’t like this mother sitting on the floor, according to Ferguson. So, she called police, Ferguson wrote on the post.

“The security guard, I guess she came over and told her she couldn’t sit there. So she’s like, ‘Where am I going to sit?’ She was like, ‘I guess you’re going to just have to stand.’ She said, ‘Well, I’m not going to stand with my son,’” Ferguson told CBS New York. “She was like, ‘What is the crime? What did I do wrong?’ And then it just escalated.”

Ferguson said Headley tried to tell the officers her side of the story, but they weren’t hearing it and this created a chaotic situation.

“The baby was screaming for his life,” said Ferguson. “The lady was begging for them to get off of her. I was scared.”

Three cops show up first, who then surround Headley and attempt to pull the baby from this mother’s arms. Then, another officer, with their back to the camera, moves in with an apparent mission to separate the baby from his mother.

The NYPD officer then begins violently yanking at the baby as onlookers watch in sheer horror. Eventually, the officers overpower the mother and get the baby away. At this point, Headley—like any parent who just had their baby torn from their arms would do—became angry, so she was threatened with a taser in her face. She was then handcuffed and arrested.

The NYPD called the incident “troubling” and then blamed Headley for causing it. They said that when officers arrived, after the 911 call, Headley refused to leave.

Because she had been there for 2 hours waiting for help, naturally, anyone would be apprehensive about simply walking out. After refusing to leave, the NYPD says that security guards then “brought the woman to the floor” and police arrested her.

Ferguson disputes the police account of the incident, however, and noted that it was a police officer who waved a stun gun and then forced Headley to the ground.

“They’re always rude,” Ferguson said about the guards in an interview with the NY Times. “They think that people that are poor don’t have nothing, so you can treat them any kind of way.”

The police “didn’t help at all,” she said. “They made it way worse.”

After the cops had this innocent mother in handcuffs, she was then brought to jail and thrown in a cage. None of the officers were ever held accountable.

As the NY Times reported last year, Deputy Commissioner Phillip Walzak, a police spokesman, said the officers involved are all assigned to the 84th Precinct and remained on full-duty status.

After spending four days in a cage, separated from her baby, Headley was finally released. After watching the video of the incident, Brooklyn District Attorney Eric Gonzalez dropped all the charges against Headley, saying he was “horrified by the violence depicted in the video.”

Below is this disturbing video. WARNING, it is extremely graphic.